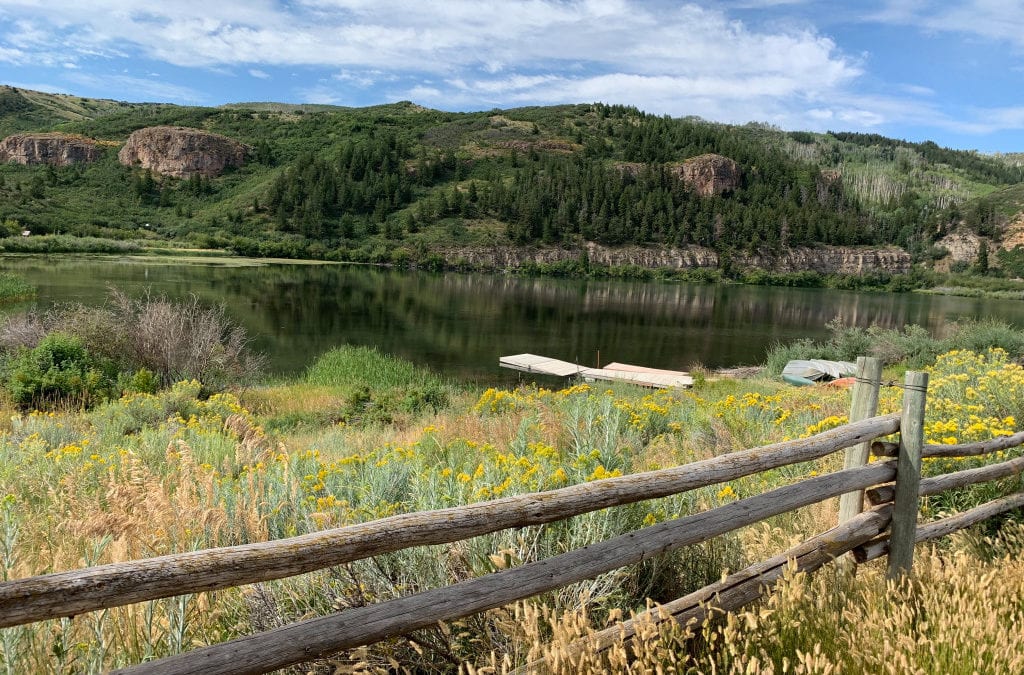 The U.S. Forest Service last week released its list of top priority land acquisitions for 2021 and the purchase of 488 acres around Garfield County’s Sweetwater Lake made the top 10.

After a year-long campaign to acquire and protect the lake and surrounding acreage in the shadow of the Flat Tops Wilderness, the Forest Service ranked the Sweetwater Lake acquisition ninth among 36 projects and asked for $8.5 million in support from the Land and Water Conservation Fund.

“Of course, you never know, but we are very optimistic,” White River National Forest Supervisor Scott Fitzwilliams said. “What often makes these things successful, in addition to being appropriate parcels, is having broad-based support and that is something we feel really good about. We have a wide range of governments, agencies and groups supporting this.”

If the federal funding comes through, Fitzwilliams hopes to partner with Colorado Parks and Wildlife to help improve and maintain a campground and boat launch at the property.

“We are looking at a new type of shared stewardship with them and how we go about this,” he said. “Everyone is really excited about that.”

For almost four decades, a rotation of six deep-pocketed owners floated big plans for the 488-acre property. They dreamed up a golf resort, private mansions and even a water-bottling plant.

Coulton Creek Capital in Greenwood Village took over the property when a Castle Rock entrepreneur’s 12-year plan to bottle and sell “Vaspen” water from a local spring evaporated. Coulton Creek listed the property in 2017 for $9.3 million.

The Conservation Fund in 2018 approached Coulton Creek Capital with a proposal to buy the property for protection. The investment firm welcomed the idea and is under contract with the fund in a deal set to close this summer.

The fund borrowed some money from Great Outdoors Colorado to support the acquisition, with the plan to transfer the property to the White River National Forest.

Federal lawmakers still need to discuss Land and Water Conservation Fund support for the Forest Service’s list of priority projects for $87.1 million worth of land acquisition. The list includes 36 ranked projects and the Sweetwater Lake property is the largest request at $8.5 million.

“While the list looks really favorable, we are paying close attention to the budgeting process,” said Justin Spring with The Conservation Fund’s Colorado office. “We are a far cry from having money in hand, but we are excited with the momentum we are seeing.”

Acquisition is only the first step in a longer plan for Sweetwater Lake. The Forest Service wants to improve a deteriorating campground that doesn’t quite reach the water’s edge. The property needs investment to host the expected increase in visitors that will come if the land around the lake is open to the public.

The Land and Water Conservation Fund is supported by royalty payments made by offshore drilling companies. In December, Congress allocated $495 million from the fund for 2020, the largest distribution in 17 years.  Colorado Parks and Wildlife has distributed $272 million from the LWCF for recreation and conservation projects in Colorado in the last 50 years. A grant for $8.5 million for Sweetwater Lake would mark one of the largest allotments from the LWCF in Colorado.

The 50-year-old fund has been fully funded to its $900 million total only twice in its history. The Great American Outdoors Act now awaiting review by the U.S. Senate proposes permanent full funding for the LWCF and the outdoor industry is unifying in a push for federal lawmakers to pass that legislation.

Passage of the Great American Outdoors Act would bode very well for the Sweetwater Lake acquisition. But the Eagle Valley Land Trust is hardly sitting back and waiting. The trust has raised more than $1 million in the last several months as part of a public campaign to save the lake. Even if the LWCF funds come through, that publicly raised money is vital for improvements at the lake, said the trust’s deputy director Bergen Tjossem.

“There is a possibility we won’t get the full funding so we need to continue raising as much funding as possible to insure we can conserve Sweetwater Lake,” Tjossem said. “The first priority for everyone involved in this is to protect the property. Once we feel good about that we can start talking about visioning and improvements. We are not there yet. We are celebrating this success, but we have a long way to go still and we need to carry this momentum.”

Adrienne Brink first came to Sweetwater Lake in 1969 for a horseback trip. She never left. Since 1975, she and her husband have run horse trips and since 1984 they’ve hosted campers at their Sweetwater Lake Resort.

“I’m so thrilled we are closer than ever to seeing this place preserved. None of the previous six owners ever had that in mind,” said Brink, who this week began welcoming visitors for short horse trips around the lake. “To me, this is a really bright light for keeping it protected and open to the public.”