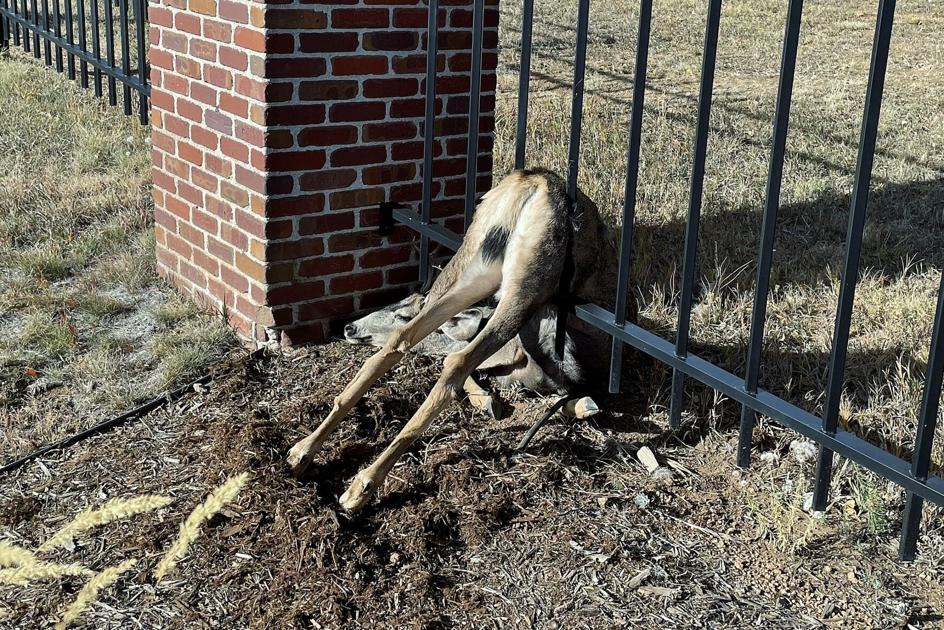 You know the fences – those metal ones with narrow gaps in the middle of thin bars that are topped with spikes. According to Colorado Parks and Wildlife, this type of fencing can be very dangerous to the state’s wildlife.

On Tuesday, Colorado Parks and Wildlife shared an image of a deer contorted and stuck in a metal fence. Though the deer looks hopeless in the image, officers were able to cut the fence and free the animal, which quickly ran off.

Sadly, many times when deer and other animals get stuck while trying to pass through fencing of this nature, they die in a panic before they’re able to get help. Or they attempt to jump the fence instead of squeezing through, which can lead to the animal getting impaled on a spike.

If you’re adding fencing (or other features) to your property in Colorado, it’s important to make sure it’s wildlife-safe.

According to Colorado Parks and Wildlife, here are some signs of problematic fences:

– too high to jump safely

– too low to crawl under without risk of getting stuck

– loose wires that can tangle or ensnare an animal

– fences that are difficult for animals and birds to see, which can result in dangerous collisions, especially when an animal is fleeing a threat

– fences on steep slopes, which can artificially increase the intended height of a fence. This can lead to animals getting into a space, but not out.

In areas where wildlife is present, it is recommended by Think Wild that backyard fences consist of natural visual barriers, such as plants and trees.

If you’ve got pets, invisible fencing can be used, though this can put pets at risk should they break free of the area and be unable to return back to their yard without a shock. Instead, consider a shorter fence to keep your pets contained, utilizing the natural barriers mentioned above, as well, for additional privacy.

Do you part to keep Colorado’s wildlife safe by making sure your fencing and other objects in your yard aren’t creating a potential hazard.