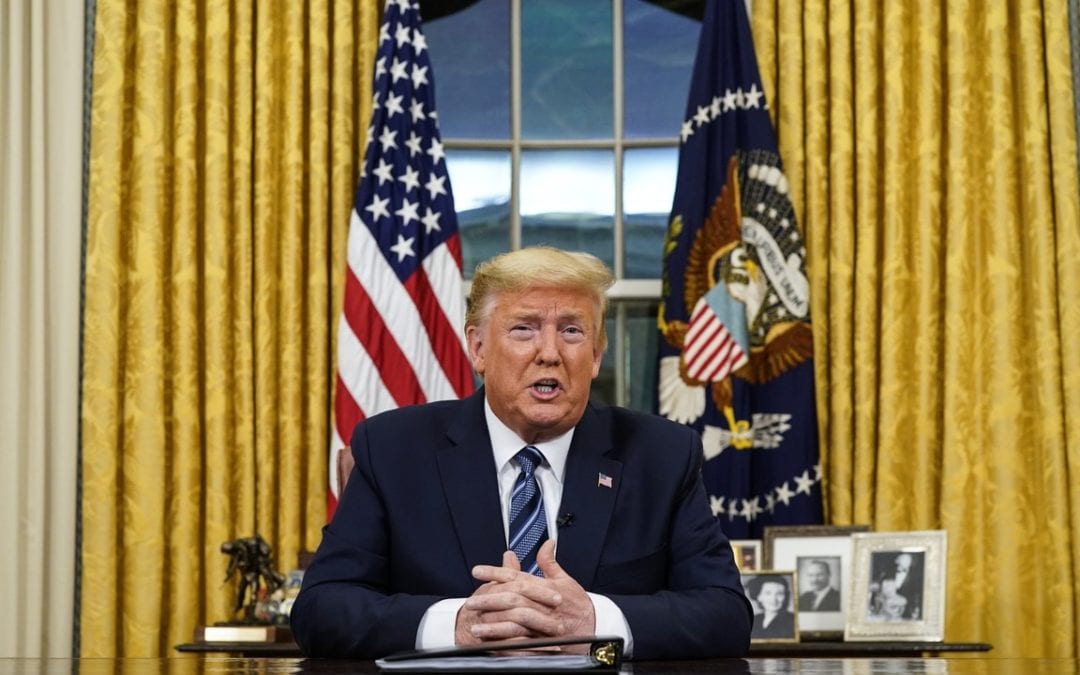 Donald Trump is failing at his own apparent top priority for the coronavirus outbreak: maintaining a strong stock market. On Thursday morning, for the second time in a week, the S&P 500 abruptly dropped 7 percent, triggering an automatic halt to all trading. The Dow Jones also dropped by 1,400 points. When the same thing happened Monday, Trump went on a Twitter rant, blaming news outlets for reporting on the outbreak that the World Health Organization has now officially labelled a pandemic.

Monday’s slump was the culmination of a couple weeks of investor anxiety, but the immediate cause for that drop was Saudi Arabia ramping up oil production in an attempt to bring down prices worldwide. The drop on Thursday is a sign that we’re on the way to a bear market, which occurs when stocks fall to 20 percent of their 52-week high—and this time Trump’s actions are directly responsible.

In a televised address from the Oval Office Wednesday night, Trump announced that he was expanding travel restrictions to include anyone coming to the U.S. from Europe to guard against what he called a “foreign virus.” He said, “The European Union failed to take the same precautions and restrict travel from China and other hot spots. As a result, a large number of new clusters in the United States were seeded by travelers from Europe.” The ban goes into effect Friday, and will apply to all European countries except Ireland and the United Kingdom, where Trump owns resorts and golf courses. Neither Trump nor the White House has given any explanation for why those two countries are exempt despite the fact that the U.K. also has cases of the coronavirus, including health minister Nadine Dorries, who announced Wednesday she had tested positive. Trump’s announcement sent investors scrambling almost immediately, as his plans appeared obviously misguided and ineffectual.

“We have seen fewer cases of the virus than are now present in Europe,” Trump added, which is a functionally meaningless statement since the U.S. has been woefully slow and inept at testing Americans. The president has been far more concerned with travel bans, like the one he announced on Wednesday, despite public health experts warning him that developing and distributing tests was far more important and effective. Trump didn’t mention testing during his address. The Department of Health and Human Services created a lengthy and burdensome approval process for labs and hospitals to access test kits, and director of the Clinical Microbiology Laboratory at UNC Medical Center in North Carolina told NBC News, “I could have tested over 1,000 patients by now instead of checking boxes.” As of Monday, fewer than 5,000 people in the U.S. had been tested according to available information. Meanwhile, the ‘s West Africa bureau chief reports that in Senegal people are receiving tests and getting results back within four hours.

While countries like South Korea and Germany are instituting drive-through testing in an effort to get as many people tested as possible, the Centers for Disease Control director Robert Redfield said Wednesday the agency has no plans to do the same. He offered a bizarre justification, saying, “We’re trying to maintain the relationship between individuals and their health care providers.” The state of Colorado has implemented its own drive-through testing sites, free of charge.

Trump apparently made multiple incorrect statements in his address that he and the White House later had to walk back or clarify, including his initial claim that the ban applied to “trade and cargo.” Late Wednesday night, he tweeted that “trade will in no way be affected by the 30-day restriction on travel from Europe. The restriction stops people not goods.” He also said, “I met with the leaders of health insurance industry who have agreed to waive all co-payments for coronavirus treatments, extend insurance coverage to these treatments and to prevent surprise medical billing.” Insurance companies have since clarified that this is not the case—they have agreed to waive co-payments for testing, not treatments.

The announced travel ban caused panic across Europe, with Americans swarming airports to get home before the ban goes into effect. Last-minute ticket prices reportedly skyrocketed, some going as high as $20,000. But apparently Trump neglected to cover the basics of this new ban in his address—acting director of Citizenship and Immigration Services Ken Cuccinelli had to clarify on Twitter that the ban does not apply to U.S. citizens, their family members, or green card holders.

The man who spent 14 years as James Bond opens up about what it took out of him, battling to finish No Time to Die, and why he’s walking away now.