Trump Says U.S. Will Suspend All Travel From Europe For 30 Days – Deadline 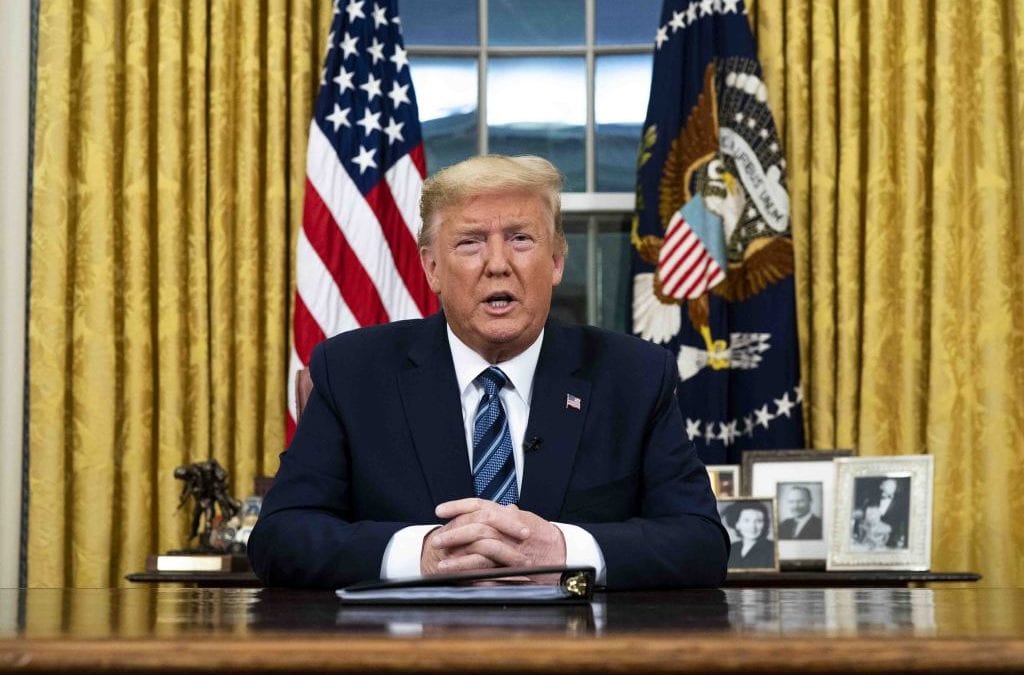 But he did not offer further details. The suspension applies to 26 European countries: Austria, Belgium, Czech Republic, Denmark, Estonia, Finland, France, Germany, Greece, Hungary, Iceland, Italy, Latvia, Liechtenstein, Lithuania, Luxembourg, Malta, Netherlands, Norway, Poland, Portugal, Slovakia, Slovenia, Spain, Sweden, and Switzerland. It bans entry of “all aliens who were physically present” in those countries in the 14 days prior to their scheduled travel to the U.S.

According to the Department of Homeland Security, it does not apply to legal permanent U.S. residents and generally their immediately family members.

The rules will got into effect at midnight on Friday, Trump said.

He said that the restrictions also would apply to trade and cargo, but his proclamation implementing the order I says that he remains “committed to facilitating trade between our nations.”

PREVIOUSLY: President Donald Trump said that the U.S. will suspend all travel from Europe to the United States for the next 30 days, one of several measures he outlined in an effort to mitigate the impact of the coronavirus.

“Smart action today will prevent the spread of the virus tomorrow,” Trump said.

Exceptions may be made to the restrictions, and they will not apply to the United Kingdom. The 30-day ban applies only to foreign nationals, not to legal permanent U.S. residents and generally their immediately family members, according to the Department of Homeland Security.

Trump is trying to calm markets and increasing fears of U.S. citizens, as more coronavirus cases rise and the economy craters.

He defended how his administration has responded to the virus, insisting that “we are responding with great speed and professionalism,” while noting that he restricted travel to China in January as the outbreak originated and spread in that country.

In his Oval Office address, a rarity, Trump said, “We are marshaling the full power of the federal government and the private sector to protect the American people. This is the most aggressive and comprehensive effort to confront a foreign virus in modern history.”

He also called it a “foreign virus,” blaming other countries for their failure to prevent its spread.

But critics, including a number of health professionals, said that the U.S. failed to adequately prepare in the weeks since, lagging behind in the development of testing kits.

Trump seemed to downplay the threat in recent weeks. As recently as Monday, he sent out a tweet that compared it to the common flu, writing, “So last year 37,000 Americans died from the common Flu. It averages between 27,000 and 70,000 per year. Nothing is shut down, life & the economy go on. At this moment there are 546 confirmed cases of CoronaVirus, with 22 deaths. Think about that!” On Tuesday, he told reporters that the coronavirus “will go away.”

In his speech, though, he not only proposed the travel restrictions but warned of risks to the elderly. He also said that he would take emergency action to provide relief for workers sidelined or forced to stay home because of the virus. He said that it will be targeted at workers who are ill, quarantined or caring for others.

Trump also called on Congress to authorize $50 billion in “economic relief” to counter the effects of the virus on small businesses, and he outlined efforts to provide low interest loans to small businesses and to provide capital and liquidity. He said that he would order the U.S. Treasury to defer tax payments for “certain individuals and businesses.”

“This is not a financial crisis. This is just a temporary moment of time that we will overcome together as a nation and as a world,” he said.