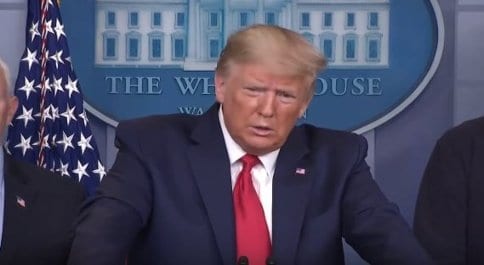 President Trump lives rent-free in liberals’ heads, sending the pearl-clutching media into a meltdown over just a tone of voice or tilt of his head.

The president’s reaction and comment on Sunday to reports that Sen. Mitt Romney was self-isolating due to the coronavirus sent journalists and media outlets off the edge as they claimed he appeared to enjoy the news.

During a press conference with Trump and his coronavirus task force on Sunday, ABC News correspondent Trevor Ault asked the president if he had had any contact recently with Sen. Rand Paul of Kentucky who just tested positive for COVID-19.

“Gee, I think it was quite a while ago,” Trump replied. “It’s been a long time.”

In a follow-up question, Ault noted that four other senators were in isolation due to concerns over the virus and recently being in contact with Paul or others who had tested positive. The president appeared surprised as the reporter named Romney, and other GOP Senators Mike Lee of Utah, Cory Gardner of Colorado and Rick Scott of Florida.

“Romney’s in isolation?” Trump interrupted Ault who was asking if Senate rules requiring in-person voting could be suspended in order to vote and pass the current stimulus package to combat the effects of the pandemic.

“Do I detect sarcasm there, sir?” Ault asked.

“No, none whatsoever,” Trump responded.

He immediately came under fire for his reaction, as critics insisted he was practically gloating over the news about Romney, who was the only Senate Republican to vote in favor of one of the impeachment articles against Trump during the impeachment proceedings.

Romney announced he would self-quarantine after Paul announced that he had tested positive for the coronavirus and just ahead of a procedural vote on the massive coronavirus stimulus package.

The liberal pack pounced on Trump over what they claimed was a dig at the Utah lawmaker who has been a vocal critic of the president.

Romney’s being extra careful in part because his wife, who has MS, can’t get sick.

As usual, Trump is meanness and selfishness personified. https://t.co/b317afsscs

The President behaves like a spoiled child .. comment about Romney ridiculous. I’m glad the reporter called him out and asked him about it.

BREAKING: Trump just found out Mitt Romney is in isolation for coronavirus, he responded by saying “Gee, that’s too bad.” What a terrible thing to say. Absolutely disgraceful. No words.

Notice how Trump cocks his head the first time Romney’s name is mentioned. You can see vindictive impulse then takes over his brain until he gets the chance to spit his vile remark. https://t.co/xmMx0Zt0b9

And Trump is laughing about Romney having it. He’s a heartless ghoul. https://t.co/xTnsEnzwN4

But many on Twitter defended the president and slammed his critics for creating a story out of nothing.

He said, Gee, that’s too bad. Asked if it was sarcasm. He said no it wasnt.

I don’t like DT .. but I didn’t get that .. he looked surprised and was asked if he meant that sarcastically.. he said no .. so idk 🤔

Good lord. Nobody knows if Romney is sick. He sat beside Paul during a lunch. He went into isolation voluntarily. Geeeezzzz. 🙄
I saw no sarcasm in his statement. He was genuinely surprised that Romney went into isolation. We need to come together at times like this.

What are you going for, @Acosta?
President Trump is not happy Romney is in isolation, because he actually cares about the people, even when they treat him like crap. He would never celebrate your being in isolation either.
Stay professional, Jim & you won’t be humiliated.

Stop trying to make everything controversial. It wasn’t sarcastic so move on…