Trump questions mail-in voting, others brace for a surge and look to Colorado for help 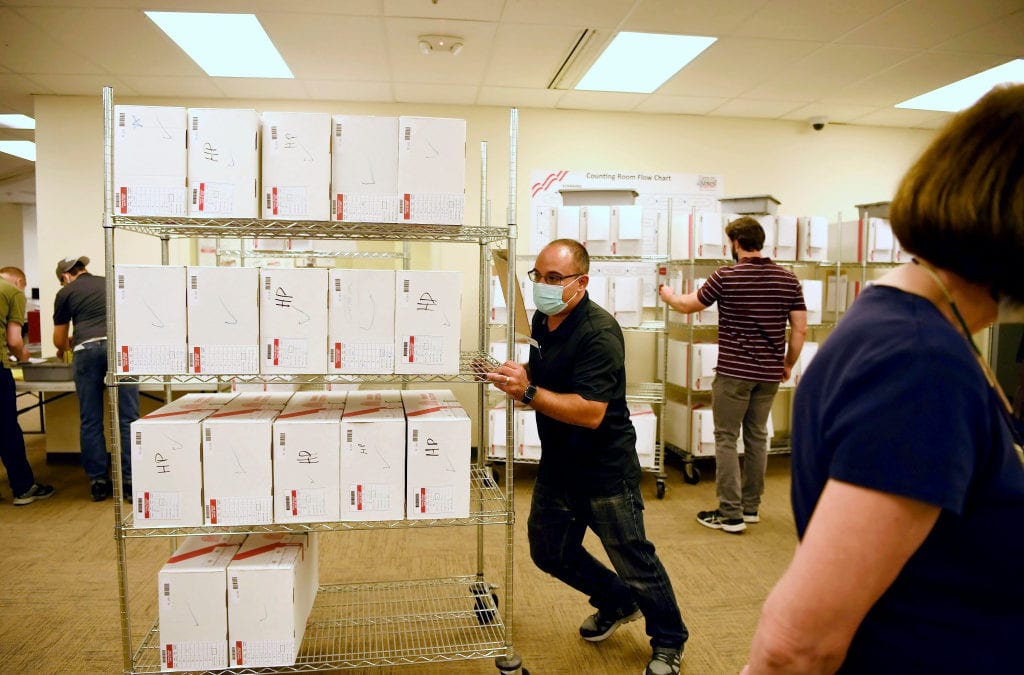 With each passing week, President Donald Trump tweets out more warnings that the mail-in election results in November will be overwhelmed by fraud and foreign interference.

Those remarks are flat-out false, experts agree, although they do anticipate varying amounts of non-malicious turbulence throughout the 45 states — and Washington D.C. — that don’t conduct their elections by mail.

Mail-In Voting is already proving to be a catastrophic disaster. Even testing areas are way off. The Dems talk of foreign influence in voting, but they know that Mail-In Voting is an easy way for foreign countries to enter the race. Even beyond that, there’s no accurate count!

The rest of the country is expecting massive turnout by absentee ballot in November — more than half of all votes cast in most states — amid efforts to avoid the coronavirus, said Michael Cornfield, associate professor of political management at George Washington University.

“There’s a surge coming. It’s like a hurricane, and it’s time to lay the sandbags,” Cornfield said. “The next few weeks are the time that can really make a difference between massive multistate problems and manageable problems.”

Many election officials have been taking that advice. Denver County Clerk Paul López said his office is constantly hosting clerks from other states who want to learn how to securely hold elections with mail-in ballots.

Still, problems during the primaries suggest some difficulties are unavoidable in states that are unaccustomed to high numbers of people voting by mail. A recent Democratic primary in New York serves as a good example.

“They didn’t have the results for six weeks,” Rom said. “There were challenges to so many ballots, election officials were not being transparent.”

Some ballots weren’t postmarked as required and others were improperly sealed, Rom said. Those problems and more resulted in a large number of discarded votes.

Kamisha Baseden proceseses mail-in ballots for Washington state’s primary at King County election headquarters in Renton, Wash., on Tuesday, Aug. 4, 2020. For Washington voters mailing a ballot or putting it in a drop-box has been the default for a decade.

But those are logistical errors, not malicious ones, Rom said.

Jocelyn Bucaro, Denver’s director of elections, said election officials should break every step of the voting process down to its most basic elements.

“They need to have really clear procedures and really good time estimates for how long it takes them to do every process,” Bucaro said.

Officials should ensure ballots are easy for voters to understand, Bucaro said. They must also understand whether state laws allow clerk’s offices to open envelopes and count ballots early. Alerting citizens when their votes are counted — if allowed in a given state — can give them confidence in the process.

Aaron Ammons, the clerk for Champaign County, Illinois, said he’s working to put as much of Bucaro’s advice in place as possible. He visited three Colorado clerk’s offices during the state’s June 30 primary, ending the evening in Denver with López’s staff.

“I learned the importance of a significant investment in the election process is well worth it,” Ammons said.

He hit the ground running back in Illinois, investing in a mail sorter and opener, color-coded sorting trays, and drop boxes, but said he needs more money from the state or federal government to finish the job.

Those changes and more are important because he’s expecting about 50,000 voters in Champaign County to cast their ballots by mail in November, 10 times normal.

Ammons is not alone. Cornfield pointed to a July report by a consortium of professors from Harvard, Rutgers, Northwestern and Northeastern universities.

Election workers go through absentee ballots at the TCF Center in Detroit on Tuesday, Aug. 4, 2020, during Michigan’s primary voting.

That’s why it’s important for states to solve as many logistical problems as possible now, Cornfield said.

Failure to smooth out the new procedures is the real danger, Rom said — not the “massive fraud” Trump has predicted.

The president’s assertions — which aren’t backed by evidence — only undermine voter confidence, said Colorado Secretary of State Jena Griswold a Democrat who frequently corrects Trump’s false comments on Twitter. She invited him to take a closer look at Colorado’s election system.

Vote by mail for all can be done by adopting the Colorado election model: voters register to vote, are mailed a ballot, and then ballots are returned via mail, drop box, or at an in-person polling center. https://t.co/DqoPDzANCh

“My DMs are open,” Griswold said.

Dear @jack, @realdonaldtrump is tweeting dangerous lies about the upcoming election. His lies about vote-by-mail violate @Twitter’s polices and should be removed. https://t.co/JLOoyONlKL

Certainly foreign governments are working to influence the 2020 election, Griswold and Cornfield acknowledged. But those tactics come in the form of social media campaigns and spreading disinformation.

Another concern could be ballot harvesting, said former Secretary of State Wayne Williams. That’s where supporters of one party collect and discard voters’ absentee ballots in a district that leans strongly the other way.

Election officials say voters should always cast their own ballot — whether by drop box, mail or in person at a clerk’s office — to avoid that risk.