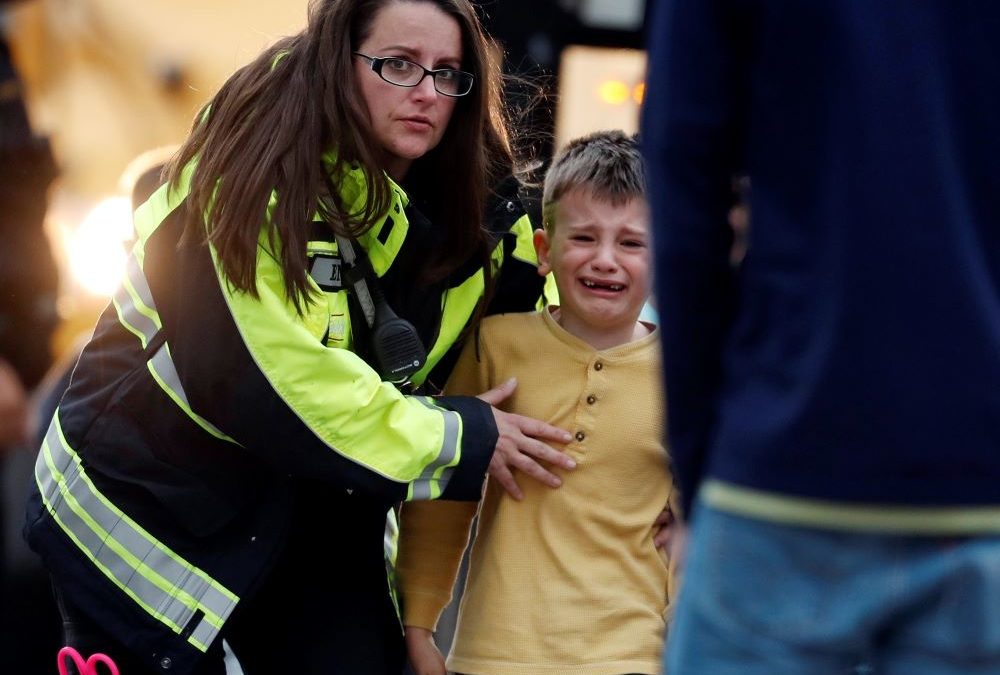 One student was killed and eight others were injured in the attack.

CASTLE ROCK, Colo. (CN) — The jury trial began on Thursday for a Colorado man accused of killing a classmate at STEM School Highlands Ranch in 2019.

Devon Erickson, then 18, was a week away from graduating when he and then-16-year-old Alex McKinney allegedly brought a guitar case full of guns to school and opened fire on a senior English class.

As he made his opening statement, Chief Deputy District Attorney George Brauchler projected a photo of the door to classroom 107 where the murder took place on May 7, 2019, following a plan Brauchler described “as diabolical as it was deadly.”

“In this room is terror. In this room is every parent’s worst nightmare,” Brauchler said. “Two students walked into this room with murder in their hearts and getting away with it on their mind.”

Eight students were injured in the May 7, 2019 attack, during which prosecutors say Erickson shot 18-year-old Kendrick Castillo. Witnesses say Castillo was shot while charging at Erickson to save his classmates. Brauchler called Castillo a hero.

Brauchler projected photos of Erickson taken in 2019 with magenta hair, a stark contrast from the man who wore a navy blue suit to court and short brown hair. Brauchler recounted Erickson’s many missed opportunities to prevent the attack and told the court that Erickson agreed to help McKinney carry out his plan so long as he didn’t have to bear the consequences.

While Erickson pulled the trigger, his attorney Julia Stancil said, “he is not a demon, he is not a monster.”

“This is a case about mental health,” Stancil told the court. “This is a case about how rapidly a young person’s ability to make sound decisions deteriorates after months of weight loss and sleep deprivation and how a vulnerable, sensitive kid was pulled into a cult play written by a deranged schizophrenic.”

Stancil painted Erickson as a confused youth, given drugs and manipulated by McKinney.

McKinney pled guilty to first-degree murder and attempted murder among other charges, and was sentenced in July 2020 to life in prison plus 38 years. Because he was a minor at the time, McKinney may be eligible for parole after 40 years.

McKinney uploaded two Snapchat videos on May 7, 2019 leading up to the attack, documenting threats made against Erickson. The guns used — a Glock 21, a Ruger rifle, a Beretta 9 mm, and a Taurus revolver — all belonged to Erickson’s stepfather.

Erickson faces more than 40 felony charges, including first degree murder. If convicted, he faces a maximum sentence of life in prison without parole. Colorado repealed the death penalty in 2020.

“The defendant is innocent until proven guilty,” Judge Theresa Slade instructed the jury of 12 and four alternates. “It is the prosecution’s job to prove he is guilty beyond a reasonable doubt.”

The trial will run through June 25.