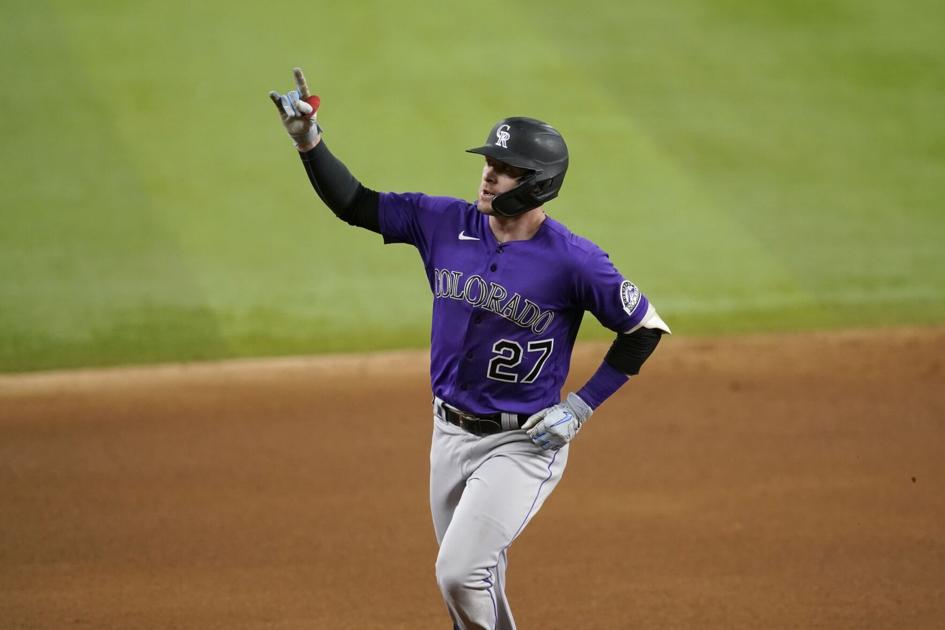 There’s nothing like coming home. And Trevor Story took full advantage of it.

Playing in front of 40 family members and friends in his hometown in the heart of Texas, Story hit two home runs, just like he did the last time he played in Dallas. That time though was in the middle of the pandemic in 2020, when games were played without fans.

On Monday, he got to put on a show for the ones he cherishes most, giving them the ‘I love you’ sign as he rounded the bases. This happened across the street from the old Rangers stadium, where he grew up attending games as a kid, dreaming of being in the position he is now.

“You feel the special occasion of it all,” Story said. “Being able to play in front of a lot of people that I really love and care about, who don’t get to see me play often, that means a lot to me.”

Story, though, was the only bout of offense for the Rockies, who got stumped by Rangers starter A.J. Alexy, who was making his major league debut after only three starts in Triple-A. The Rangers won the first of three games in Dallas 4-3.

For Story, this was another sign that his slump has come to an end. Until his double Sunday, Story was 0 for 22 and hitless in six straight games. He was dealing with left leg soreness during this stretch, which forced him to leave one game early and take another off.

It’s no secret that offensively this year has not been his best. But after the trade deadline it seemed like he had made a turn for the better, hitting .345 with eight doubles, one triple and three home runs over his first 17 games of August. His season batting average is still just .249, well below his career average.

“I want to finish this off the right way,” he said. “I know the type of player I can be on a consistent basis … it’s important to me to finish strong here.”

Rockies relievers put together a good performance, but it wasn’t enough to salvage the 4-0 deficit that Germán Márquez left behind.

Márquez’s slider in particular lacked command, and he gave up three home runs. After a dazzling middle of the season, he has a 8.85 ERA in his last four starts, giving up seven home runs during that span.

“I want to keep working,” he said. “I’m going to be better. Next month is going to be a good month.”

In the beginning of the season, he struggled with fastball command, and his walk numbers soared. This slump feels similar to him in that he thinks he’s rushing his delivery again. This time though, it’s the mistakes that have come back to bite him. There’s just been too many bad pitches, manager Bud Black said.

“If you can continue to make some mistakes, it’s the odds are increasingly you’re going to get hit,” Black said. “There were a lot of mistakes tonight, and that was uncharacteristic of a good Germán Márquez.”