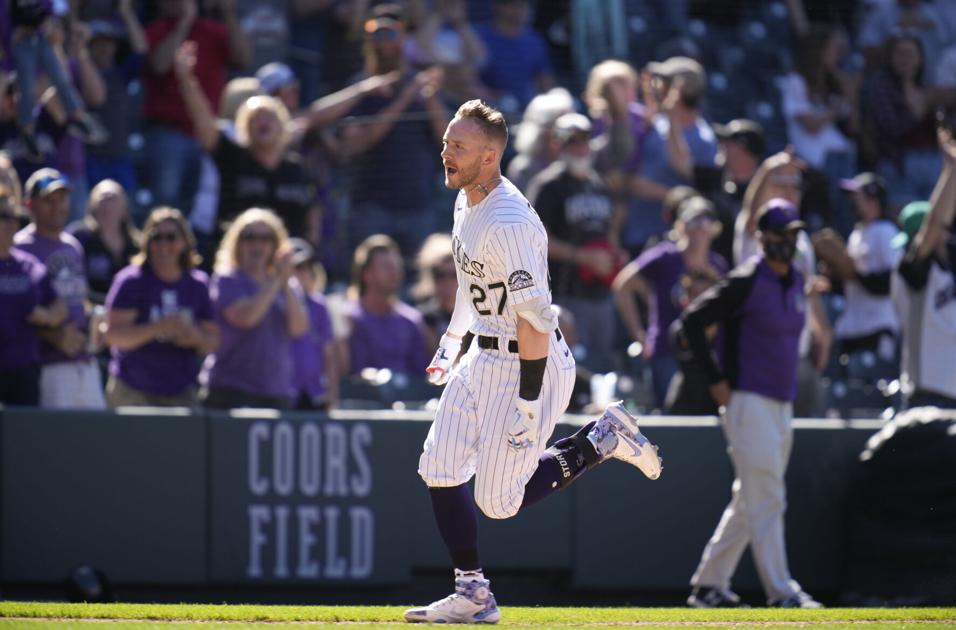 DENVER — Trevor Story was the first player on the field Friday before the Rockies started a three-game series against the Diamondbacks.

He had come back from a quick road trip to San Diego, where he had just two hits and struck out six times. He took batting practice as Rockies hitting coach Dave Magadan threw softly to him.

Story, now in his sixth year, wasn’t worried about changing his mechanics or making big adjustments. He just wanted to get back into his routine. And on Sunday, when his team needed him the most, he came up with a walk-off home run to lead the Rockies to a 4-3 win over the Diamondbacks to complete the series sweep.

With the win, the Rockies climbed out of last place and sit half a game ahead of the Diamondbacks.

“You have ups and downs and you learn to ride those waves,” Story said. “It was just one of those waves I had to ride off.”

Manager Bud Black wasn’t concerned about his shortstop either. He’s seen the development of Story over the past few seasons, and knows when it’s time to call him into his office. In this case, he knew Story just had to work it out himself.

“He never panicked,” Black said. “He never started tinkering. He didn’t do anything drastic.”

Story has also been more vocal in a young clubhouse, an evolution he started in spring training. He’s not afraid to speak up in hitters meetings, or to talk to a player individually about how they’ve been playing.

It was one of those young players — Yonathan Daza — who set up the opportunity for Story’s heroics. Daza earned a RBI in the eighth inning as Ryan McMahon scored to tie the game. Daza also had two big, diving catches that saved the Diamondbacks from scoring more runs.

“What I love about Daza, he reminds me of a dirt-bag player,” Jon Gray said. “He’s going to fight tooth and nails for every ball. He’s going to get dirty doing it. He’s just a playmaker.”

For Gray, business went on as normal after his last start, when he wanted to “flush” the 10 hits and seven runs he allowed in San Diego. He started out with a bang, needing just seven pitches to get through the first inning. He carried a perfect game into the fifth before giving up a hit — a single to David Peralta.

In the sixth, things started to go astray. He allowed two walks, then a sacrifice fly to Ketel Marte that scored a run. If it hadn’t been for Daza’s diving catch, that likely would have led to more runs. Pavin Smith hit a home run, putting the Diamondbacks in the lead 3-2.

Gray went fastball heavy, relying on that pitch over 50 percent of the time. His slider gave him trouble in his last start, and he used it less than normal Sunday.

His early exit meant the Rockies needed three outings from the bullpen — a task that seems daunting considering the way the group has been playing. But Lucas Gilbreath gave up just one hit in the seventh, and Jordan Sheffield needed just 10 pitches to retire three batters in the eighth.

“It’s great experience for these two in a close game,” Black said. “Those two guys are a big part of our future and games like this can really do a lot for them.”

After allowing two runners to reach base, Daniel Bard calmed himself in the ninth to give Story the chance to walk-off.

The Rockies head on a seven-game road trip. They are 2-17 away from Coors, and will start the trip by facing a depleted Mets team missing five of the regular eight starters.

“I feel like a lot of good is coming,” Gray said. “We definitely didn’t start the way we wanted to. I think the more time you see stuff happen like today, it’s building up. We’re that close to rattling off 10 wins.”