Traffic goes by fast, but this historic mule train refuses to fade in Colorado Springs 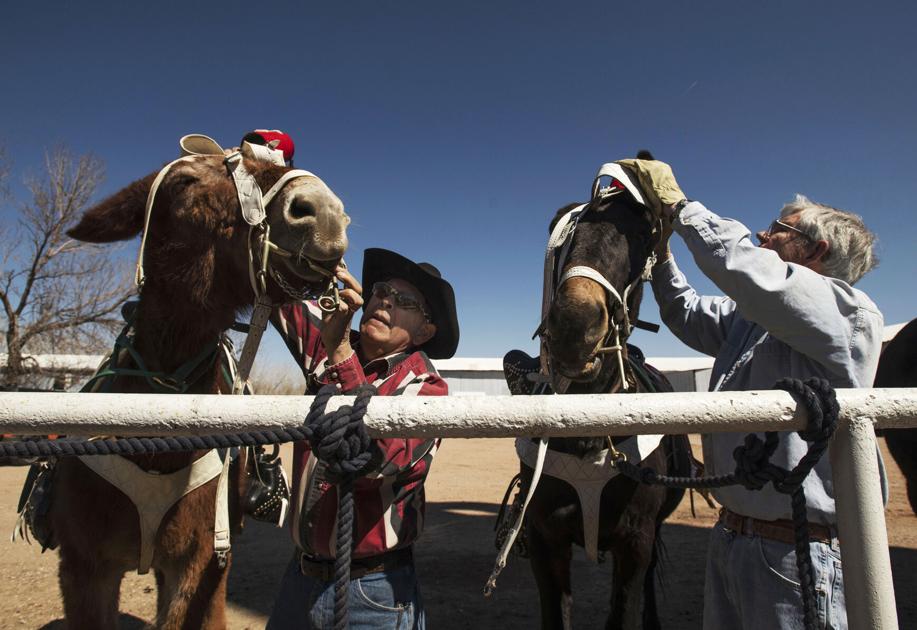 The Al Kaly Shrine Mule Train in Colorado Springs raises awareness and funds for Shriners Hospitals for Children by parading in events and competing in drill competitions. (Video by Skyler Ballard)

Traffic roars up and down Interstate 25 on the south side of Colorado Springs, but it is quiet here inside an adjacent clubhouse displaying trophies and pictures of decades gone by.

Jim Johnson is looking at one of those photos. It’s from 1983. “Look at all these members,” he remarks.

There are 27 in a row with their mules — uniformed men and steeds representing a colorful, historic group.

Today, there are nine riders. Johnson is among them.

To the unaware driver, it is an obscure, curious title seen along the interstate: “Al Kaly Shrine Mule Train” announces the barn’s face, impossible to miss beside the red brick silo.

One might trace Al Kaly — pronounced “kuh-lie” — to a phone number in Pueblo, the unassuming base for southern Colorado’s chapter of Shriners International. The man on the other line doesn’t get many calls, but he’s come to expect inquiries about the mule train. “I get more calls about that than anything else,” he says.

The Al Kaly Shrine Mule Train riders raise awareness and funds for Shriners Hospitals for Children by parading in events and competing in drill competitions. Membership in the Shriners is on the decline.

The mule train is no mystery to Shriners, members of the 150-year-old fraternal society rooted in philanthropy and fun. Members have been drastically dwindling. And so to a growing number of commuters on I-25 — and indeed to a growing number of outsiders across America — Shriners and their whereabouts are vague, including their support of children’s hospitals and their various “units.”

The mule train unit is different. Across all of Shrinedom, it is believed to be the last of its kind.

Mule Carol Beth wears a traditional Shriners Fez at the Al Kaly Shrine Mule Train riders in Colorado Springs on April 1, 2021. The mule riders raise awareness and funds for Shriners Hospitals for Children by parading in events and competing in drill competitions. (Chancey Bush/ The Gazette)

While different in style — an homage to the military’s former mounted commands — the goal is the same as the tiny car drivers and clowns. Mule riders raise awareness and funds for Shriners Hospitals for Children by parading around and performing against other drill teams on horseback. Along the way, they revel in kinship, partaking in regular meals and practicing routines around these 27 acres of pasture off the interstate.

While they enjoy the one-of-a-kind distinction, they also enjoy a certain visibility hard for any other Shrine club to achieve. That’s been the case since the 1970s, when mule riders acquired the former dairy farm beside the expanding highway.

And yet, the visibility hasn’t reversed a troubling trend.

“Membership decreases every year,” says Allan Ake, vice president of the mule train and Al Kaly Shrine member since 2003. “This (chapter), when I joined, there was something like 1,500 members. We are now staring at about 500.”

This matches a long-going downturn for Florida-based Shriners International.

In 2006, The Tampa Bay Times reported membership had reached a 50-year low of 540,000. At the time, the Shriners were “an institution in crisis,” according to the newspaper, which chronicled the brotherhood facing accusations of hazing and misogyny, all while ranks were aging and old rituals and rites were being reconsidered to meet the modern age. The Times cited a poll predicting the organization would not last through the 2020s.

In the 15 years since then, the spotlight has dimmed on the Shriners. Membership reportedly hovers around 200,000.

It costs money to be a Shriner, dues and donations for the hospitals. And there are more financial and personal commitments to maintain a unit like the mule train, the unit’s president, Johnson, recognizes. There’s tending to the animals and land, the farm buildings and equipment, the traveling.

The mule train finds itself at the intersection of civic involvement and equine hobby — both of which have been broadly declining in the 21st century.

Johnson is retired like almost all other riders of recent years. A portion of membership is connected by ranching backgrounds — men in the city longing for rural boyhoods — while another portion shares military ties.

“After I retired from the Army, I needed a mission,” Johnson says. “This became the mission.”

That mission: “To keep this organization alive.”

Shrine membership was its strongest in the years after World War II and the Korean War, when soldiers returned home looking for fellowship and purpose. It was around this time the Al Kaly Mule Train was born.

Army pack mules were being phased out in favor of machines, including at what was then Camp Carson in Colorado Springs in 1957. There happened to be some Shriners from those mounted units. Rather than let the animals go to auction, they purchased 28 to establish the mule train.

The years went on with other notable parades at Rose Bowls and Fiesta Bowls, along with local appearances at Army-Air Force football games. There was a baseball game in Kansas City. A mule celebration in California. A patriotic ceremony in Tennessee. Drill competitions all over.

In 1992, the group was invited to Leadville for a reunion of 10th Mountain Division veterans, who had trained in the area with mules during World War II. Group history recalls old men teary-eyed at the reunion: “Some had not seen a mule since the war.”

The emotional connection lasts for riders today. Debbie Dupont has seen it, the mule train’s longtime caretaker living on the land off I-25.

“It’s almost like therapy for them,” she says. “They come down, and if they do nothing but brush the animal, it did a lot. People do that with horses, and guys here do that with their mules.”

“Some are stinkers, and some are sweethearts,” says Carol Krutzke, whose husband rides.

Some indeed live up to the stubborn reputation, says Dupont, who spent decades working with horses before mules.

“I find the most difference is the fight or flight response,” she says. “Mules think about something before they spook, whereas a horse will spook and then think. Horses are quicker to leave. … If a mule gets caught in a fence, they won’t fight like a horse. They’ll stand there and think about it.”

All are part of the family that members describe — “kind of cliche,” Ake admits.

But how else to describe the camaraderie? All of those family meals, the cross-country trips with spouses, the drill victories and celebrations, the calls for help always met.

The good times roll. They’re preserved at the clubhouse in grainy photos on the walls and more in albums. Johnson looks at them now, feeling inspired.

Like time, the traffic outside keeps moving. The city steadily encroaches on this slice of country. But the men, like the mules, are stubborn and unmoving.