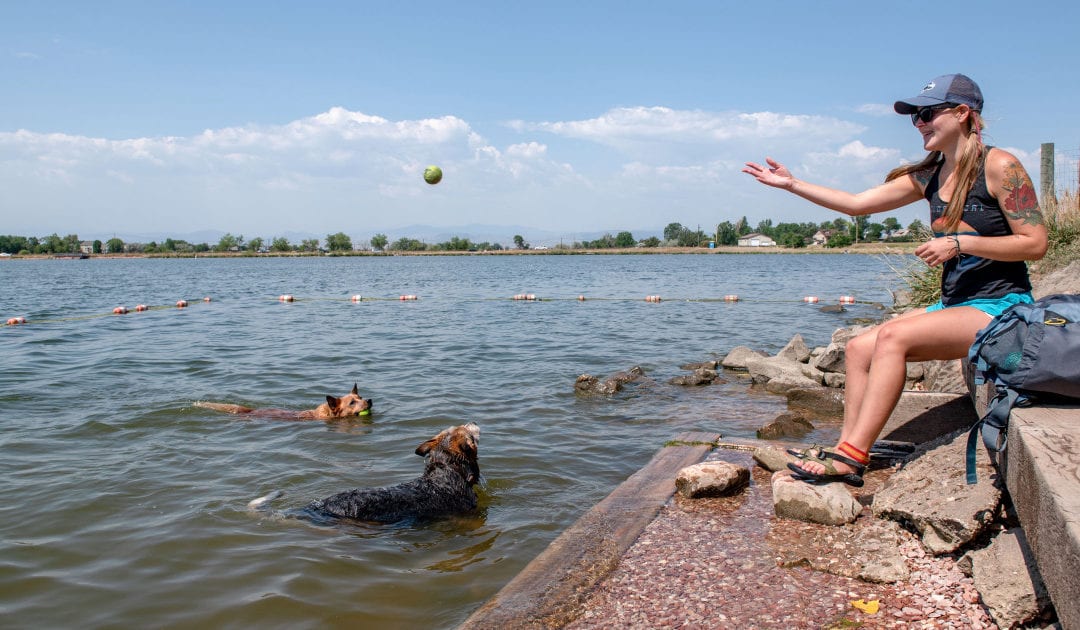 WINDSOR — It’s already baking hot on a smoky August morning when Sarah Erickson leans off the side of the dock and dips her tube-shaped monitoring device into the lake.

The water quality specialist for the state health department, who is wearing Chaco sandals and shorts, is sweating under her face mask. The greenish-brownish water of Windsor Lake is warm, too — about 76 degrees near the surface. Erickson is not shocked.

A few blobs of algae float near the dock, but those are the harmless filamentous green variety, not the kind Erickson is concerned about. “It can look gross and smell gross, but that’s not the kind that is going to produce the toxins,” she said. Erickson is looking for blue-green algae, a toxic algae that — in high amounts — can sicken humans and kill animals.

Water scientists call blue-green algae an “emerging contaminant.” They don’t know too much about it yet, other than that it thrives in warm, stagnant water and that Colorado water quality scientists seem to get more calls every year about lakes with green slime or a turquoise film that looks like paint spreading across the surface.

So far this summer, biologists from the state health department and Colorado Parks and Wildlife have detected blue-green algae blooms at Cherry Creek Reservoir in Denver, Prospect Lake in Colorado Springs, Barr Lake near Brighton and Steamboat Lake. The warmer the lakes get, and the more nutrients available to feed the algae, the more prone they are to toxic algae blooms. August and September are typically the worst months.

Windsor Lake, where families dropped fishing lines off the dock Wednesday and dogs splashed through the water at the beach-side dog park, has no blue-green algae this year. But city and state officials are closely watching the lake, which was closed for about a week last summer after a bloom was discovered in late July.

Erickson, who monitors the water quality at lakes across the state, is taking periodic water samples at Windsor to see whether the blue-green algae returns. She tucked a small glass bottle of the lake water into a red Rubbermaid cooler labeled “HAB,” for harmful algae bloom, and took it to the lab at the Colorado Department of Public Health and Environment.

The key measurement is a lake’s level of microcystins, the most common toxin produced by blue-green algae in Colorado. Health officials recommend lakes close to recreation if the level reaches 8 or higher, a measurement in parts per billion. Whether the lake closes is up to whatever agency manages or owns the lake.

At Prospect Lake in Colorado Springs, that level has reached 78 this summer, and the banks look like pea soup.

The city-owned lake was closed for 12 weeks last year after water-quality scientists determined in August 2019 that there had been a toxic algae bloom. The lake, popular with boaters and paddle boarders, didn’t reopen until late October.

This year, water-quality specialists were on the lookout for a return of the algae, and started treating the lake in June with enzymes that eat up the biomass at the bottom of the lake — the algae’s food source — and help oxygenate the water. But it was too late.

The toxic algae returned earlier than expected. Colorado Springs officials noticed the telltale green film along the lake’s edge in mid-June. A water test June 16 found the lake was already at level 22 on the microcystin scale. The large, shallow lake remains closed as levels have fluctuated from 7 to 78, depending on the wind and where the samples are taken, said city spokeswoman Vanessa Zink.

Fishing is still allowed, though fishermen are urged to gut their fish and wash them thoroughly. Studies have found that the toxins settle in the organs, mainly the liver. But more studies are needed, Erickson said.

Pikeview Reservoir also has blue-green algae this summer, though the toxin levels are much lower than at Prospect Lake. And the toxic bacteria was detected this month in Bear Creek Reservoir in Jefferson County.

The state health department began monitoring the blue-algae problem only in 2018, so water-quality specialists don’t have historical data to prove the situation is growing worse. The volume of calls, though, has definitely increased over the last several years, said officials at CDPHE and the Colorado Parks and Wildlife.

The state health department hired Erickson after receiving legislative funding two years ago for a blue-algae monitoring program, but authorities have noticed for the past decade that reports of toxic algae — also called cyanobacteria — were rising, said Sarah Wheeler, manager of the department’s environmental data unit.

Reports of what looks like pea soup, strings of seaweed or turquoise paint streaks on the surface of the water are pouring in from private landowners, homeowners associations and municipalities.

Only long-term data will determine whether toxic algae is blooming more frequently in Colorado’s lakes and ponds, or whether the higher volume of calls is due to people becoming more aware of toxic algae in the last few years. While there is no definitive evidence — such as a conclusive necropsy — that blue-green algae has killed a dog in Colorado, algae-related dog deaths in North Carolina, Georgia and Texas have made headlines.

A few Coloradans have reported to veterinarians and state health officials that their dogs died shortly after swimming in algae-filled water, but cause of death has been hard to prove. “We have some possible reports,” Erickson said. “Of course, dogs being dogs, they can get into all kinds of things.”

For humans, the health effects of swallowing the toxins produced by the algae most often materialize as vomiting, nausea, irritated eyes, rash and difficulty breathing. But a person would have to ingest quite a lot of water. (It’s worth noting that this naturally occurring toxic algae is different than the cultivated kind sold as a health supplement and known as Spirulina.)

“If you were swimming and you swallow a little bit, most likely you are going to have some gastrointestinal symptoms,” Erickson said. In one extreme case, dozens of dialysis patients died in Brazil in 1996 after the water used in their treatment was contaminated with blue-green algae toxins.

“When in doubt, stay out,” Erickson says.

A few national studies have shown the blue-green algae problem is getting worse, linking its rise to global warming, but Erickson said it’s too soon to definitely answer that question for Colorado.

So far this summer, she’s gotten 13 calls from private citizens and municipalities about toxic algae and she’s taken 12 samples. The calls are on pace with last year, when the state health department had 35 calls and took 90 samples by the end of the season.

The lab tests to determine the microcystin level is the most definitive, but other measurements that Erickson can take at the shore with her water-quality sonde offer clues about whether toxic algae is present. A bloom can result in higher pH readings and increased dissolved oxygen levels at the surface.

During the day, algae are producing oxygen, while overnight, they consume it. If the lake is starved of oxygen, its fish could die in massive numbers.

Blue-green algae feed on nitrogen and phosphorus, which can end up in lakes and ponds through runoff. The main culprits are pet waste, as well as lawn fertilizer and deicers that people spread on their sidewalks.

The algae tends to appear first on a lake’s downwind shore because they’re blown there by the wind, said Mindi May, water quality coordinator with the water section of Colorado Parks and Wildlife.

“A lot of folks will call me and have pictures of long, stringy algae on a rock and it’s not that,” said May, who is currently monitoring blooms at Steamboat Lake and Barr Lake. “The color is not a good indicator,” since blue-green algae is sometimes blue, sometimes green, sometimes turquoise.

Cherry Creek Reservoir, another lake managed by state Parks and Wildlife, had a bloom earlier this summer that temporarily closed the beach. It’s now been resolved, thanks in part to a water destratification system that oxygenates the lake and circulates the water so it’s not so stagnant.

Even water-quality specialists can’t tell if the algae is toxic just by looking at it.

The simplest, by-the-shore test is to put it in a plastic water bottle and shake it up, May said. If the algae floats to the top, it’s almost always blue-green algae, which contains gas bubbles. If it sinks, it’s likely regular non-toxic green algae, she said.

Spores of the blue-green algae are likely surviving in some lakes year-round. They bloom — which is too pretty of a word to describe it, though May says “it can be pretty” — when the organism gets enough nutrients and “the right conditions come along.”

“The biggest thing is if you see algae and you don’t know what type it is,” she said, “keep your dog away.”