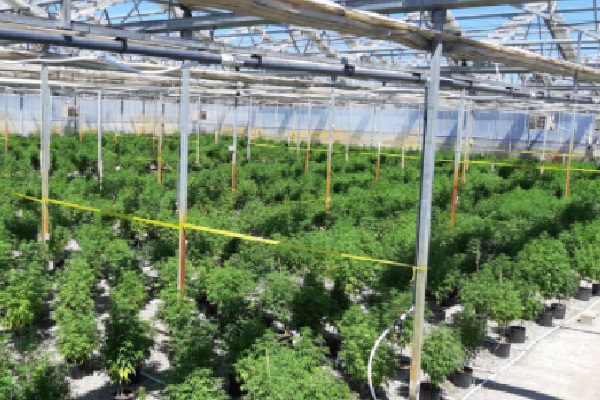 Colorado was the first state to legalize recreational cannabis consumption for adults (alongside Washington state), which means this state’s cannabis industry has enjoyed the most amount of time to grow and mature. As a result, cannabis entrepreneurs operating within Colorado state lines have been able to develop businesses that boom.

Because there are way too many Colorado dispensaries to name — and because everyone has their own preferences when it comes to the cannabis retail experience — here are the top 10 grow operations in the Centennial State, ranked by potency, yield, square footage and more.

The second-largest grow operation in the entire country, Mammoth Farms boasts a huge complex of greenhouses, warehouses and outdoor cultivation spaces that total an astonishing 3,484,800 square feet — which is over 32 hectares or 80 acres. Though Mammoth Farms does have its own dispensaries around Colorado, it uses its unparalleled cannabis production to stock other dispensary shelves, too.

GW Pharmaceuticals is one of the few grow operations in Colorado that is passionate about more than cannabis. A global biopharmaceutical company, GW has invested in cannabinoid research since 1998, and it is one of a small handful of companies to develop an FDA-approved medicine derived from weed — Sativex, which is a THC and CBD medication used for pain management. GW has an 18-hectare cannabis greenhouse in Colorado, which is larger than 33 football fields.

The Green Solution is already one of Colorado’s most prolific cannabis retailers, with 21 dispensary locations around the state. However, thanks to an infusion of funding from investors eager to capitalize on Colorado’s successful industry, TGS has been able to create three enormous indoor grow houses, totaling over 250,000 square feet as well as a 140-acre outdoor cultivation complex.

Native Roots began in 2010 with a tiny 17,000 square foot cultivation facility, which produced goods for one boutique dispensary. Today, Native Roots has generated over 90,000 pounds of flower, and its vertical integration has allowed the company to scale up to over 21 retail locations without abandoning its small-batch, home-grown feel which Colorado cannabis consumers crave.

One of Colorado’s oldest cannabis companies, LivWell has grown into Colorado’s largest seed-to-sale business — meaning it grows its products in its own cultivation facilities. LivWell is so well-known that it was the first cannabis brand to secure a celebrity-endorsed product, from none other than stoner-in-chief Snoop Dogg. LivWell has expanded into other states with recreational cannabis laws, and the company is making moves into Canada, as well.

While MiNDFUL isn’t the biggest cannabis seller in Colorado, it is among the fastest growing. This dispensary has locations in both Colorado and Illinois, and it stocks its store shelves from one central facility measuring 43,000 square feet. Unlike other grow ops, MiNDFUL prioritizes the health of individual plants, preferring to give their crops space rather than crowd them together for higher yields.

Not to be confused with California’s Med Men — a dominant cannabis retailer exploding across the West Coast — Medicine Man is a smaller Colorado operation that has nonetheless made smart marketing moves. In addition to a reality series on TRU TV chronicling the challenges of building a cannabis business, Medicine Man has created an $11.5 million production facility, which includes cultivation, extraction and manufacturing for the company’s three dispensaries. Plus, Medicine Man recently acquired Los Suenos Farms, which was the country’s largest outdoor-only grow op at 1.42 million square feet.

Euflora is an up-and-coming cannabis cultivation and dispensary company in Colorado. Rather than hiding its grow op, Euflora invites consumers to tour its facilities — an experience not unlike a winery tour, replete with samples of fresh bud, snacks and 420-friendly transportation to and from the site. Though the greenhouse isn’t enormous, at just 7,000 square feet, it is enough to stock Euflora’s four dispensary locations and busloads of tourists.

Like many growers on this list, Green Dragon got its start in retail, and after finding success, the company moved into cultivation. However, instead of setting up its own grow op, Green Dragon consolidated with Greenwerkz, its sister brand, to take full advantage of its cultivation infrastructure. Like other Colorado brands, Green Dragon has expanded into other legal cannabis markets, most recently eying Florida’s booming medical marijuana scene.

Maggie’s Farm is said to be one of Colorado’s premier sources of recreational and medical marijuana!  All their products are grown in the fresh mountain air, nourished by some of the best sunlight in the state along with organic, mineral-rich soil to help each plant grow to its full potential.