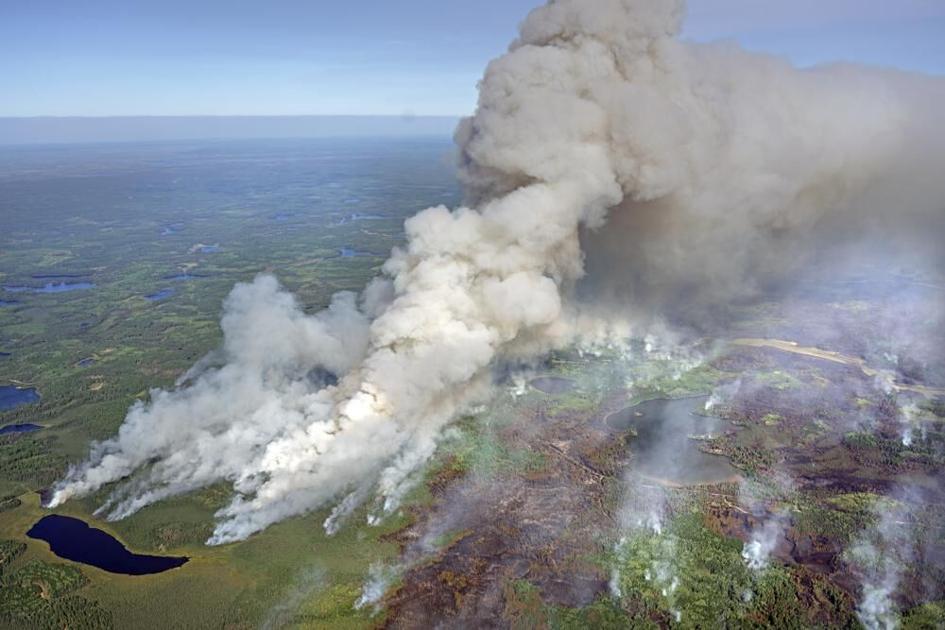 ISABELLA, Minn. (AP) — Officials in the Superior National Forest said Thursday that the ongoing drought has created “tinderbox conditions” in northeastern Minnesota as firefighters continue to battle an uncontained wildfire, while rain that’s expected to fall in coming days is unlikely to provide much help to crews who are growing tired.

Crews have been working on fighting and suppressing wildfires since the spring, and Minnesota’s wildfire season is not likely to end until snowfall.

The Greenwood Lake fire has already burned 25,991 acres (40.61 square miles) in Minnesota’s Arrowhead region. Incident Commander Brian Pisarek said 12 seasonal homes or cabins are among the more than 50 structures that have been lost. Pisarek said about 300 people are currently evacuated.

“We got a little bit of rain today so we don’t expect much fire growth today,” he said Thursday, adding that firefighters are using the day to prepare for winds that are expected to come on Monday. So far, more than 400 firefighters are working to contain the fires, and more help has been requested.

But Pisarek said rain that’s expected to fall in the area over the next few days is not likely to help much with containment.

“One of our tactics is to remove the fuel in front of the fire on the east side, and this rain, of course, inhibits us from doing that,” he said. “You’d think rain would be the best thing we could get — but timing of the timing of the rain is also critical to our operation.”

“This firefight is dependent on the weather,” he added.

Meanwhile, one North Carolina family is questioning whether they did enough to mitigate fire risks on land they own, as the drought-stricken forest had been already weakened by an outbreak of spruce budworm, which decimated the area’s balsam fir trees.

Robert C. Hayes Jr., of Charlotte, North Carolina, whose extended family owns about 12,350 acres, or 20 square miles, at the Greenwood Lake fire site, told the Star Tribune: “I’m afraid to go up there because the pictures I’ve seen. It’s just scorched.” A Star Tribune analysis of property records shows more than half of the Hayes’ forest land appears to be inside the fire perimeter.

Duluth photographer and writer Michael Furtman likened the situation to throwing a match on acres of dried-out Christmas trees. Furtman, who owns a cabin on Middle McDougal Lake, adjacent to the Hayes property, said he and his wife spent an estimated $2,000 to hire workers to cut down dead trees and remove potential tinder.

“We are actively asking that of ourselves,” he said.

Hayes’ family has owned the land for 30 years and wanted it to be “a canvas for the moose and the wolf and the environment.” The land is technically held by Lake County Land & Timber LLC, which is owned by a trust for the benefit of Hayes’ father, Robert Cannon “Robin” Hayes, a former congressman and North Carolina Republican Party chairman who pleaded guilty in 2019 to lying to the FBI in relation to a bribery scheme. Former President Donald Trump pardoned him in January.

Robert C. Hayes Jr., a trustee and head of the family office, said professional foresters help manage the trust’s forest holdings, including one in South Carolina. He said the trust worked on fire management at the South Carolina forest, but not in Minnesota. He said the trust let the Minnesota property go natural so it could reach maturity. While the family was aware of problems with the spruce budworm, reducing the fire risk was not brought up.

“It was never discussed that it was fuel building up for forest fires,” he said. “I guarantee you it will be moving forward.”

Forest officials announced this week that they will keep the popular Boundary Waters Canoe Area Wilderness closed until Sept. 3, dealing a blow to tourists who spent months planning their trips there and to the outfitters and other businesses serving the 1 million-acre wilderness.

Cummins said Thursday that the area, or maybe parts of the Boundary Waters, would reopen once it is safe.

Several fires caused by lightning have burned in the wilderness during this summer’s drought conditions, while the much bigger Greenwood Lake fire just to the south has forced the evacuation of about 280 homes and cabins since it was spotted Aug. 15 about 15 miles (24 kilometers) southwest of the town of Isabella.

Fires burning just across the Canadian border, in Ontario’s Quetico Provincial Park, led officials to close some parts of the Boundary Waters north of Ely earlier this summer. But when the John Ek fire took off late last week, forest officials decided to close the entire wilderness area as a precaution. They said that fire and the Greenwood Lake fire had stretched their resources too thin to ensure the safety of paddlers and campers.

Cummins said the John Ek fire is “kind of a time bomb” because if conditions are right, it could make a run toward the Gunflint Trail.