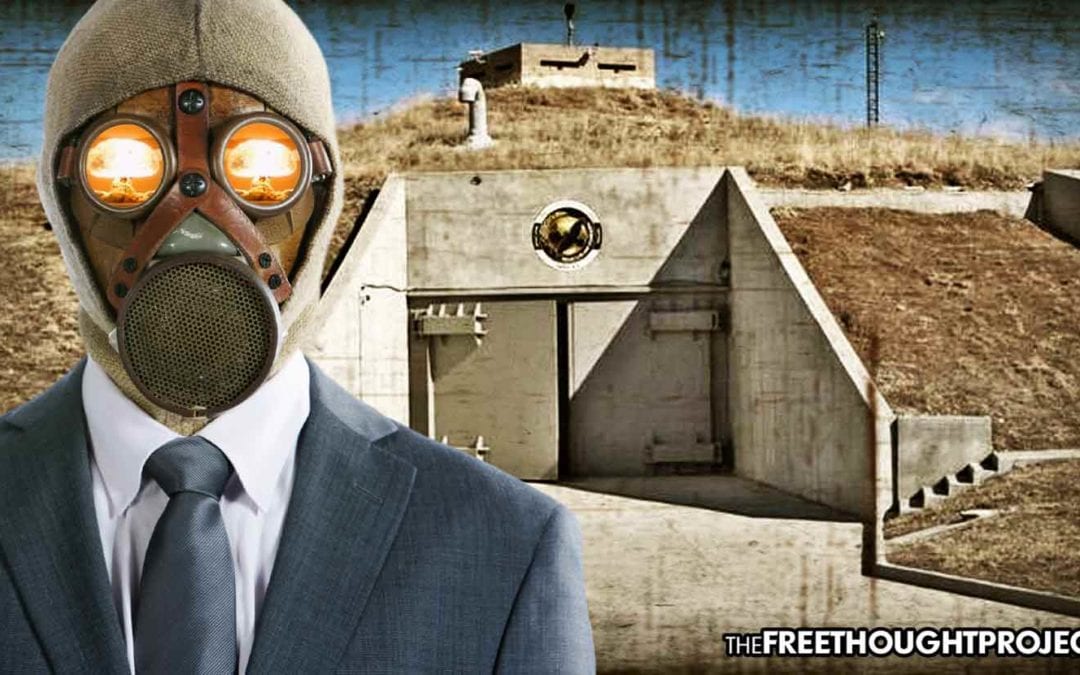 As coronavirus fears continue to peak and the serfs fight each other over pallets of toilet paper at Costco, the world’s elite aren’t taking any chances. According to a report out of the Guardian, this week, the super-rich are preparing to self-isolate in the face of an escalation in the coronavirus crisis. But their plans extend far beyond stocking up on hand sanitizer and toilet paper.

The world’s elite are hopping on their private jets and taking off to private bunkers across the world. As the Guardian reports:

Many are understood to be taking personal doctors or nurses on their flights to treat them and their families in the event that they become infected. The wealthy are also besieging doctors in private clinics in Harley Street, London, and across the world, demanding private coronavirus tests.

Doctors in London are reportedly being secretly contracted by concerned elite to get tested for coronavirus before they move to their bunkers. This testing is in spite of the fact that Britain’s NHS said it would only test people with a “high chance” of having the illness – meaning people who had had close contact with a confirmed case or who had recently gone to a high-risk country.

Mark Ali, chief executive and medical director of the Private Harley Street Clinic, said: “This has led to huge demand from very wealthy people asking if they can pay for private testing. Unfortunately, we are unable to offer testing, as the NHS has said all tests should be done centrally.”

Although Ali claims the tests are not being done on random rich people who request it, a source told the Guardian that is not the case.

Also, chief executive of the private jet company, PrivateFly, said the elite are booking his services at a far higher rate as people flee high-risk countries.

“Many are from groups which include elderly passengers or those with health conditions that make them particularly concerned about exposure to crowds on airline flights. We’ve just flown a group back to London from the south of France, with an immunocompromised passenger on board,” he said.

Apparently, the elite are allowed to fly while the commoners are told they cannot. As TFTP reported on Monday, as coronavirus cases continued to rise in Italy, Italian officials began rolling out police state measures. If citizens attempt to flee the country to avoid such tyranny, they face jail. Anyone leaving the “containment regions” risks three months in prison, or a fine of up to 206 euros ($234), Luciana Lamorgese said on Monday.

On Wednesday, the US took similar measures, banning all flights to Europe.

Some elite may be a little late to the game, however, as the Guardian reports:

Robert Vicino, founder and chief executive of Vivos Group, a California-based company constructing underground shelters designed to withstand a range of natural disasters and catastrophes, said his firm had seen a surge in inquiries and sales since the crisis took hold.

Vivos has converted a a cold war bunker in Indiana into accommodation for 80 people, and is offering space in 575 concrete bunkers in an abandoned second world war ordnance depot in South Dakota.

As TFTP previously reported, the theory that the super elite have turned into “Doomsday preppers” stockpiling supplies in preparation for the end of the world as we know it, is more than just a theory, and the latest properties purchased by the world’s top billionaires give insight into how they plan to survive.

The cause of such an event is debatable—will an asteroid collide with Earth, or will nuclear warfare break out between two colliding super powers?

Forbes Contributor Jim Dobson noted that in addition to “preparing for future escape plans with ‘vacation homes’ in remote locations,” and “private planes ready to depart at a moment’s notice,” some of the wealthiest individuals in the U.S. are buying large amounts of land that can be used for self-survival.

Dobson also noted that this type of preparation extends worldwide to moguls in Australia and New Zealand who are buying massive amounts of farmland. Because money and precious metals would be virtually useless following a major disaster, self-sustainable territory and the tools that come with it appear to be the new hot commodity.

The series of “Doomsday maps” produced by Gordon-Michael Scallion with the Matrix Institute give insight into what the world would look like if a massive Asteroid or comet collided with Earth, and led to a polar shift that resulted in a cataclysmic change. While it is all still speculative, NASA’s Asteroid watch website estimates that such an event could happen as early as 2021.

As The Free Thought Project reported, the concept of the super-rich preparing to survive a worldwide disaster is nothing new—former Facebook product manager Antonio García Martínez and Reddit CEO Steve Huffman are among the moguls openly preparing for a major crisis.

“I think, to some degree, we all collectively take it on faith that our country works, that our currency is valuable, the peaceful transfer of power—that all of these things that we hold dear work because we believe they work. While I do believe they’re quite resilient, and we’ve been through a lot, certainly we’re going to go through a lot more,” Huffman said.

The U.S. government is also preparing for the worst. In March 2012, former President Obama signed an executive order titled, “National Defense Resources Preparedness” into law, giving agencies such as the Department of Homeland Security, Department of Agriculture, Department of Labor and Department of Defense the authority to seize resources, materials and facilities it deems necessary to ensure national defense.

Do not mistake TFTP’s reporting on elite fleeing to their underground bunkers as ‘fear mongering’. We are simply putting this information out to keep our readers informed. Being prepared for emergencies is not panicking, it is smart. However, waiting until their is an actual emergency before you prepare is not a good idea. The government will not keep you safe. If anything, the crashing markets, the panic buying, the lockdowns, and travel bans are proof of the facade that is “government promised safety.”

That being said, whether a worldwide crisis is caused by an asteroid hitting the Earth, a nuclear war breaking out, or Covid-19, the decisions made by the elite should always act as signals for the public. When the individuals who already have massive amounts of money are preparing for a time when money is no longer valuable and self-sustainable farmland is the most precious resource, then it is time to start paying attention.