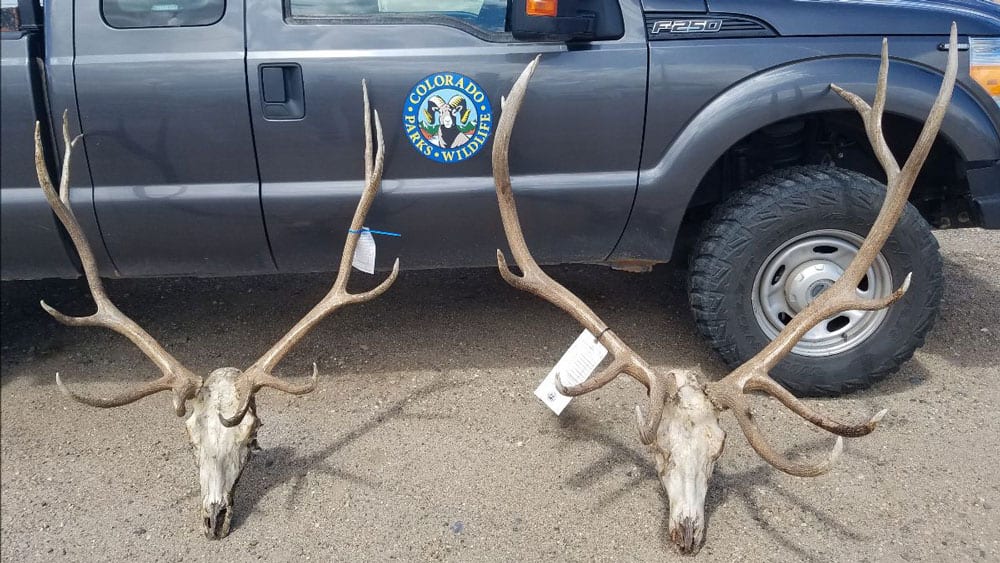 Below is a from Colorado Parks and Wildlife.

Three Meeker residents have been sentenced for the poaching of two trophy bull elk last fall. The case began on Sept. 25, 2019, when a witness in the Sand Wash Basin area reported a wounded bull elk and a suspicious truck to Colorado Parks and Wildlife Officer Jeff Goncalves.

Goncalves responded and found evidence that eventually led to a truck owned by 18-year-old Henry Musser of Meeker. Questioning of Henry Musser and further evidence gathered from his vehicle and home led officers to the involvement of his father, John Allen Musser, also of Meeker, as well as a juvenile offender. Information was gathered about a second bull elk that was poached by the three suspects. Officers also determined that John Musser had taken efforts to hide evidence in the case. Citations related to the case were issued on March 19, 2020 and all three individuals entered guilty pleas last week in Moffat County courtrooms.

The poaching incident on Sept. 25, 2019 occurred in an area along Moffat County Road 67 in Sand Wash Basin. The area is part of Game Management Unit (GMU) 2, which is a highly valued trophy unit where hunters may wait more than 20 years to draw a license. The second elk was poached a few days prior to Sept. 25th. Both elk that were killed are large trophy elk, meaning fines in the case were enhanced under the state’s “Samson law.” The “Samson law” is named for a popular and quite visible, 1,000 pound bull elk that was killed illegally in Estes Park in 1995, leading to public desire for higher penalties in egregious poaching cases.

“The Sand Wash case shows the importance of witnesses in helping be the eyes of wildlife across the vast and remote parts of the state,” Goncalves said. “We can’t be everywhere but there are many people recreating and traveling the back roads who can report to us anything they see that is suspicious.”

People who witness a wildlife crime or hear about them after the fact are integral in solving many cases. The Operation Game Thief (OGT) hotline allows for anonymous information and cash rewards. A program called TIPS, or Turn In Poachers, is also available and can provide opportunities to hunt trophy units for people who provide information that leads to a conviction in trophy poaching cases.

John Allen Musser, 44, pleaded guilty and received a deferred felony sentence for tampering with evidence. In addition, John Musser pleaded guilty to hunting without a license, illegal possession of wildlife, and aggravated illegal possession of wildlife. John was ordered by the court to perform 48 hours of community service and pay $15,483.50 in fines and court costs.

The juvenile in the case entered a plea of guilty to hunting without a license, hunting with an illegal method of take and hunting big game without an adult present. The juvenile will serve unsupervised probation, must perform 48 hours of community service, and pay fines and court costs of $1,962.50.

In addition, all three were ordered to forfeit hunting equipment. They will also face a separate administrative hearing process where they will be subject to the loss of hunting and fishing privileges in Colorado and 48 other states.

Colorado Parks and Wildlife officers and investigators deal with an average of 4,000 wildlife violations each year ranging from fishing without a license to large wildlife poaching cases.

“Coloradans value their wildlife and we’re proud of the law enforcement officers at CPW who work hard to conserve those populations for everyone’s benefit,” explained Bill deVergie, Area Wildlife Manager for the northwest corner of the state. “Cases like these come down to citizens watching and reporting when they see or hear something. We thank the citizens who knew what to do when they noticed the poaching activity in this case.”

The Rocky Mountain Elk Foundation is increasing the visibility of poaching incidents in an effort to reduce poaching nationwide.