Three observations: Aztecs struggle on the road against Colorado 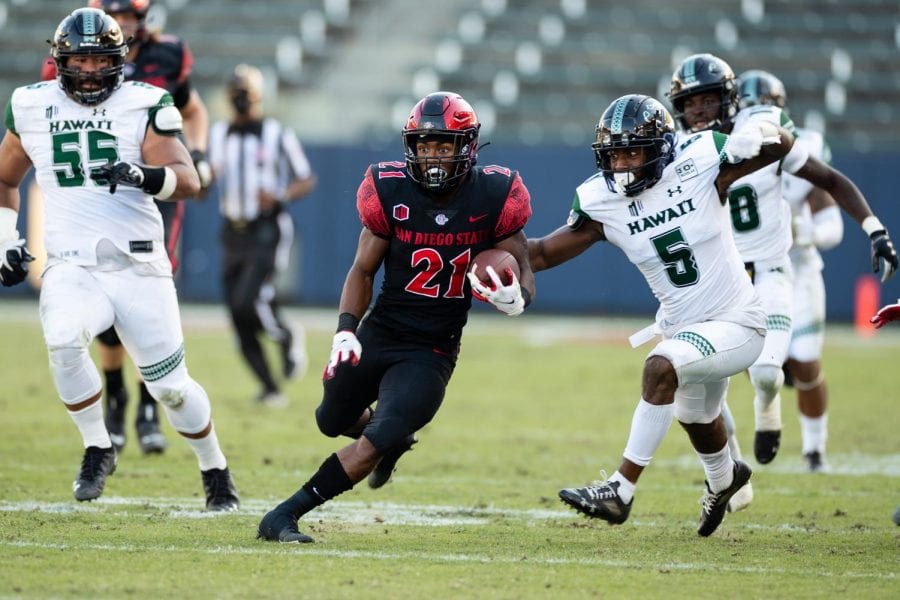 San Diego State football lost to the Colorado Buffaloes by a score of 20-10 Saturday afternoon, bringing the Aztecs to a record of 3-3 on the year.

Both teams had just two days to prepare, as the game was scheduled Thursday due to prior COVID-19 game cancellations for both programs. Colorado was able to outplay SDSU enough on both sides of the ball to come away with the win.

Here are three observations from the Aztecs’ second consecutive loss.

With junior graduate starting quarterback senior Lucas Johnson out with a hamstring injury, head coach Brady Hoke turned to sophomore Carson Baker and junior Jordon Brookshire to go under center in his place.

Hoke said he went into the game intending to use both quarterbacks.

“As we went through the week, and really all the way until Thursday, we were hoping for Lucas,” Hoke said. “(We) weren’t sure if that was going to happen. (Offensive coordinator) Jeff (Hecklinski) did a good job getting the other two guys ready at the same time.

“We decided that we would play both of them and see who reacted well and who played well. I think we’ve just got to keep honing in at that position.”

The Aztecs struggled to get anything going offensively in the first quarter and for much of the second.

However, thanks to a pick-six from junior cornerback Darren Hall and a field goal from sophomore kicker Matt Araiza, SDSU was able to head into the locker room down by only four points.

Prior to the drive that cut Colorado’s lead to four, the Aztecs were only able to muster 31 yards of total offense.

The second half wasn’t a night-and-day difference, but the offense was at least able to put itself in a position to get back in the game on certain occasions.

The offense was able to produce a drive that gave them a chance to cut the lead to four, but a missed field goal attempt of 50 yards from Araiza kept the score at 17-10 with just over 13 minutes left in the game.

Another drive later in the fourth quarter would give Araiza a shot to cut the lead by three, but his second miss on the night was essentially the nail in the coffin for SDSU.

The Aztecs have been used to staunch defensive performance so far this season, however this game proved to be a test for SDSU.

After an 83-yard opening touchdown drive for Colorado and a 63-yard drive in the second quarter, SDSU was staring at a 14-0 deficit with seven minutes left to go in the first half.

The defense also committed some costly penalties that gave Colorado second chances, including a holding penalty by senior safety Tayler Hawkins that gifted the Buffaloes a first down on a 3rd-and-20 in the second quarter.

Sophomore defensive lineman Cameron Thomas was frustrated by the penalties and said the defense has to be more disciplined.

That drive would eventually result in a touchdown pass by Buffaloes’ senior quarterback Sam Noyer to junior wide receiver Jaylon Jackson to double Colorado’s lead to 14-0.

Thanks to the offense’s 10-point swing at the end of the first half, the Aztecs stayed in the game entering the second half.

Only surrendering two field goals in the second half, the Aztecs’ defense seemingly did everything in its power to keep themselves in the game.

The biggest defensive stand of the night came with about 7:30 left in the game, when the Aztecs forced the Buffaloes to punt out of their own end zone, putting the offense at the 40-yard line.

Unfortunately for SDSU, the defense couldn’t pick up the offense’s slack.

Hall said the team must come together to correct mistakes and look forward to the next game.

“Every loss is tough,” Hall said. “We go out there and do it together as a team, and we come out not with the victory, it hurts as a whole. Other than that we just go back on the drawing board this weekend and we try to come back with a win next week.”

One of the Aztecs’ strengths this year is their ability to rush the ball at will.

With senior running back Greg Bell out due to an ankle injury, the rest of the SDSU running back corps wasn’t able to get anything going against Colorado.

The Aztecs were only able to produce 79 rushing yards on the night. For a team that averages 246 rushing yards a game, 79 certainly isn’t what the Aztecs are used to.

Factoring in SDSU’s poor passing performance (only 76 yards), Hoke attributed the rushing struggles to an overall tough night for the offense.

“I think we talk about (blocking) when we have success.” Hoke said. “It’s the backs, it’s the line, it’s the receivers, the tight ends, the second-level, third-level. It’s really all those things: not executing as well as we would like to.”

The Aztecs are scheduled to play Colorado State at home next week on Saturday, Dec. 5. The Rams have dealt with their own COVID-19-related issues, but Hoke said the Aztecs are anticipating the game will go on as scheduled during the postgame press conference.