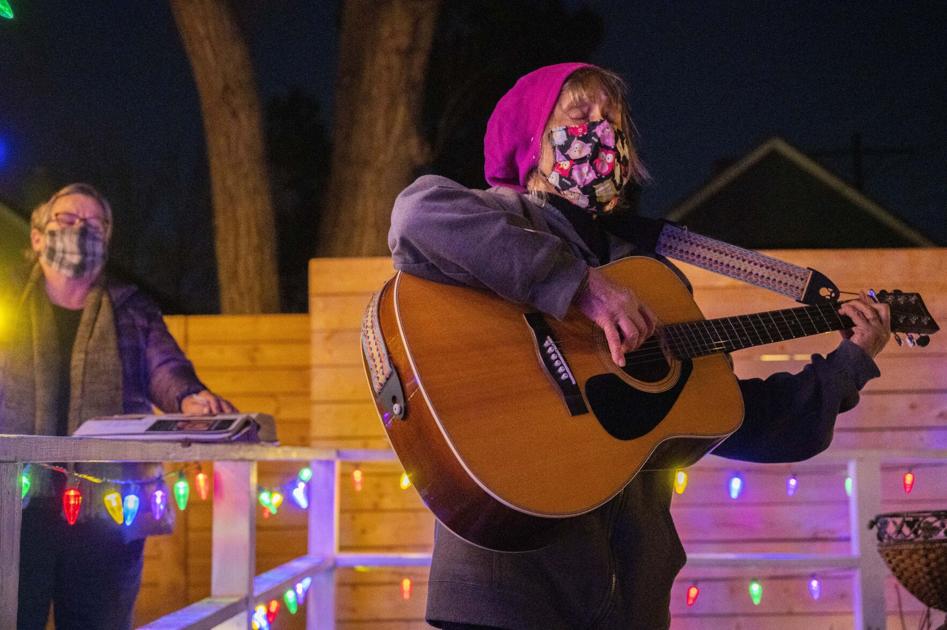 Many people had noticed Joseph Harris on the streets of downtown Colorado Springs, where he lived for years.

They probably didn’t know much about him. But they may have seen the large cross he wore around his neck as he walked around.

“Seventy-five percent of us ran into Joseph at one time or another on the street,” Mary Lynn Sheetz said Monday night at an annual remembrance vigil for the homeless. “He was always talking about spiritual things and goodness.”

Harris had cancer, but he never discussed his problems or sought help, she said. “He just died one day.”

His ashes were laid to rest in a hole in the ground at a columbarium for the homeless on the city’s west side during The Longest Night service held on the winter solstice.

Harris represented one of an estimated 40 homeless people who died in the past year in El Paso County.

“We remember,” about 25 people who attended the event murmured after names of the deceased were read.

“All of us have worth, all of us have value, all of us are loved and lovable,” the Rev. Randy Rentner, associate pastor at Sacred Heart Catholic Church, said in offering a blessing. “We declare their lives had worth and meaning.”

Harris’ name is now in The Book of the Dead, a scrapbook Sheetz began compiling in the 1970s to chronicle the homeless who have passed on.

Last year, around 30 names were read off at the Longest Night vigil. In 2018, 61 people died while homeless, according to the El Paso County Coroner’s Office.

“We hope the people that died homeless and alone find peace, wherever they’re at now,” said Steve Handen, a founder of the yearly event hosted by a group known as The Bijou Community, whose members started the city’s first soup kitchen and several transitional housing programs for recovering addicts, former prisoners and homeless people.

The Bijou Community built the columbarium in 1993 at one of its housing projects, to be used specifically for the remains and in memory of those who died without a place to call home.

“This ends up being a voice for the homeless, who didn’t have a voice on the street,” said Ed Achtenberg, who buried Harris’ ashes and runs one of the group’s transitional homes. “We’re honoring them and commemorating them, on the longest night the homeless spend out under the stars.”

Similar events are held every year in communities across the nation on the winter solstice, the shortest and darkest day, when the chill of the cold is hard to shake off.

“It’s important we get together to remind ourselves that homelessness is not inevitable — it’s a choice we make as a society,” Sheetz said. “We think we can end homelessness by tearing down low-incomes homes and forcing people to leave, but we forget we all have to live somewhere, and shelters are not the solution.”

Organizers say the timing of the observance helps people realize how miserable it would be to sleep outside under a bridge, in an encampment, in a car or in a shelter or motel room.

“The reason there are people that die homeless is that we don’t have enough affordable housing, and I’m not talking about shelters,” said Esther Kisamore, a member of The Bijou Community and a longtime local social advocate.

“So often we talk about the deserving and undeserving homeless,” she said. “We don’t have enough of the services they need.”

Along with affordable housing, treatment for substance addiction and mental illness are the most needed services for people who don’t have an address, Kisamore said.

“People are willing to donate money to something like the expansion of Springs Rescue Mission, and that means more jobs for social workers and other nonprofit employees, and people pat themselves on the back,” she said. “But we’re not looking at the real societal problems and the solutions.”

Like others, people on the streets die from accidents, sickness, exposure, drug overdoses, natural causes, self-inflicted means or at the hand of others.

But instead of taking their last breath in a bed or a home, they perish on railroad tracks, beneath bridges or in camps, fields, parking lots, roadways, drainage ditches or motel rooms.

“Their names matter. They matter to us,” said Sarah Stacey of Ithaca Transitional Housing, another project of The Bijou Community.

Many people without homes don’t want to sleep in emergency shelters and prefer to sleep outside, even though there’s the risk of exposure to the elements and other dangers. There were at least 135 empty shelter beds Sunday night, according to the city’s log of shelter accommodations.

In times of economic and societal difficulty, those who are already living on the margins suffer the most, El Paso County Coroner Dr. Leon Kelly said.

“That’s always tragically evident in our work at the Coroner’s Office,” he said.

The COVID-19 pandemic is no different.

“As we look towards economic and public health recovery in the setting of vaccine distribution, decreasing deaths in our homeless population will be one of the important measures of success of those efforts,” Kelly said.