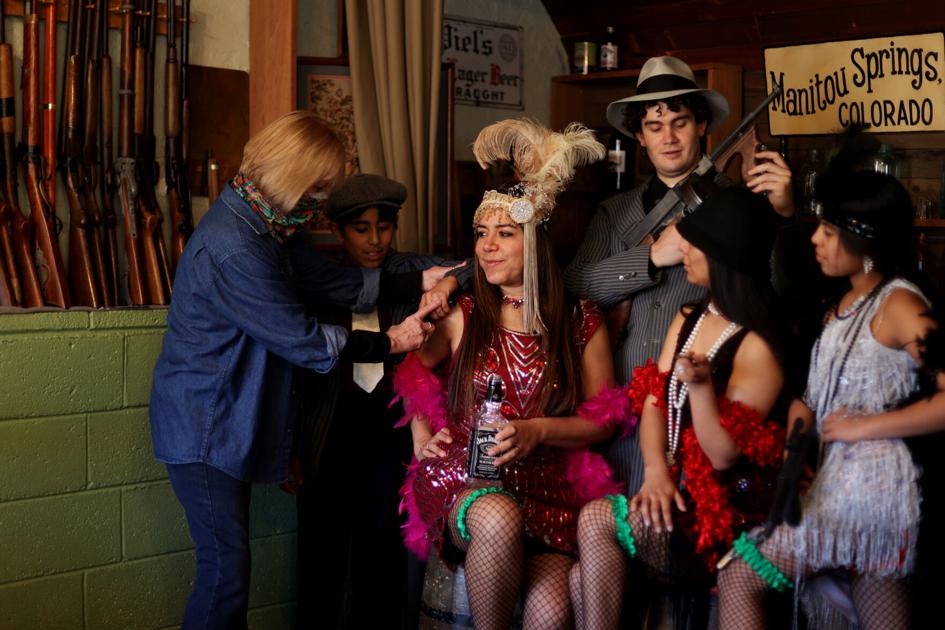 Walking inside this shop, it’s no surprise to see dozens of sepia-toned photos on display. It’s a little surprising to hear the squawk of a parrot.

That would be Tony, the African grey parrot that greets visitors to Olde Tyme Photography in Manitou Springs.

He goes to work every day with Jessie Cormaney, who owns the photo studio with her husband, Doc. Every morning, Tony asks if it’s time to go to work. He also frequently lets out a “Go Broncos!”

Tony isn’t the only thing to behold in this place, which brands itself a “congress of curiosities.” The walls are crowded with vintage signs and paintings. There’s racks of clothing emulating the wardrobes of cowboys and flapper girls and gangsters and Victorian Era ladies and gentlemen. To go with each, there are piles of props like jewelry and guns and chaps and stacks of hats.

It’s at this point, after a customer has said hello to Tony and taken in the store’s quirky surroundings, that Cormaney asks something like, “So, who do you want to be?”

The chance to transform into someone else — from a faraway era — is why people seek this place out or stumble in while strolling this Manitou strip. Not just that. They also want the printed-out photo to remember what it felt like.

Olde Tyme Photography has survived here for more than 40 years, serving as a success story on its own as well as a testament to the enduring affection for these places some would call cash grabs. Olde Tyme, Cormaney says, is more about honoring the past. And giving something people to remember.

“We make memories is what we do,” Cormaney says. “When people leave, they made a memory.”

Against many odds, including the fact that most of us have a virtual photo booth in our pockets, this industry — built around playing a nostalgic sort of dress-up for the sake of a souvenir — lives on.

Other old-time photo studios have come and gone in Manitou Springs and around the state, which is now home to less than 10 of the establishments. They’ve become a mainstay for amusement parks and tourist towns like Gatlinburg, Tenn.

Suzanne Restle, a photographer and former television producer, opened Oh! Susanna Vintage Photo Parlour as a Christmas-themed pop-up five years ago in Golden. She now runs the business out of a storefront on the city’s main strip.

Restle says her studio stands out from commercialized studios that “are strictly in the souvenir business” and “literally snap a picture and print it out.”

“I’m really an artist who likes to play,” she said. “I won’t let something walk out the door that doesn’t look good.”

With an affinity for history, she aims to create realistic sets and costumes. Restle often spends an hour with customers testing out different poses and sets. She also pays attention to the editing, like adding little scratches to make a photo appear aged.

As for the people in front of the camera, everyone’s there for different reasons. Some are obsessed with history and others are searching for something fun to fill an afternoon. “A lot of the women just want to look sexy in a corset,” Restle adds. And a lot of the boys — and men — want to play with the guns.

The whole experience tends to leave a lasting impression.

“It’s fun to see yourself in a different way,” Restle said. “It makes you think, ‘This is what I would’ve looked like in that time period.’”

Restle says Colorado’s roots have helped her studio draw attention and visitors from across the state.

“For a lot of people, if you’re coming to Colorado, you’re looking for some connection to the Wild West,” she said. “They want nothing more than to be allowed to play in that world.”

Sometimes, they almost forget why they’re here. For that photo. A photo they might keep forever.

Restle’s own mother is a good example of that. When her family lived in Woodland Park, they’d always make a trip to Olde Tyme Photography when people were visiting. Restle’s mother’s bathroom is still full of photos from those visits.

“We just loved going there,” she said.

This is the kind of thing Cormaney hears all of the time.

There have been proposals and annual family photo shoots at her studio. Locals come in after a few drinks at the next-door bar, Townhouse, or to celebrate a birthday.

Tourists make up the majority of customers. During the busy summer season in Manitou, lines weave out the door of the studio.

When they come in, they’ll see something near the cash register. It’s a little rhyme Cormaney wrote years ago as a response to customers worrying too much about how they looked in their photos.

“Fun” is the reason Cormaney found herself here in the first place.

Doc opened the shop in 1979 “for giggles,” she says. Back then, she was the pretty girl pouring drinks at the bar across the street. She moved to Manitou that year as a way to escape Chicago.

Soon after she met Doc, she started hanging out around his studio.

“There was a whole mystique about the place,” she said.

She started dressing people up and lending her photography skills. Soon, she quit her job as a dental assistant.

Since then, she’s provided fun for so many others. Cormaney has hired a small team, so she can start to step away from the business. She and Doc hope to travel and “get away from it all.”

As she said that, the shop’s assistant manager, Nina Neuenschwander, pointed out that’s why some people walk in their door.

“It lets people go to another time,” she said. “It’s fun to be somebody else for a little while.”