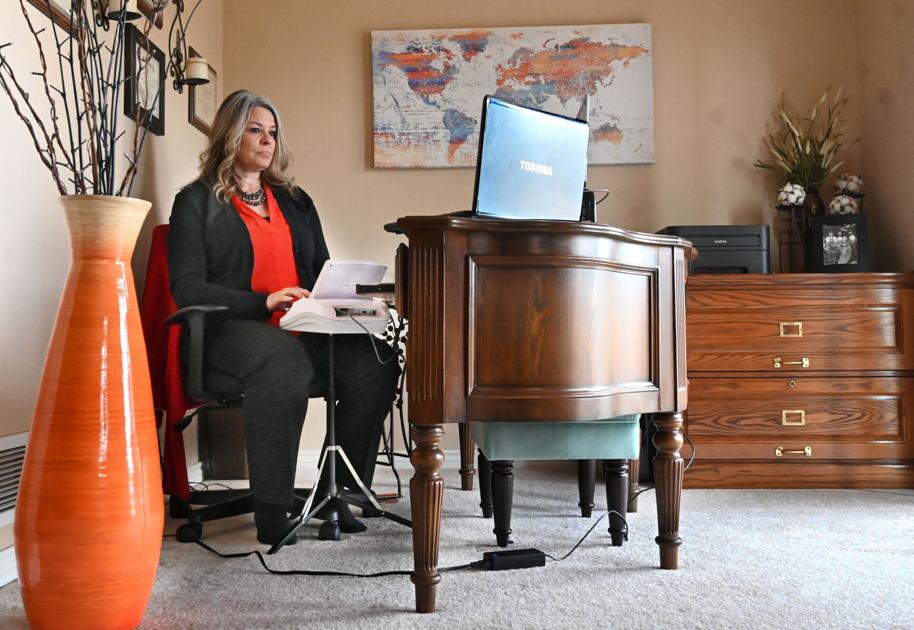 They are the courtroom officials with lightning-fast fingers and a mysterious machine, the silent sentinels of the record whose voices go unheard until some other courtroom voice is unclear, or bears repeating.

But get Suzanne Geislinger going on her favorite subject when she’s not in court, she’s got plenty to say. And, probably, you’ve got a lot to learn.

“If you and I were standing together and we were at a party and I said, ‘Oh, I’m a court reporter,’ you would right away say, ‘You’re one of the people that has that little machine,’ and then you’d wiggle your fingers. People always do,” said Geislinger, who works for El Paso County’s 4th Judicial District based in Colorado Springs.

That would be the point in the conversation where she explains what you’ve been missing, about a machine that’s more tiny piano than typewriter and an ancient public service field that, today, is actively recruiting new members.

Court reporter Tracy Boulais captions on her stenotype machine while working remotely from home on Monday, Feb. 1, 2021. (Photo by Jerilee Bennett, The Gazette)

“The average age of a court reporter in Colorado is 51. And many of us are getting to the age of retirement. Who’s coming up? There’s really going to be a hole there,” Geislinger said. “Everybody thinks that it’s a job that used to be and no longer is … but it’s still here and it’s just an awesome, fascinating job. It amazes me that more people don’t jump into it.”

The Association for Court Reporters and Captioners established Court Reporting and Captioning Week (2021 tagline: “all you need is love and steno”) to help encourage more people to honor, and consider, a quiet profession that doesn’t often get its due.

“They do an extremely important job for the courts and trial attorneys, and they’re not really appreciated until they’re not there,” said Colorado Springs attorney Kevin Major.

Court reporters use a stenotype machine to record testimony, verbatim and real-time, complete with ums and ahs, during court hearings and trials. They have offices in the courthouse and work at judges’ sides — or, in pandemic times, virtually from home offices — and their shorthand, typed on a squat machine with 22-unmarked keys, is instantly translated into a transcript that can be read, and understood, by all.

“Every finger is assigned two letters, except the little finge,r which gets four. I’m writing not letters but words. I write syllables,” said Geislinger, adding that certain combinations of strokes can produce a phrase faster than it can be uttered.

Not every court proceeding has a court reporter. Some are taped and typed up later by transcriptionists. Major said that those transcripts often can include “inaudibles, mistakes or just blanks.”

“I’ve had some where they just forgot to turn the recorder on, so they lost an entire trial,” he said. “I have so much confidence in the transcript of a court proceeding if it’s from a court reporter, as opposed to from a tape recorder.”

Without a good record, a new trial or hearing might have to be ordered, said District Court Judge Lin Billings Vega.

“I remember a domestic relations hearing, without a court reporter, where unbeknownst to us the recorder stopped working,” she said. “We had to recreate the hearing, which regrettably delayed the case. We’re fortunate to have excellent court reporters at every felony jury trial. I shudder to think about the impact on counsel, defendants, victims and the community if we lost any part of a trial record.”

Electronic ears just can’t compare, but worries that they will are nothing new.

When Geislinger first went to a school to be a court reporter in the early 1980s, she came across an article in an old trade magazine. The author talked about the tape recorder and lamented how the new technology likely spelled replacement for him and his fellows.

“That magazine was from 1937. But we’ve actually embraced the technology instead of running away from it,” said Geislinger, who worked in the field from 1984 through 2000, before taking a break to raise her family. She returned to the courthouse in 2017, and said, at times, she felt like “Rip Van Winkle” as she grew accustomed to the new way of things.

“The (steno) machine itself is actually like a little computer. In the old days it was more like a stamp pad. You would push the key and it would push against the paper. We don’t even use paper anymore. We are the highest tech people in the courtroom,” Geislinger said. “And it’s just marvelous to go and see how it helps in so many different avenues, from courts to captioning. I have a friend in town who does (live captioning for televised) hockey games.”

Becoming a certified court reporter requires completion of an online associate degree program. Starting pay, Geislinger said, is around $60,000 in Colorado, the fourth-highest paying state for the profession. What’s written on the clock belongs to the state, but trial transcripts produced during off time — at $3 a page, for proceedings that run about 300 pages per day —  can up that salary into the six figures.

Today, the profession is largely dominated by women.

“It’s interesting, because it used to be all men, and it gradually started to change over,” said Geislinger, one of 12 court reporters, all female, in the 4th Judicial District.

She points to the story of Vivien Spitz, a Denver court reporter who, at age 22, was the only female recorder of record at the Nuremberg Trials. She went on to become the first woman to serve as official reporter of debates in the U.S. Senate. A member of the Colorado Women’s Hall of Fame, Spitz died in 2014, at age 89.

Court reporter Tracy Boulais thinks misperceptions that the field had been made obsolete, or that it only entailed courtroom work, may have turned people off.

“What they don’t realize is this career involves captioners, which we’ll always need for the hearing impaired,” she said. “There are just so many different facets. And we desperately need court reporters and captioners now. I highly encourage young people to look at this.”