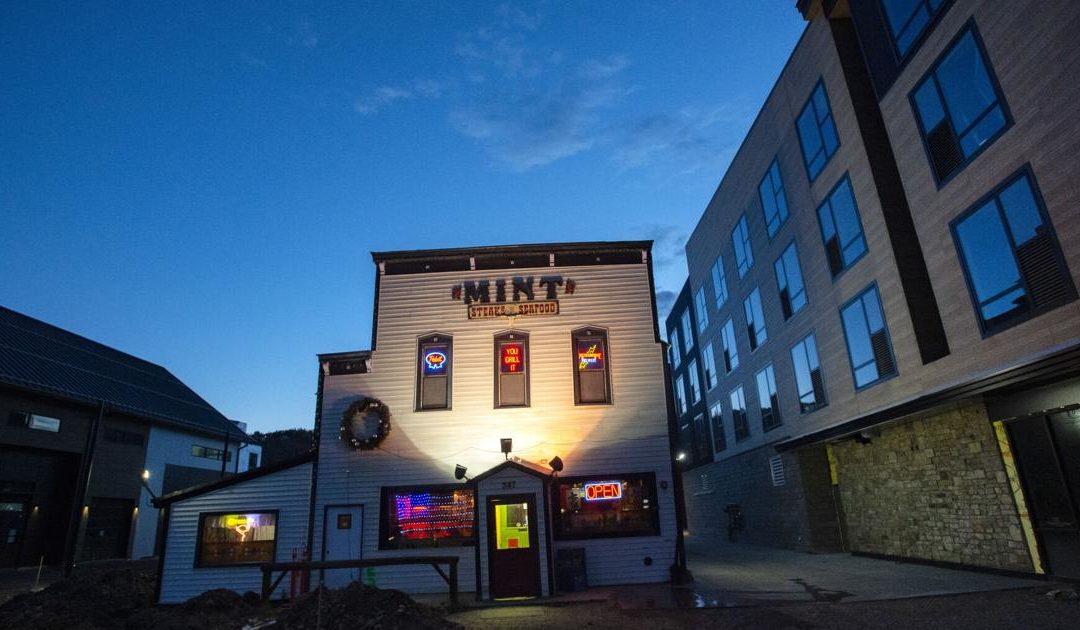 SILVERTHORNE • Once again, everything is changing around the Mint.

The drilling, banging, clanging sounds of progress fill the air, drowning out the din of heavy traffic on Blue River Parkway. One of those hip food courts is joining this thoroughfare, along with a hotel and high-rise condos. A parking garage has been added.

Squeezed between it all is a small, plain block of a building more than 150 years old.

“Is Tom here?” asks one of the construction workers. “Oh (expletive). I gotta move my truck. He gets mad.”

Yes, Tom Ricci is inside. He’s the self-described no-nonsense Italian behind the Mint’s concept since 1984: a grill-your-own steakhouse beloved by locals and skiing tourists alike.

Summit County residents belly up to the bar known for generations — the saloon predated Colorado’s statehood — while vacationers mingle around a table-sized grill. They flame-broil their choice of meat, shake their choice of seasoning, lather on butter from a bucket and follow cooking time suggestions of a posted chart. Or they follow their own practice.

“Other places, they get disappointed. Here, people don’t complain,” says worker Kyle Dandrea. “Our line is, ‘The mirror is in the bathroom for complaints or compliments to the chef.’”

Which is good, because Ricci doesn’t want to hear anymore complaints. The construction has been enough.

On this night he greets Mike Kimball, a regular since the 1970s. Ask Kimball about the area’s changes over the years, and he laughs.

But the Mint must go on.

It was formerly Jack Ryan’s Saloon, built in 1862 to serve parched miners of a camp called Kokomo. The building was later moved down to Frisco, following the railroad boom in the valley. It was transplanted again just north to what history remembers as Old Dillon.

The saloon watched passengers come by horseback, then by automobile. It saw patrons wire telephone lines and fight in two world wars. It saw them suffer during the Great Depression.

It was in those years that Denver Water started buying up property. In 1956, remaining residents were told to sell and leave. A dam would be built and Old Dillon flooded.

But the saloon was spared. It was relocated once more to its current spot in Silverthorne, incorporated in 1967.

Changes were relentless still. The 1970s saw the expansion of Interstate 70, a shopping center that is now the outlet mall and the popularization of skiing.

The slopes called to Ricci. In 1978, he found himself sipping cocktails in Telluride with a buddy from back in Illinois.

“I said, ‘Someday, I’m gonna get out of the corporate world, and I’m gonna move to Colorado,’” Ricci recalls. “And he said, ‘Have another drink.’”

Ricci made quick of that drink and quick of his promise. He stopped selling computers and opened a deli in Vail. His restauranteering soon took him down the highway to Minturn — the cook-your-own concept took off at Minturn Country Club — and then to Summit County in the other direction.

“The Realtor kept saying, ‘You don’t want to buy this place,’” Ricci says. “It was the Silverthorne knife and gun club. The police were here breaking up fights every night.”

While enamel coating was stripped from the oak bar, a woman in a cowboy hat and cowboy boots stopped by, Ricci remembers. She shared memories of her dad drinking while she went upstairs to play cards with “the girls.”

“You know, the working girls.”

Those days are long gone. Ricci’s other priority was making the Mint a family-friendly place. And so it is today, with kids joining their parents at the grill.

Zipping along Blue River Parkway recently, amid new walls rising around them, vacationers have had their eyes drawn to an old building that seems out of place. They’ve spotted a big, red sign: “MINT OPEN DURING CONSTRUCTION.”

“They wanted to buy us out, buy our property also,” Ricci says.

But the Mint must go on.

Meats and prices vary based on the market.

At last visit, steak, filet mignon and rib-eye ranged between $21.50 and $36.50. The 12- and 16-ounce New York strips are dry-aged 28 days for flavor. Teriyaki chicken, wild salmon, yellow fin tuna, beef kabobs and shrimp skewers have been other options.

Salad bar comes with purchase of protein. Bread also free, kept by the grill for toasting.