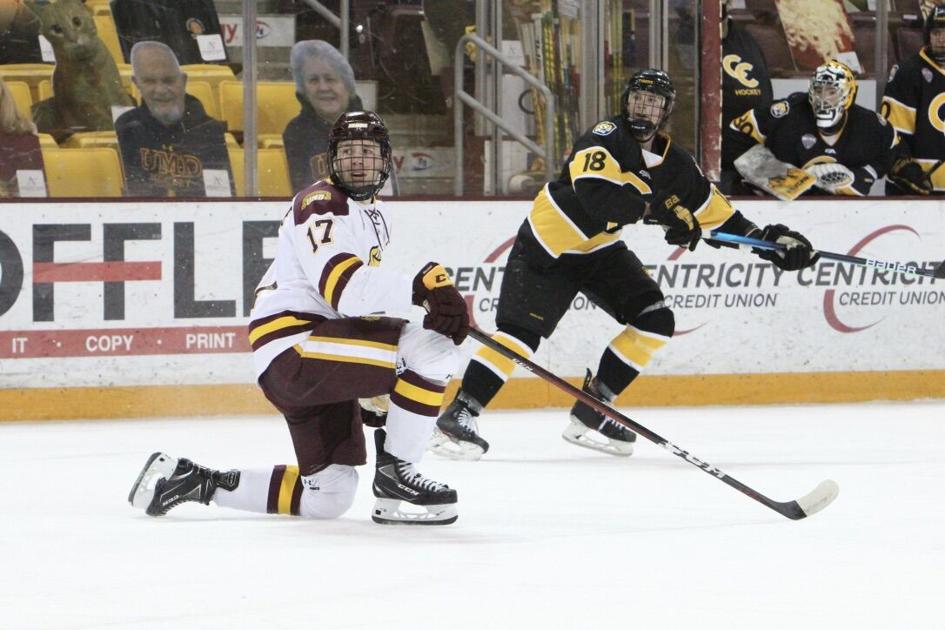 No one’s awarding bonus points for pretty wins. The Colorado College Tigers eked one out, 2-1, and they’ll take it gladly.

CC snapped a nine-game losing streak Thursday via a third-period comeback against No. 8 Minnesota Duluth, the defending national champion. Two of the Tigers’ four wins on the year have come against the Bulldogs. They swept the regular-season series.

Matthew Gleason scored the first of his career, Troy Conzo added a go-ahead goal and Dom Basse made 42 saves.

“They were dictating the play for the majority of that game, but I think we deserve some credit for sticking with it and coming up with the win,” Conzo said.

Nick Swaney beat Basse 19 seconds into the second period, but that was it. Even while outshooting CC 17-2 through one period and 29-9 through two, the Bulldogs couldn’t push the puck through one of many goalmouth scrambles. There was a helping of CC puck luck as well, as a bid went under Basse but slid wide.

The Tigers (4-13-2) continued to be horrendously outshot but came alive in the third period. Bolstered by some of Basse’s best work and an unusual call, they made a one-goal lead stick.

“You could see the confidence growing on the bench,” coach Mike Haviland said.

Gleason, who joined the team midseason from juniors, scored a huge one in his third career game. The 5-foot-8 forward took the puck over the blue line and held onto it, dripping with Bulldogs, and came all the way around the net. He was surprised to find himself open and took aim from the faceoff dot.

“It was an unreal feeling,” St. Paul, Minn. native Gleason said. “Being in my home state, playing against a lot of guys that I know. The most important part was that it was a really pivotal part of the game.

“It just felt really good to help contribute to a win for the boys.”

That ended a streak of 33 scoreless power plays. The penalty kill also had its moment, taking care of 1:42 of 5-on-3 in the first period.

With 2:29 remaining in the third period, Conzo dipped and fired a shot past Ryan Fanti for his first goal since Dec. 13 — the other win against Minnesota Duluth.

“It was a pretty ugly one,” Conzo said. “We’ve had some bad bounces recently so it was good to finally have one that went our way.”

Haviland called it freshman Basse’s best performance to date. In contention is his first career start, a 30-save effort against — that’s right — Minnesota Duluth.

The puck entered the CC net late in the game and it was reviewed. Matt Wellens of The Duluth News Tribune reported that Scott Sandelin was told officials were in the process of blowing the whistle, so the goal didn’t count.

Zach Berzolla blocked a pair of shots as the Tigers weathered a minute and a half of 6-on-5 play to seal the win.