“They want us here”: Colorado hair stylists get back to work 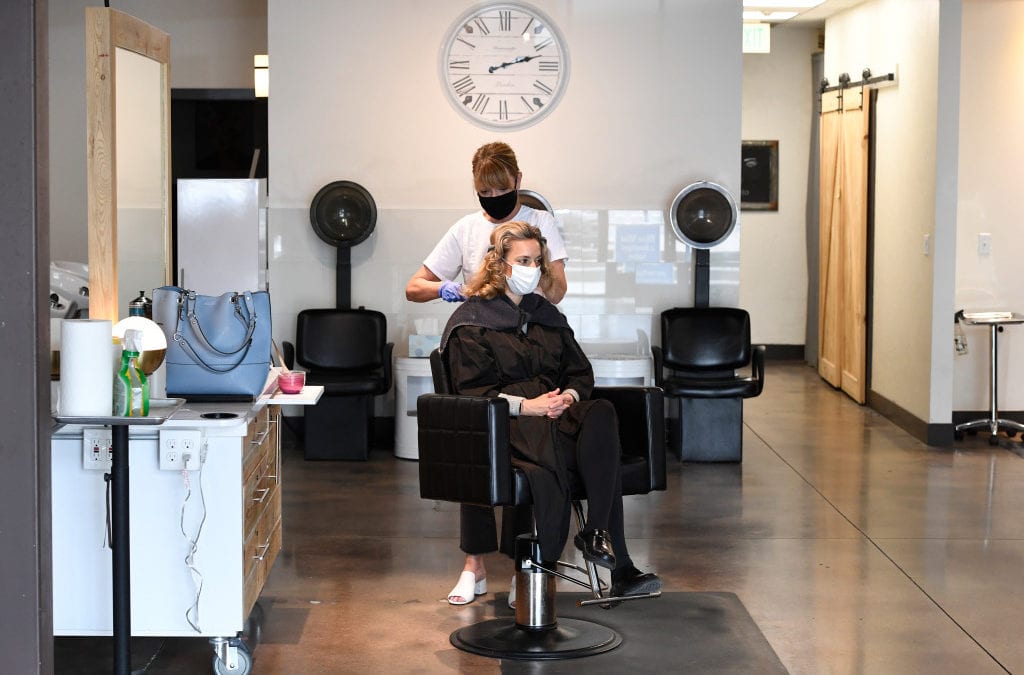 Business partners Kayleen Heil and Misty Perego had mixed feelings about reopening their hair salon, Blue Mist, on Friday — the first day they were allowed to let customers in under Colorado’s “safer at home” guidelines.

The shop, located in Lone Tree, suffered a financial hit from being closed for more than a month, and clients begged to get their hair cut and colored. But the possibility of being exposed to the coronavirus was enough to make Heil and Perego think twice.

“The thought had crossed our mind of not opening,” Perego said. “But we want to service our customers, and they want us here. That was our ultimate decision.”

After a statewide stay-at-home order shut down most Colorado businesses in March, parts of the economy are slowly flickering back to life. As of May 1, retail stores, hair salons, tattoo parlors and pet grooming services are among a handful of industries allowed to begin operations, unless a local mandate prevents them from doing so.

Denver and most of its neighbors remain under a stay-at-home order until May 8, but Douglas County — home of Blue Mist — is following the state’s “safer at home” track.

Still, it was far from a return to business as usual Friday.

Blue Mist Salon customer Erika Edwards jokes with stylist Carrie Schield, right, at the salon May 01, 2020. The salon opened back up Friday under the new safer-at-home rules and is following guidelines of a ten-person occupancy limit, safe-distancing and and strict sanitizing of all tools and facilities. Awaiting customers are asked to stay in their cars until their appointment, they have to wear masks, use hand sanitizer and have their temperatures checked.

At 10 a.m., Blue Mist began welcoming a limited number of customers — mask and temperature check required. The salon is not currently offering blowouts or lower face waxes to comply with new safety standards, and it’s running with about half as many stylists as it would normally because of restrictions that limit the salon’s capacity to 10 people. The schedule is filling up quickly.

Down the road, the Park Meadows mall remained largely closed Friday. The main entrances were locked and parking lots were vacant outside major retailers. Several stores, including Crate & Barrel, Altar’d State and EcoMountain, began offering curbside pickup this week, but management company Brookfield Properties declined to say when their storefronts might open.

One exception was Dick’s Sporting Goods, which allowed customers inside, though the two-story shop was nearly deserted. Melissa Tafoya came with her husband to purchase a bike. Though she does most of her shopping online these days, the couple wanted to compare bike models in person before deciding which to buy.

Tafoya, who is from Parker, was pleasantly surprised to see other shoppers and store staff wearing masks and maintaining social distancing guidelines. However, she doesn’t expect to go to more stores now just because they’re open.

“I am still a little hesitant,” she said, “but I do like that more (businesses) have curbside options.”

Co-owner of the Blue Mist Salon, Misty Perego, left, takes a digital temperature reading from client Melanie Spears before Spears gets her hair done at the salon May 01, 2020. The salon opened back up Friday under the new safer-at-home rules and is following guidelines of a ten-person occupancy limit, safe-distancing and and strict sanitizing of all tools and facilities.

Personal services such as hair salons and pet groomers saw the biggest immediate demand Friday as shaggy people and pets turned out for their trims.

Uyen Le’s two Beauty Bar locations in Colorado Springs are already booking three weeks out — a wait is exacerbated by the limited number of customers allowed in at a time. Typically, the salons can hold up to 30 customers, Le said, and the current limitations mean the businesses are operating at a loss.

The mask requirements also change the atmosphere of the salons, Le said: “We’re in a business that’s used to be so personal, and you’re able to sit and joke and relax. (Customers) always say we’re like therapists to them.”

Sparkle Bark in Castle Rock was also bustling Friday with five canine customers in for grooming and five in for nail clipping, according to owner Chris McCullough. She noticed that people tried to do their own coiffing of pets while Sparkle Bark was dark.

“I have seen some interesting workarounds,” she said, citing dogs that came in with oddly clipped eyebrows and other sheared zones.

Taylor Loftin, who owns three tattoo parlors in Weld County, is happy to be back in action. On Friday, he opened two of his parlors — one in LaSalle and the other in Greeley — after spending the last few days disinfecting them.

Loftin said the forced shutdown of his tattoo shops starting in mid-March did its damage, setting him back $30,000 or so. He lost eight of his 15 tattoo artists during the closure.

“The six weeks we were closed were the most profitable time of the year for us because of tax season,” he said. People like to take their tax refund and “treat themselves with beautiful body art,” Loftin said.

“We’re excited to get back to work — it’s what we do. Even doing one client a day will be a blessing.”