‘There’s nothing like it’: A historic Colorado movie theater lives on, thanks to a family’s fight for its survival 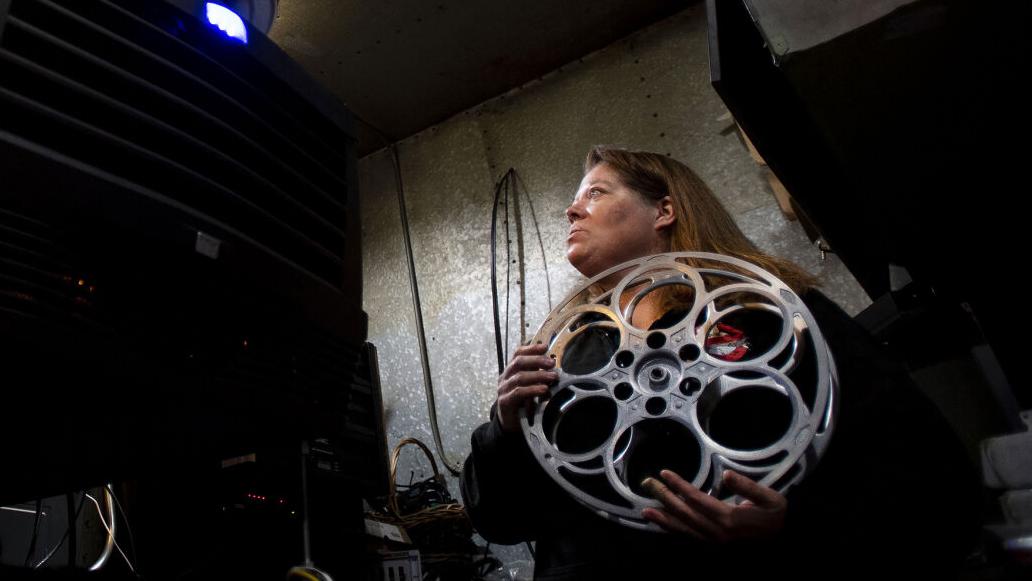 In documentaries and newspaper clippings and passed-down stories about Historic Park Theatre, the title or the photo or the punchline goes to the tower. When people walk by the theater, their eyes go to the tower.

It makes sense for the 80-foot structure to draw attention, with its colorful neon lights and an even more colorful history. It has drawn so much attention the theater often is called the Tower of Love instead of its given name.

The tower at the Historic Park Theatre in Estes Park often is called the Tower of Love and is a star attraction in the mountain town.

It’s something big to behold in this small mountain town.

But if you focus too much on the tower, you might miss the story about the century-old chairs inside the theater. They’re covered with red fabric and uncomfortable enough for the owner to purposefully opt out of showing longer movies to save customers from tooshie torture. Even for shorter movies, customers are encouraged to grab a provided cushion or blanket. When there was talk of updating the chairs, theatergoers revolted like they do about changing any piece of this historic place.

Original seats of the Historic Park Theatre in Estes Park, Colo., on Oct. 7, 2021. The Historic Park Theatre is the oldest single-house motion picture theatre in the country that was originally built as a movie theatre and is still in operation today. Jenna MacGregor and her mother Sharon Steely own and operate the theater after it was owned by Steely’s parents Mickey and Ola Stanger. (Chancey Bush / The Gazette)

Behind the ticket counter, you wouldn’t want to miss the story about a 5-year-old girl who once sat on Roy Rogers’ lap and how she grew up to own this theater. You’ll see she’s still giving out tickets in her 70s. Elsewhere, you’ll see posters from the biggest movies in history and a vintage “No smoking” sign. You’ll hear of ghost encounters and a labor of love that keeps this theater’s lights on.

On a good night, you’ll see the theater’s seats fill. Even on a night with fewer people, the theater has that special feeling visitors describe as “full of life.”

And the tower? It’s empty inside. Always has been.

The Historic Park Theatre is the oldest single-house motion picture theatre in the country that was originally built as a movie theatre and is still in operation today. Jenna MacGregor and her mother Sharon Steely own and operate the theater after it was owned by Steely’s parents Mickey and Ola Stanger. (Chancey Bush / The Gazette)

On a tour of Historic Park Theatre, co-owner Jenna MacGregor offers a spiel about this place’s claim to fame: It’s the country’s oldest single-house motion picture theater that was originally built as a movie theater and is still operating.

Each word here is important, she says. There’s an older theater in Kansas that opened in 1905, but it now has two screens. Older ones, such as Orpheum Theater in Denver, were demolished in favor of something new.

So The Park has cemented its place in history, as evidenced by a listing on the National Register of Historic Places. That move, in 1984, was a tactic to save the theater from ever being torn down.

MacGregor speaks of many things that could’ve taken down the theater. The Lawn Lake flood of 1982. Another flood in 2013. A lighting strike straight to the tower. A newer movie theater in town. The most recent threat, COVID-19, is still looming.

BELOW: The Park is listed on the National Register of Historic Places.

It’s a wonder the theater has survived decades of obstacles. But it’s not a mystery.

“It’s only still here because of my family,” said MacGregor, who owns the theater with her mother, Sharon Steely.

They are the latest in a small line of people who have kept the theater alive. Each owner has his or her own stories, some of which are lost, and others of which have evolved into their own kind of folklore.

Jenna MacGregor, co-owner of the Historic Park Theatre, points to an old photograph of the town of Estes Park inside the theater early this month. The Park is the oldest single-house motion picture theatre in the country that was originally built as a movie theater and is still in operation today.

The theater’s story begins in 1913, as the movie industry was just beginning. Around that time, there were more than 21,000 movie theaters in the country, according to Britannica.

The theater was born only a few years after the nearby Stanley Hotel made its stylish debut in 1909. Both were intended to establish Estes Park’s reputation as “a very high class and high-end touristy town,” says Sean Doherty, who has made two documentaries about Park Theatre.

“It must’ve been pretty unique and modern to have a theater in a town like this in those days,” Doherty said. “It still amazes me that it was built in the first place.”

As Doherty researched, he struggled to find a single photo of Gwynn. But he was told Gwynn always wore a suit and died in a bizarre way: He went to a sandwich shop, returned to the theater and yelled, “Oh, God, let there be rain.” He then had a fatal heart attack.

At least that’s the story people tell. And people tell stories about the tower.

Some think Gwynn built the monolith as a metaphor, but there are multiple metaphors at play.

Perhaps Gwynn built the tower after the love of his life left him at the altar. The heartbroken man wanted the tower to resemble his heart without her: empty.

Or, maybe, he wanted the tower to resemble the woman: hollow on the inside and beautiful on the outside.

Another theory? The tower was designed to look like a jukebox, as a testament to Gwynn’s innovations in sound.

“I can’t say I have an opinion either way,” Doherty says. “I guess we’ll never know for sure.”

Mickey and Ola Stanger began running theaters in Colorado in 1946 and passed on their love for the movies to their kids, including daughter Sharon Steely.

The movie biz made for a magical childhood. She never wanted to leave it.

Same with her daughter. MacGregor, 46, learned how to sell tickets before she could talk. By now, The Park feels like a member of the family and a second home.

When you’re here, you see rugs hung on the walls, an old-fashioned helper for sound quality. When the movie is about to start, the light bulbs that look like candelabras dim. You sink into a cushion on top of the red chair and sink your feet against the wooden floor, where so many others have placed their feet. It’s time to watch the screen, but you’ll catch people looking around, maybe at the piano in the corner or maybe up at the wooden beams on the ceiling. Everywhere you look, there’s a sense that you’re seeing a movie like it was meant to be seen.

That’s why each time Park Theater was in danger of closing, MacGregor’s family stepped in.

Over the past year, as the pandemic closed the theater for months at a time, MacGregor made up for lost revenue by selling a house. She and her mom leaned on their other businesses, including an outdoor beer garden in town.

“Our world revolves around the theater,” MacGregor said. “We’ll do anything for it.”

“We want the theater to be here for generations,” her mother adds. “It’s a treasure.”

You’ll see the two of them most nights at the theater, pouring butter on popcorn and smiling while they ask customers if they’ve been here before.

They know the regulars, such as Doherty, who sees a movie here once or twice a month. As a filmmaker and history buff, he says seeing movies at Park Theatre doesn’t compare with streaming at home.

“It brings back that lost art of when going to a theater was really a big deal,” he said. “Being in here, you can feel the history. You can see it and feel it.”

If you ask Seely, it also doesn’t compare with movie theaters of the modern day.

“Those 24 plexes, forget ‘em,” she said. “This is the theater experience.”

They’ve seen countless movies here, but mom and daughter still like to sneak into the back row. They can’t help but want to be part of the magic, as arms wrap around shoulders and shared laughs form a chorus. Together, they let their troubles drift away while the movie plays.

When the credits roll and people drive away, the Tower of Love will remain in sight above all the town’s shorter buildings. And then the tower will fade into the rearview.

But words from a woman in her 70s might stick in your mind.

“Have you been in a theater you like better than this?” Seely is known to ask customers, who always shake their heads.