The Water Tap: How low could Lake Powell and the Colorado River get? 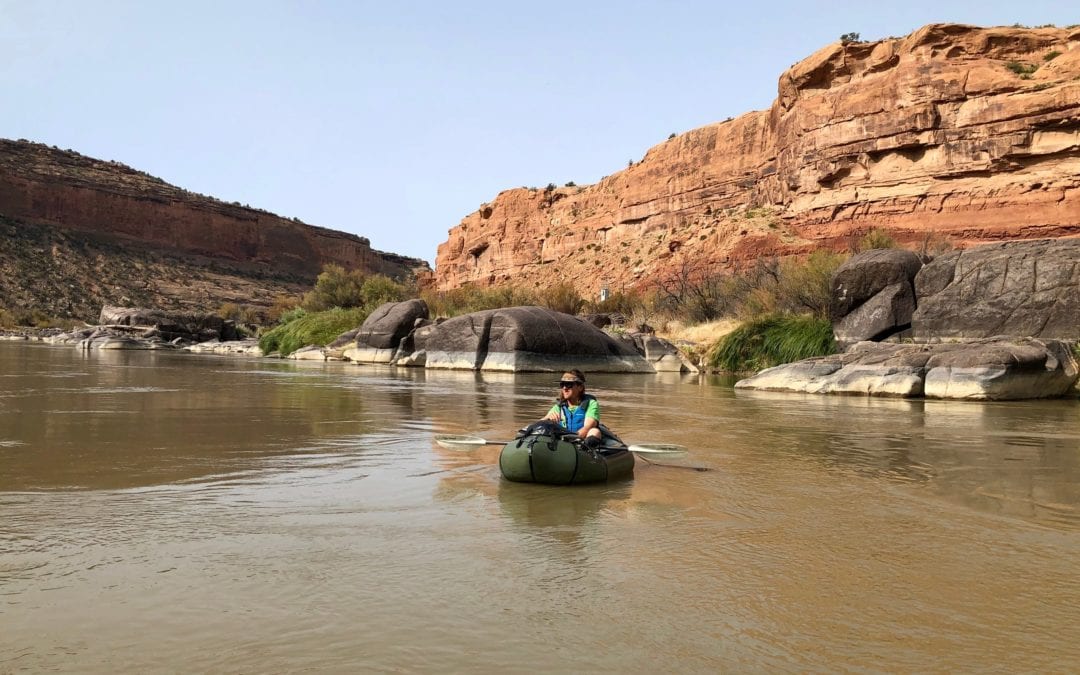 As part of this water series, each Friday (Saturday in print) we will be addressing a new topic that is relevant to water security in Iron and Washington counties. Check back each week for updates on ongoing water issues, interviews with experts, and explorations of how we can ensure a better water future for the growing communities in southwestern Utah.

I spent last weekend through the early part of this week floating with a small group of friends down a section of the Colorado River near the Utah-Colorado border toward Lake Powell. We paddled past black rocks showing an exposed white bathtub ring several feet above the current water surface, caused by calcium carbonate and other hard mineral deposits left by the water that used to flow there. At night, we docked our boats along small cliffs of earth dropping off from where the riverbank used to be. And on Tuesday, I came home to two new scientific reports that future water levels in the Colorado River may drop even more than has previously been estimated. Even more than what I just saw.

Boaters travel down the Colorado River near the Utah-Colorado border in September 2020. (Photo: Joan Meiners)

Approximately 40 million people across seven western states rely on the Colorado River for water and power generation. But increased evaporation and decreased input due to climate change, combined with rising demand from a growing population and the worst drought in recorded history — now in its 21st year — are chipping away at its flow.

Lake Powell, just south of the Utah border near Page, Arizona, and Lake Mead, east of Las Vegas, are the two largest man-made reservoirs in the U.S., and both are fed by the Colorado River. Earlier this week, Lake Powell was reported to be 102 feet below full and at only 48% capacity. Lake Mead was recorded as being 145 feet below full and at 40% capacity. Neither reservoir has been considered full since the 1980s.

Joan Meiners is an Environment Reporter for The Spectrum & Daily News through the Report for America initiative by The GroundTruth Project. Follow her on Twitter at @beecycles or email her at jmeiners@thespectrum.com. (Photo: Will Eaton)

On Tuesday, the Bureau of Reclamation released its latest report on what we might expect to happen with Colorado River levels in the next five years. These projections are produced three times per year using their Colorado River Simulation System (CRSS), a complex computer model that simulates the future flow of the river, especially in the region between Lake Powell and Lake Mead, under likely climate and management scenarios by accounting for conditions in 12 reservoirs and 29 headwater tributaries as well as the status of numerous rules dictating water withdrawals. The CRSS can be run based on the full range of historical records on drought conditions between 1906 and 2018, or by zooming in on the most recent conditions between 1988 and 2018, in what Bureau research analyst Carly Jerla called a “stress test” in Tuesday’s press conference.

Under the “stress test” assumption that the next five years are likely to be more similar to the last 30 than to the previous 100, Jerla found that the chances of a water shortage by 2025 in the Lower Colorado River Basin — which includes both Lake Powell and Lake Mead — may now be as high as 80%. This model update incorporated information not available earlier in the year, such as the recent determination that, so far this year, inflow into the river has been only 55% of the historical average.

Another report released Monday — while I was floating blissfully unaware – by the Center for Colorado River Studies at Utah State University also evaluated the likelihood of future water shortages in the Colorado River basin based on a guiding principle of “what has happened in the past might happen again in the future.” These scientists simulated possible future droughts by randomly selecting sequences of low run-off years from records drawn from three severe past droughts, two since record keeping began in 1906 plus one that lasted from 1575 to 1600 and was evaluated using streamflow evidence obtained from tree rings.

“Our paper looks at the long-term record of droughts and says, ‘this is the historical precedent for how bad it could get,’” explained Jack Schmidt, a professor of Watershed Sciences at Utah State University. “We’re not making a prediction of when it might occur, we’re just saying that these are the scenarios that need to be reviewed when one plans the future of the Colorado River.”

Their results predict a future that “might be far drier than [water] managers currently anticipate” and that likely includes “long periods when Lake Powell pool elevations would fall below that which is required to produce hydropower.”

So, what does this mean for the future of Colorado River paddling trips with friends or of, say, the Lake Powell Pipeline, Washington County’s controversial plan to bring up to 86,000 acre-feet of water per year through a 140-mile long pipeline from Lake Powell to the Sand Hollow Reservoir?

“The findings support the justification for the LPP by showing how critical it is to have a diverse water supply in times of drought,” Belnap said in an email, referring to the district’s objective that Washington County not be reliant on a single source for all its water needs. “We have already tapped out the Virgin River drainage. Even with climate uncertainty, the Colorado River is a much more robust and reliable water source.”

When asked about what would happen if falling water levels create a situation in which the LPP simply cannot function, Belnap said that, while the physical structure of the pipeline intake pumps at Lake Powell will be low enough to still be able to draw up water as lake levels continue to drop, it is possible that future water shortages in the Colorado River could force a proportional reduction in water rights that affect how much water Washington County can legally extract from Lake Powell. But he emphasized that the county won’t need the full 86,000 acre-feet for many years, adding that “there will be room to adjust as necessary.”

A boater takes in the views along the Colorado River near the Utah-Colorado border in September 2020. (Photo: Joan Meiners)

Joan Meiners is an Environment Reporter for The Spectrum & Daily News through the Report for America initiative by The GroundTruth Project. Follow her on Twitter at @beecycles or email her at jmeiners@thespectrum.com.