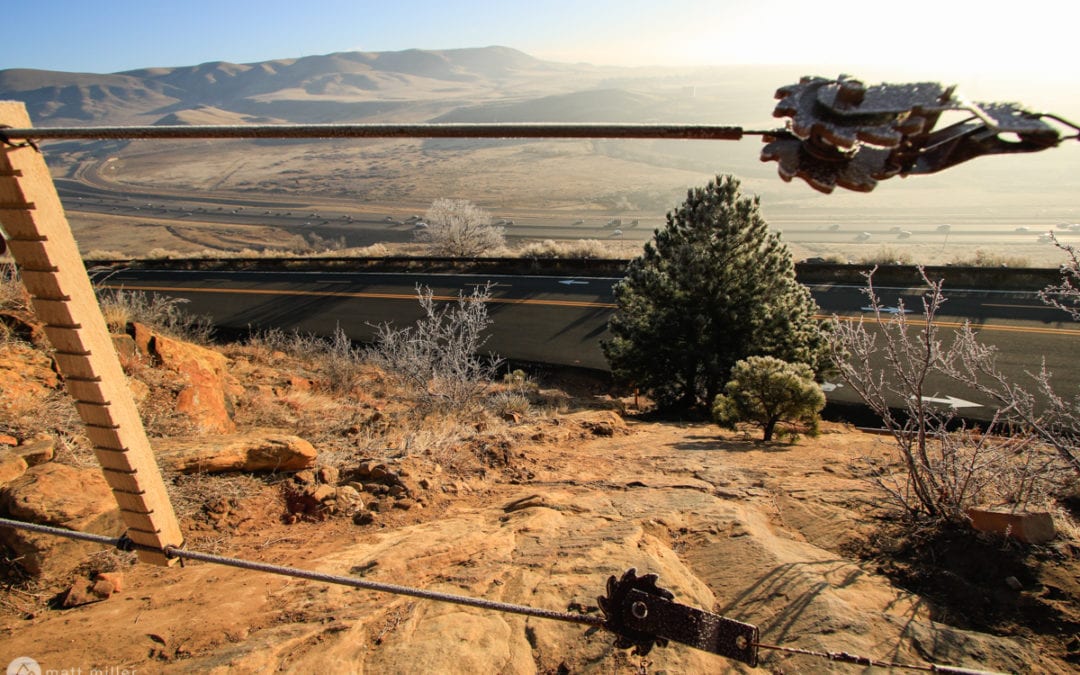 Any opinions expressed in this article belong to the author alone, and do not necessarily represent the opinions of Singletracks.com.

Someone has cut down a “safety fence” on a trail in Morrison, Colorado within a day after its construction by local land managers, Jefferson County Open Space (JCOS). The land managers erected the fence to keep mountain bikers from riding down a steep rock wall, putting their own safety and that of others at risk. Denver news channel Fox 31 KDVR first posted this news story on February 9.

Now that the lead and the skeleton of the story are up front and visible, let’s take a deeper look at some of the questions this poses and why folks are taking issue with both actions.

The Dakota Ridge trail in Morrison is either loved or hated by most local mountain bikers. The trail, about three-and-a-half miles in length is notoriously technical, with off-camber ridges and slabs, drops and small jumps, exposure, and ledge upon ledge. With riders fighting to get up and down the trail, most find themselves in a bigger, slower gear and with less speed compared to a lot of other trails in the area. Often, the most dangerous things on the trail for a mountain biker are off-leash dogs, hikers with headphones in, and tourists’ small children jumping across the trail.

Visitors and tourists can check out some of the 300 dinosaur tracks and fossilized footprints on the ridge, via the slow-moving bus tour or by foot. According to the Dinosaur Ridge non-profit, there are about 200-250,000 visitors every year who hike around the hogback. In total, Dinosaur Ridge says there are 15 fossil and geological sites on the ridge.

The world’s first Stegosaur discovery took place at the ridge. There are tracks from three distinct dinosaurs and one “crocodilian” track. They say the roadway through the ridge was built in 1937, and they discovered new layers and fossils when they cut through the hogback. It has since been designated as a National Natural Landmark.

Near the end of the first section of trail, which intersects with a road closed to all vehicles except bus tours, the singletrack switchbacks down to the road, before mountain bikers travel up and across the road to the next section of the Dakota Ridge trail. On the second-to-final switchback heading toward the road, an open wall drops from the trail down to the road. Mountain bikers brave enough to skip the trail and ride down the steep slab can do so, but not without challenges, and not with any sort of endorsement from the county. This is where and why JCOS constructed the fence.

“We absolutely identified this was a risk to anybody who may be walking or traveling up or down that hill on the roadside,” JCOS told Fox 31. According to the KDVR story, “cyclists had been cutting off the trail near the bottom, and flying into the roadway below.”

“Flying” is an exaggeration though. For mountain bikers to successfully get down this unofficial feature, they need to keep the brakes engaged, navigate a break in rock and vegetation growing in the wall, and slow down before the road. There is a big compression at the bottom of the wall – likely a drainage feature – and carrying too much speed with poor body position can easily result in going over the bars and eating asphalt.

The sight line is also wide open, so if mountain bikers were to consider riding the wall, they would have to blatantly disregard the safety of any pedestrian at the bottom of the wall and the pedestrian would have to be nearly oblivious to something happening right in front of them.

I’m not saying this can’t happen, but it seems unlikely. Given the context though, it’s safe to assume that JCOS doesn’t care about the variables which put riding this feature in a mountain biker’s favor. They care about the chance that something could happen.

On Monday, JCOS installed a 56-foot fence on the wall, with posts planted into the prehistoric rock. By Tuesday morning, the fence had been removed. Land managers are asking for any information that may lead to a suspect. On a ranger’s Twitter account, proponents of the fence-removers voiced their own opinions.

“This ‘fence,’ that is ironically drilled into the very rock it’s ‘protecting,’ is such a pathetic and predictable action by JCOS. Of all the areas to spend time and resources…”

Therein lies the debate. The fence was drilled into the rock for safety by land managers, but what is it really protecting? If the rock itself was at the forefront of the discussion, JCOS would have constructed a fence that had zero impact. If people actually being on the wall was an issue, they would have constructed a fence at the base too, like those already constructed at some of the paleontological sites, so that children aren’t running up the wall, jeopardizing anything of historical significance.

The argument for the fence then rests solely upon the safety of visitors – both mountain bikers and pedestrians in the area, but as mentioned above, it’s hard to even entertain riding the wall without knowing absolutely that you can complete it without hurting yourself or anyone else. Put another way, it’s not a feature that a rider can bail on if they change their mind, which already deters most mountain bikers, except experts from riding it. Effectively, this only shuts down access on this feature for a sliver of riders, but at what cost, and what comes next?

There are arguably several more dangerous features on Dakota Ridge alone, and throughout the entire JCOS trail network. They would be much easier to fence off, without anyone crying foul over what’s at stake for protection. Yet, this wall is singled out by land managers, and MTBers are again singled out as a user group which can’t be trusted to make their own decisions regarding safety, even though there are features just as risky as this wall throughout the entire trail, for both hikers and mountain bikers.

All of this isn’t to say that anyone should go out and start hacking away at government structures we disagree with. That would be criminal and a waste of land management resources, which are usually rather dry anyway and often prevent regular trail maintenance or the construction of new trails from happening.

So, who is in the right? Mountain biking access is granted on most multi-use trails across the nation. Mountain biking is an inherently risky sport. At what point should land managers completely disallow a user group from using parts of the trail? At what point are they protecting resources or harming them even more? Who is on the right side of the fence? As of now, a replaced version is standing again.