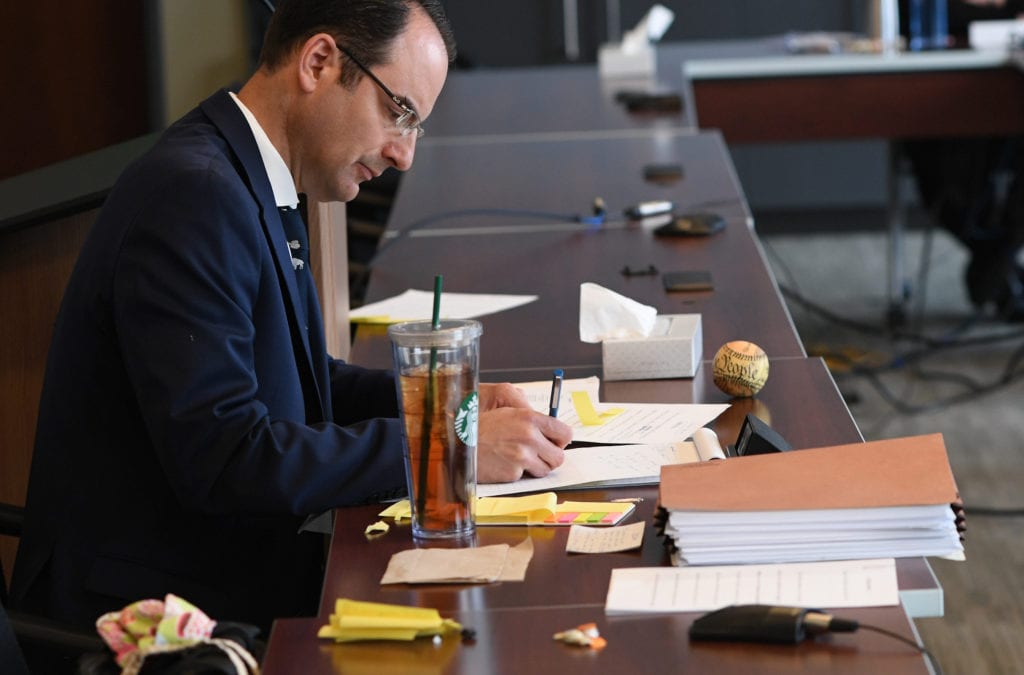 What’s The Spot? You’re reading an installment of our weekly politics newsletter. Sign up here to get it delivered straight in your inbox.

On Wednesday, the U.S. Supreme Court heard oral arguments in Colorado’s faithless electors case. A few hours later, I talked with Secretary of State Jena Griswold about it.

“I was really pleased to have the court focus so much on bribery and corruption, because that has been a major concern of mine,” said the Democrat, who is Colorado’s top election official. “We were even planning on running a piece of legislation this year about the anti-corruption of (presidential) electors.”

“Under the 10th Circuit (ruling) which we were appealing to the Supreme Court, someone could literally walk in with a bag full of money, hand the elector that bag of money, and depending on where the Supreme Court comes down, I could either remove them or potentially not have the power to remove them. But it would be unclear. I would think that is a very perverse result.”

Remarkably, it’s possible that the scenario above, in which a member of the Electoral College accepts a bag of cash, isn’t illegal in the state of Colorado. That’s according to state Sen. Jeff Bridges, a Greenwood Village Democrat who has been working with Griswold’s office to write legislation making such blatant corruption a violation of state law. With the legislative session shortened, it remains to be seen if such a bill can become law this year, Bridges says.

“I think it’s absolutely a loophole but it’s one of those things — you don’t make laws until someone starts doing something that isn’t good. We don’t think across all the human behaviors and make laws against them until we see there’s a problem and we need to make a law about it,” the senator said.

“This is not something that has ever happened or was contemplated to happen during the entire rest of the history of our state,” he added. “Otherwise we’d have a law about it.”

As Griswold noted, there was much talk about the possible corruption of electors at the Supreme Court, but supporters of faithless electors are skeptical bribery will occur. Justice Stephen Breyer repeatedly asked Attorney General Phil Weiser whether Electoral College members were bribed in the 200 years before states enacted punishments on faithless electors.

Weiser eventually told Breyer, “We don’t know of any such instances, your honor.”

Yesterday was a big one for Colorado in D.C. — SCOTUS arguments, plus a visit to the White House for Gov. Jared Polis and Sen. Cory Gardner. Alex Burness writes below on that visit, and Conrad Swanson has the latest on Ken Buck and turmoil within the GOP.

To support the important journalism we do, you can become a Denver Post subscriber here.
You can send tips, comments and questions to aburness@denverpost.com or to the other Post reporters below.

In cities around the world, restaurants are taking to the streets. They’re transforming parking lots and plazas, spilling onto sidewalks and coming up with “parklets” for more patio space. After months of closed dine-in service, these gathering places are counting on fresh air and more room for social distancing to keep employees and customers safe and businesses alive through the summer months. Denver could be next to take this step, The Post’s Josie Sexton reports.

What about Weld County?

U.S. Rep. Ken Buck, a Republican from Windsor and state GOP chair, mended fences with an El Paso County party member who had been on the warpath for about a week. But the solution to their problem apparently ignores the issue in Weld County entirely.

The troubles first began for Buck when a recording surfaced of him pressuring a state Senate district chair in El Paso County, Eli Bremer, to submit incorrect election results to the state. If Bremer had followed through, it would have been illegal, the local party official noted on the call. Ultimately the issue went to Denver District Court, which sided with Bremer.

The GOP appealed, and the Colorado Supreme Court upheld the decision. But the issue then became Bremer’s damaged reputation, court costs and more. Buck was also politically damaged in the process as the story garnered national attention. He told The Denver Post he had no idea the phone conversation was recorded and he called the move “sneaky.”

However, Buck announced Wednesday that he has ordered the creation of a new internal commission to investigate the party’s assembly nomination and ballot designation processes. The commission has Bremer’s blessing, and the press release announcing it specifically mentions the controversy in El Paso County.

It doesn’t, however, mention another R vs. R conflict in Weld County, where the county party chair, Will Sander, has alleged election fraud and corruption by four members, including one person on Buck’s congressional staff.

Meanwhile, state GOP officials did not respond when asked multiple times whether the new internal commission will investigate the Weld County case. Why look into the one case and not the other when both relate to the party’s caucus/assembly process?

Denver and other local political news

What to expect tonight

Republican Sen. Cory Gardner, reflecting on the massive field of Democrats challenging him, once jokingly referred to this year’s Senate race as “23 and Me.” But after waves of winnowing, and some eleventh-hour court cases, the Democratic field has been whittled down to John Hickenlooper and Andrew Romanoff. Those two will share a (digital) stage for the first time tonight.

“This is a forum, not a debate,” said James Scott with Indivisible NoCo, the event’s organizer.

“We’ve instructed (candidates) that we really want them to focus on speaking to the audience and not really interacting with each other. Now, to a certain degree, we’re all in uncharted territory, in terms of doing this over a Zoom webinar. Frankly, we’re going to have to see how that dynamic goes.”

A forum, not a debate. It’s a phrase you’ve heard often if you’ve followed this race. Romanoff has been frustrated with the forums and their lack of candidate interaction. He mockingly calls them “a polite exchange of talking points” and routinely criticizes Hickenlooper’s absence from them.

“Hick’s decision to turn the Senate race into a game of hide and seek is one of many reasons I don’t believe he should be the Democratic nominee, but it’s not the only reason,” Romanoff said during an interview earlier this week. “So, we’ll spend some time on Thursday night, as I’ve done at most of the other 19 debates he’s missed, pointing out where we differ on issues. It’s just been hard to debate a guy who wasn’t there.”

Hickenlooper has traditionally been a clean campaigner and has, thus far in the primary race, avoided criticizing fellow Democrats. Expect that to continue tonight, says press secretary Ammar Moussa.

“John’s going to continue to talk about his record, talk about why he is the best person to bring change to a pretty broken, dysfunctional Washington. This (coronavirus) crisis has revealed and will continue to reveal how broken and dysfunctional Washington is and there’s nobody better than the guy with a small business background, who was a mayor and a governor, to bring all of that to the table and bring change to Washington,” Moussa said.

The forum will run from 7 to roughly 8:15 p.m. Online registration is required here. Expect about a dozen questions, with two-minute answers per question. A few will come from the audience at the end and about 25% will be about the coronavirus pandemic, according to Scott.

Ads: Republicans for the Rule of Law will spend about $20,000 over the next three weeks broadcasting this ad that calls on Gardner to support expanded voting options during the pandemic. The ad has been running daily on Fox News across Colorado since Wednesday.

Service Employees International Union Local 105 is spending $50,000 to spread this digital ad calling on Gardner to help workers, not the wealthy, with coronavirus relief bills.

Endorsements: Romanoff added endorsements this week from the Denver-area branch of the American Postal Workers Union, along with several Indivisible groups.

Diane Mitsch Bush was endorsed Tuesday by the Colorado AFL-CIO. She’s a Democratic candidate in the 3rd District and will face fellow Democrat James Iacino on June 30.

Steve House was endorsed Tuesday by the American Conservative Union. He’s the Republican nominee to face Rep. Jason Crow, an Aurora Democrat, in the 6th District this November.

On Trump’s meeting with Polis and Gardner

I understood what Gov. Jared Polis meant when he told reporters earlier this week that he could not turn down an invitation from the president to meet face-to-face in Washington. Despite his policy differences with the current officeholder, Polis seems to have a reverence for the office, and saw in the invitation an opportunity to advocate directly for Colorado’s many needs — chiefly, testing capacity and protective equipment.

But, on the other hand, I wondered what would actually be achieved by flying across the country to chop it up for an hour or so with a man who has consistently disregarded and distorted facts, who has downplayed the severity of the coronavirus, and who seems to believe that our state and country are in much better shape than they are.

Clearly, I thought, this was not going to be a discussion of any nitty-gritty details of Colorado’s coronavirus response.

And I was right.

The public portion of Wednesday’s meeting began with Trump doing his thing — calling the press “fake news” and complaining about coverage, insisting without evidence that mail-in voting equals fraud and openly patronizing a government official he himself nominated.

After a bit of back-and-forth with the media, Trump and Polis had a brief exchange that I’d characterize as high-level and extremely light on specifics, with Sen. Cory Gardner jumping in now and then. Trump seemed glad to hear that many previously shuttered Colorado businesses can gradually get back to work, and that this year’s ski season may yet resume, if only for a couple weeks. He complimented the governor’s haircut.

There was laughter and a generally good vibe in the room. Trump heard what he wanted to hear: Everything’s going well, and the White House’s efforts to support individual states are appreciated.

“And you have good health care in that state, right?” Trump asked at one point during the Colorado portion of the meeting. No one took a stab at answering that complex question, and the subject was quickly changed. Like I said, high-level, light on policy details.

When the event was over, Polis spoke to the media and said he wasn’t in D.C. to pick fights, or to debate the president. He awkwardly wriggled out of a question from a reporter about whether he was impressed by Trump: “The president is the president,” Polis said, adding, three times, “He’s the president that we have.”

And Trump’s people put out a press release titled “President Trump’s Bold Actions Delivered for Colorado and will Revitalize the Centennial State’s Economy.” The release included inaccurate information about how many supplies the federal government has secured for Colorado. The governor let that slide.

Polis said in an interview from D.C. that going to the White House would be worth it if the meeting led to just one more mask or one more coronavirus test for Colorado. We know this president picks favorites, so, if the goal of the trip was to secure more supplies for our state, then Polis’s approach Wednesday — inoffensive, friendly, breezy and brief — may have been wise. Time will tell if it pays off.

Forward this newsletter to your colleagues and encourage them to subscribe.