The road to greenhouse gas cuts: Are Colorado drivers ready? 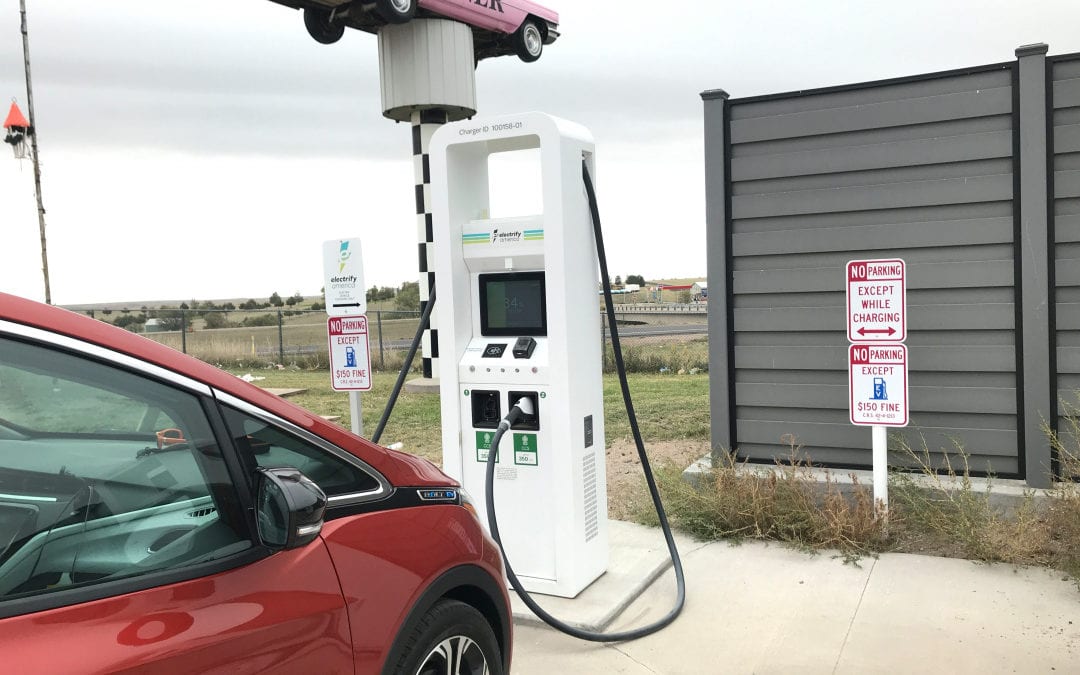 When Colorado’s greenhouse gas battle comes to her Wheat Ridge driveway, Jan Rose will be ready.

Rose believes heart and soul that if the state wants to hit benchmarks of 90% cuts to polluting emissions by 2050, Coloradans will have to drive less, and if they do drive, use a clean electric car. Recent successful trims to power plant and petroleum drilling emissions will not be enough on their own.

So Rose is sharing the pain and the gain. She installed home solar panels that run her electricity and sometimes produce extra to send out to the grid, where Xcel pays her for it. Then she set up an electric vehicle charging station so neighbors can plug in and pay her a small amount through a phone app. A bright blue sign in her yard points neighbors to a charge cord dangling from an outlet just behind her recycling bins.

“I can’t escape climate change,” said Rose, an enthusiastic outdoorswoman who has watched drought claim snowfields, and a commuter who has watched Denver’s brown cloud evolve over time. “I might as well try to do something about it.”

Drivers have reached the onramp for Colorado’s road to greenhouse gas reductions. Of the three primary contributors of emissions benchmarked in a 2005 study, electric power generators have made substantial changes by retiring dirty coal-fired plants and commissioning massive wind and solar arrays. Oil and gas drillers and distributors, a second major emissions leg, have seen federal leasing pauses and demands to cap damaging methane emissions, with more petroleum regulation on the way.

Transportation-generated emissions  — the third leg — are now the largest portion of the problem, as set out in Gov. Jared Polis’ January release of the final Greenhouse Gas Pollution Reduction Roadmap. The delayed 2021 Legislature will take up bills to combat transportation emissions, and regulatory agencies like the Air Quality Control Commission will spend parts of the next two years holding public hearings and finishing complex rules for the transportation sector.

The state’s roadmap so far in the transportation sector relies heavily on electrification of Colorado’s multi-million vehicle fleet to achieve most of the greenhouse gas savings. Electric vehicles recharge using power from either clean renewable energy, or from centralized fossil fuel plants where cleaner technology can be concentrated.

State proposals so far focus on electrifying the fleets and commuter cars at larger employers, and incentives for individuals to change over to zero-emission EVs. Environmental advocates point out, however, that Colorado dealers are currently selling only a few thousand EVs a year, and that the state’s goal of getting 940,000 of them on the road by 2030 is far too daunting. EVs made up about 2.4% of Colorado’s 178,000 car and light truck sales in the first 10 months of 2020.

Even if consumers were willing, they note, the widely supported push for equity in climate change laws means regulators must include greater help for lower-income families to acquire new or used EVs.

Besides, CoPIRG’s Danny Katz argues, simply replacing all the cars with another kind of car ignores many other problems created by U.S. transportation culture.

“We’re flooded with cars,” he said. “The bathtub is overflowing. We need to turn off the faucets and focus on giving people options.”

The state’s roadmap counts on 12.7 million metric tons of emissions cuts from the transportation sector by 2030, and 6 million of that is expected from fleet turnover to EVs and newer, cleaner-burning fossil fuel vehicles, noted Cindy Copeland, air and climate policy analyst for Boulder County Public Health. (The baseline calculation for 2005 said all Colorado sources emitted about 140 million metric tons of CO2 equivalent that year.)

“That’s not enough to meet the targets,” Copeland said. “We think it should be much more aggressive . . . and there are a whole host of other policies that we think are critical.”

Katz gives state planners credit for at least beginning to think about the bigger picture, including outlining cuts of 1% a year in “vehicle miles traveled” (VMT) for the next 10 years. That would be a shift in car culture, no matter the fuel of the car.

State officials interviewed Tuesday said that pushing the massive transportation sector in the right direction is so complex, and takes so many years, it can be hard to predict when significant, quantifiable cuts to emissions will show up. But, they added, there has been a culture shift in how agencies like the Colorado Department of Transportation broaden their focus from pouring concrete and asphalt, and that vehicles are improving faster even than state models have accounted for.

Roads are still crucial to the core of CDOT, executive director Shoshana Lew said, not only because vehicles still dominate transportation. All mass transit agencies in the state, for example, also rely on good roads to carry people.

CDOT is shifting emphasis from expanding road capacity to a “fix it first” mentality for the budget, shoring up existing roads while supporting other modes of transit from buses to trains to protected bicycle and pedestrian use, Lew said. Even where it does plan future rebuilds, such as Interstate 270 through the northern suburbs, CDOT has overhauled how it includes neighborhoods in planning and design after battling over the Central 70 project for years.

“Bustang is one of the most successful transit organizations in the state,” Lew said, referring to the state commissioning motorcoach bus routes for commuters and recreators. She said CDOT  will continue to expand frequency on popular routes, such as metro areas to ski counties. “There’s a lot of work that remains to be done in that space. It’s not an either-or in fulfilling our mission.”

Adding hundreds of thousands of zero-emissions electric vehicles each year seems like a huge stretch from the current reality, acknowledged Will Toor, director of the Colorado Energy Office under Polis. But electric vehicle sales are up worldwide by 50 to 100% a year, and giants like General Motors have announced they will sell only electrified light-duty cars and trucks by 2035. Sales growth now needs to be supported by the state and Xcel Energy investing in expanded charging stations and other infrastructure up and down the Front Range to give consumers and employers reliable fuel, he said.

“The industry has concluded this is where the world has headed,” Toor said.

Going beyond the roadmap

Some advocates and consumers, though, want more, and faster, when it comes to sweeping climate change policies in transportation. They see measurable global warming as a good reason to take on other failed legacies of car culture, whether that’s building polluting superhighways through minority and low-income neighborhoods, or land use policies that build far-flung suburbs and industry on top of wild lands.

“We continue to build infrastructure that tips the scales toward driving and creates barriers toward taking other modes,” from mass transit to bicycling to walking, Katz said. Environmentalists frequently point to the notorious “T-Rex” rebuild of Interstate 25 through central Denver as an example of doing the same old thing over and over again without learning — it was meant to widen lanes and smooth traffic, they say, but the highway just drew more drivers.

Interviews with environmental advocates and trade groups identified emissions cuts they would like lawmakers and regulators to consider more openly:

Broadening of public transit: Colorado cities need to make buses or trains cheaper, more frequent and more convenient for all users, especially essential workers and commuters who can’t afford even a subsidized new electric car, advocates said. Employers should be giving free passes, transit agencies should add comfortable buses like Bustang on busy routes, and new development must be required to incorporate transit, they said.

Expansion of ethanol use: Alternative fuel advocates say there is an existing bridge fuel getting burned in Colorado car engines every day that could be greatly expanded for cleaner air: ethanol added to gasoline, derived from corn. Colorado requires fuel to use 10% ethanol for most of the year, but engines already on the road can burn “E15” for cleaner emissions if there were more stations pumping it, said Nick Colglazier, executive director of the Colorado Corn Growers Association.

Growing corn for ethanol does consume other resources, but farmers have grown more efficient with land, fuel and water, Colglazier said. Ethanol can be an overall benefit and part of a bridge in technology, he said.

“We have a ready made solution that’s here to address some of the goals that have been laid out, and we really hope we can be ‘thrown into the mix.’“ he said.

State officials, however, lack enthusiasm for ethanol or other burned fuels, saying electrification is taking over so fast there’s little reason to promote liquid fuels. “Look at where the market is headed,” Lew said.

Parking or congestion fees: Discouraging driving and promoting alternatives can include parking fees for commuters, or, as in dense cities like London, extra fees for driving downtown. They also heavily impact lower-income drivers, and drive many consumers into a rage. Such innovations do not yet figure heavily in state emissions plans, but advocates are likely to bring them up at the Legislature and in the rulemaking sessions.

Congestion-related fees can be inequitable, and that should be a prime consideration, said Colorado State University student Corrina Farho, who has spoken up at rulemaking hearings. But employers who demand that workers come downtown or to other congested areas should be helping to create the solutions to cutting back on driving, she added.

“I am willing to do whatever it takes, if it represents the people equitably and it means my state will be happy and healthy,” she said.

Vehicle Miles Traveled tax or fee: CDOT’s Lew calls this the “third rail” of emissions debates because so many Americans react to the idea of charging them by the mile as an attack on freedom. Gasoline taxes already do this, in effect, but consumers can look for more efficient vehicles, and gas taxes don’t keep them thinking constantly about every mile driven. More likely to feature in this year’s debate are similar concepts that assign large employers an emissions “budget” that they must meet and/or start trimming, and reducing miles traveled by their fleets could be part of that.

The system needs to provide viable options, like public transit or walkable commuting, before setting tough VMT limits, Lew said. And the market changes quickly — just since COVID-19 arrived, employees have revolutionized telecommuting and skipping or combining errands, she noted.

“There’s so many actors involved. And the importance of personal choice in transportation. So you have to be careful,” Lew said.