The quest to save a dying Spanish dialect in Colorado’s San Luis Valley: “A treasure that exists nowhere else in the world” 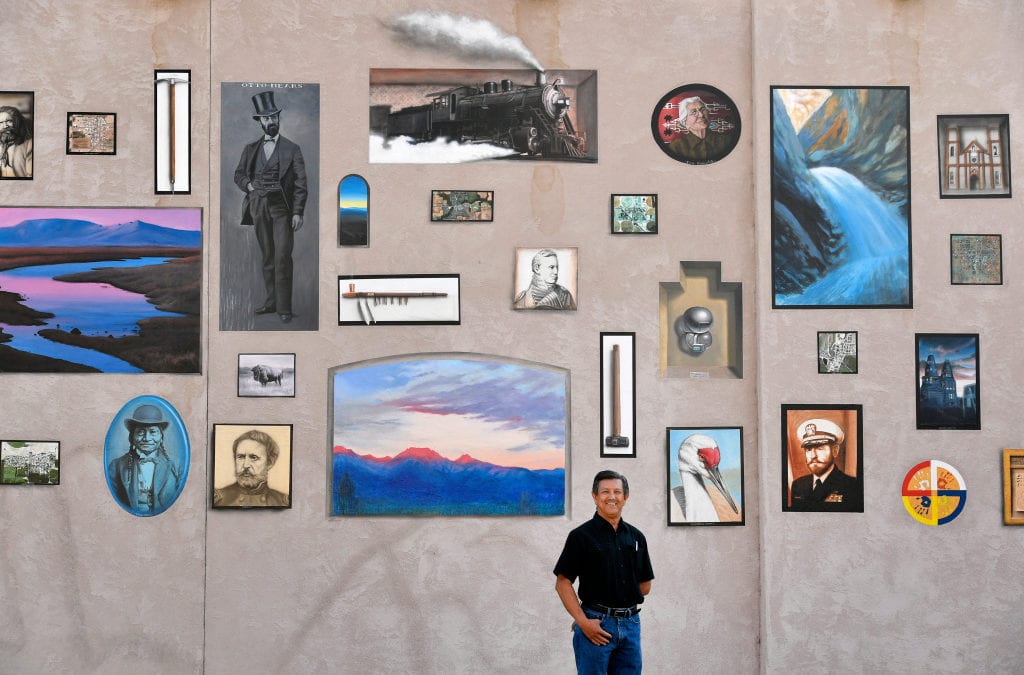 SAN LUIS VALLEY — Dennis Lopez can trace his lineage here back to 1847, when pioneers from Mexico first put down roots in the area.

He still tends to a ranch owned by his wife’s family in San Luis, a small valley community of less than 1,000 people that’s regarded as the oldest town in Colorado.

Language, however, is where Lopez finds his true passion — in particular a unique Spanish dialect native to northern New Mexico and southern Colorado. It’s a version of the archaic language found nowhere else in the Spanish-speaking world.

The former Adams State University professor’s eyes light up when he articulates the differences in this dialect, which over the years infused words from various Native American tribes, French fur trappers and American settlers into the classic Spanish brought over by early settlers into Mexico and up through the San Luis Valley.

But the language that Lopez holds so dearly, and a point of pride he cherishes about his heritage, is fading away.

Much like the dialect itself, its declining usage comes from an amalgamation of different factors: television and peer pressure, stereotyping and xenophobia. Old Catholic nuns used to whack students with rulers if they didn’t speak English.

Lopez won’t just let it go. He used to teach a class at Adams State on lifestyles of the San Luis Valley, and now gives lectures on its history and the importance of preserving their way of speaking here. But it feels like he’s preaching to the choir.

“I always end my talks by saying, ‘We have to understand and realize that we have a treasure, a treasure that exists nowhere else in the world,’” Lopez said. ‘”Speak to your children and teach them: Don’t let this jewel go to waste. Don’t let this treasure get lost.’”

History of the dialect

The “Spanish Dialect of the Upper Rio Grande Region” — a description Lopez coined —  became what it is today through a combination of necessity and isolation.

The Spaniards who made their way north to southern Colorado from what is modern-day Mexico encountered a host of items they had never seen before.

So what did they do? They used Native words, adding in Spanish inflections and tones. A few examples include “jején” for mosquito and “tecolote” for owl. Both words are adaptions from Nahuatl, spoken by neighboring Aztecs.

The Spaniards also took words from the Pueblo Indians, such as “cunque” for coffee grounds, and from French fur trappers who moved West. After English-speakers moved into the region in the 1800s, new words came into the mix: “cuques” for cookies and “tiquete” for ticket, among others.

Meanwhile, the Spanish language continued to evolve in Spain and Mexico City. But the settlers in southern Colorado and northern New Mexico were so isolated from those power centers that the Spanish stayed in its archaic form — plus its New World additions, Lopez said.

How a dialect starts to fade

Many families in the San Luis Valley can look back at previous generations to see just how the distinct dialect began to whither.

Demetrio Valdez still lives on the sprawling ranch in Antonito that his ancestors bought generations ago a few miles from the New Mexico border. Valdez, 73, is partially retired now, but he still keeps a collection of horses, cows, pigs and chickens worthy of Noah’s ark over hundreds of acres that stretch across the Conejos River. Ranching in the valley is what his family has always done.

Both Valdez’s grandfather and father spoke fluent Spanish of the local variety, but “every generation the Spanish got worse,” Valdez said.

He remembers his mother tossing their old world furniture and replacing it with Formica and plastic “because she wanted to be modern,” Valdez said. That meant the adobe chicken coop had to go as well, replaced by a metal building.

“She didn’t want to be different,” he said.

Reyes Garcia, whose family also dates back to the earliest Spanish settlers in the region, remembers driving out to California with his parents in the early 1950s. They stopped at a hotel somewhere in Arizona for the night, and his father went up to ask for a room.

The Garcias were an illustrious family, descendants of Spanish royalty. They owned hundreds of acres of land near Antonito and thousands of sheep. That meant something in the San Luis Valley.

But at that Arizona hotel, Garcia’s father only looked like a foreigner.

“We don’t have vacancy for your kind,” Garcia remembers the clerk telling his father. It was young Garcia’s first encounter with racism.

“There was a misunderstanding of who were,” Garcia said. “We had been in our homeland for 400 years.”

As a result, Garcia’s parents didn’t speak to him and his siblings in San Luis Valley Spanish. They heard the language, but they didn’t speak it, “so we wouldn’t experience the racism that was so prevalent,” Garcia said.

Education also played a major role in the language’s transformation in the region.

For a long time, schools in Conjeos County were run by nuns who didn’t speak any Spanish. Valdez recalls walking to school every day because kids were kicked off the school bus if they spoke anything but English.

Then in the classroom, the nuns would whack you with a ruler if they heard you speak Spanish, he said.

“They wanted us to forget Spanish completely,” Valdez said. “They wanted to turn us into white people.”

For younger generations in the San Luis Valley, there’s a newfound appreciation for being bilingual — even if some millennials there question whether the unique dialect spoken by their grandparents will stick around.

Growing up in San Luis, Alonzo Lobato remembers a strange thing happening when he asked his father for help on his Spanish homework.

“He’s fully bilingual, but when he helped with my homework, I would get a worse grade!” Lobato said with a laugh. “The Spanish he grew up speaking was slightly different than the Spanish they’re teaching me out of the book. So I’m learning one thing in school and learning a different thing outside of school.”

Lobato, 32, says he and his friends who grew up in the valley wish they spoke better Spanish, but it just wasn’t prioritized at home. Now he’s nagging his younger sisters to speak because he’s seen how helpful being bilingual can be for jobs in the region.

As a nurse, Lobato regularly receives patients who don’t speak English, so he’s pushed himself to get better.

But as for the unique dialect his father used on his old homework assignments?

“If you don’t use it, you lose it,” Lobato said. “It’ll slowly fade out more and more until it’ll be lost to the past.”

Justin Garoutte, whose family dates back generations in Antonito, has seen the language slowly fade throughout his own family. He likens the regional dialect’s dissipation to the forced assimilation of Native American tribes through boarding schools and systemic racism that puts American English above other languages.

“I mean, it’s sad,” Garoutte said. “But at the same time, it’s part of cultures moving forward and progressing. Things get lost that aren’t valued or useful anymore. I don’t know there is enough of a cohesive cultural group to keep this Spanish alive.”

Fighting to keep it alive

For longtime San Luis Valley residents, the future of their distinct dialect is up in the air. But there are still those fighting to keep it alive.

As a child growing up in the tiny valley town of Capulin, Julie Chacon recalled living in two worlds. She knew it was disrespectful to speak to her grandparents in English. But then at school, she couldn’t speak in Spanish.

“I feel it dying away within me now because my grandparents are gone,” Chacon said.

But when Chacon became the executive director of the Sangre de Cristo National Heritage Area in Alamosa, she made it a mission to remind people about the uniqueness of their region. Chacon spearheaded a restoration of oral histories that were done in the 1970s and ’80s, in which people such as Dennis Lopez and Valdez, the rancher, speak about the rich history and culture in the San Luis Valley.

The heritage center is also making workbooks that teach the local Spanish and organizing heritage camps that would take kids to older farms in the area.

“Our goal as a heritage area is to let the local youth be prideful of their history, their language, because it is very unique,” Chacon said. “It’s not really the history you see in the textbook.”

As Lopez, the former Adams State professor, continues to harp on the importance of keeping their linguistic rarity alive, he struggles within his own family to do the same.

“My children in their 30s — they don’t speak it,” Lopez said. “Even though my wife and I encourage it. For them, it’s a dying language.”

He expressed frustration that society, in his mind, doesn’t value Spanish-speakers. Even when Lopez speaks with Spanish-speakers from Mexico or Central America, they often tell him he’s speaking incorrectly. His workplace, an Alamosa health center, switched over their documents to the more academic Spanish to appease those who pushed for it, he said.

But despite an uphill battle, Lopez will continue giving his talks and working with the heritage center to promote the language that he holds so dearly.

“I’ve given it the old college try,” he said. “I’ve made every attempt to promote our language. I, by myself, can’t do it alone, so all I can do is present my work and hope other people pick up on it.”