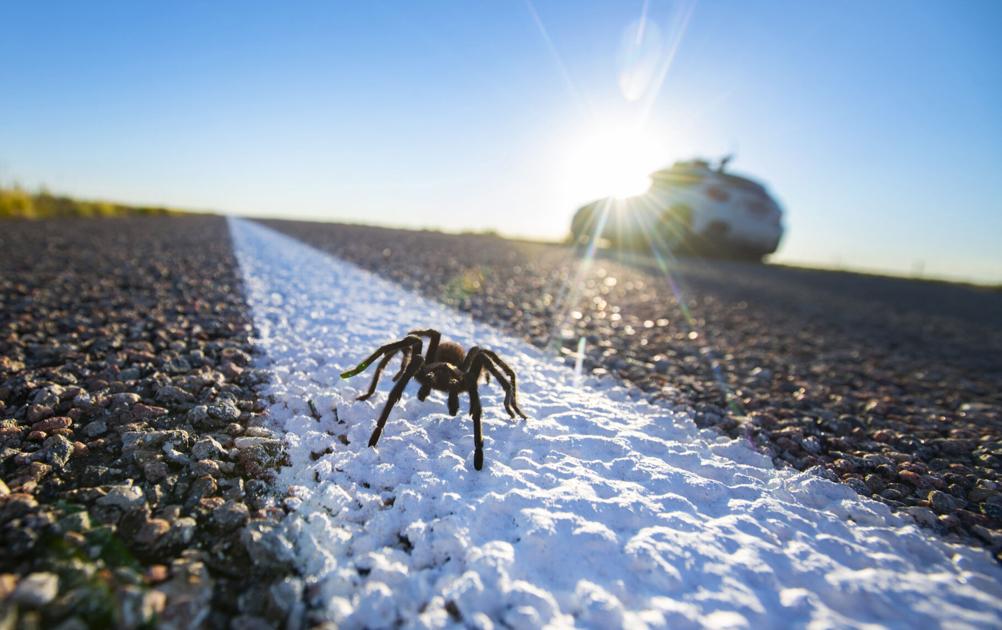 LA JUNTA • We have been driving for hours on roads to nowhere, nothing but flat land and sky all around, when finally I glimpse those hairy, spindly legs.

“There!” I shout, causing Gazette photographer Christian Murdock to slam the brakes and lurch to the side of the road.

We had to be quick. That tarantula was getting away.

Alas, it was gone, lost somewhere in the thickets of Comanche National Grassland. And so our search continued.

If you’ve seen headlines about “thousands of tarantulas” or “waves of tarantulas” marching across southeast Colorado every fall — CNN and USA Today have covered the annual phenomenon in recent years — you might have the wrong idea. On the contrary, you might see one or two or three at a time crawl across this prairie. Or, you might see none.

I’m beginning to think that is our fate. Other drivers from afar seem to be thinking the same thing.

“Seen any spiders?” one asks from Denver.

“You guys looking for tarantulas?” asks another from Colorado Springs.

She’s driving one of two SUVs in a caravan of searchers. I envy those extra eyes. Mine are sore, along with my craned neck, from forever scanning the road in vain.

Clumps of dirt, spots of tar, a glove, a shoe, a dead squirrel, smashed cacti and grasshoppers of biblical proportions all deceive. I eventually learn to ignore those lubbers for how they glimmer in the sun. The furry arachnids of interest do no such thing.

On and on and on through the fields, and I am wondering about this interest, why I am so eager to find these creepy crawlers. And why is everyone else? Drivers form the true waves here.

If you’re asking, Denahy’s answer is yes, now is your best chance to spot the tarantulas. You’ve probably heard of this fall “migration.” The common description again gives the wrong idea.

The tarantulas are not exactly coming and going. They live around here. They’ve always lived around here, since and likely long before the Dust Bowl banished farmers and led to the 1960 establishment of the national grassland — prairie to be left undisturbed.

“You generally won’t find (tarantulas) where people have plowed,” says Whitney Cranshaw, who spent 37 years teaching entomology at Colorado State University and has annually ventured here to witness the eight-legged phenomenon. “They have permanent burrows, and they live for a long time. So it has to be an area that hasn’t been destroyed. It has to be relatively intact, native prairie.”

The tarantulas roam across Comanche’s 443,000-plus acres not so much migrating, but rather looking for love.

They are lonely bachelors, probably around the age of 8, near the end of their lives. That’s when males are believed to go looking for females, who might live 15 years longer, content in their dens.

So it is all males we see crossing the road, brave males testing their luck first against traffic. They test again at a burrow, typically around sundown. How many more nights they have to stand is uncertain; they’re known to perish soon after mating.

And here we are to greet them along their promiscuous ways.

“I think a lot of it is just that scary factor,” offered Sue Keefer, a local wildlife photographer. “I guess it’s kind of like horror movies. You don’t really wanna watch, but you do.”

Keefer knows tarantulas to be misunderstood. As does Cranshaw.

“Gentle giants,” he calls them.

Sure, they bite, but it feels like a paper cut, Cranshaw says. Sure, they are venomous, but the professor says they pose no serious threat to the human body. Though, when they shag hair in defense, Cranshaw says it can feel like poison ivy. Let that dissuade you from picking them up.

But some can’t resist the dare. La Junta’s tarantulas have become irresistible indeed — mostly due to media attention and word of mouth, observers say. The town has been careful about marketing, says Denahy, the tourism director.

“It’s been interesting figuring out how to promote this,” she says. “Spiders and snakes seem to be what a lot of people are afraid of, you know. We realize spiders are not for everyone.”

Another misconception she’s gotten from all of those inquisitive callers: “People visualize the entire town just crawling with spiders.”

Sure, locals have stories. Ask Elaine Burrows, the waitress who looks around the dining room before quietly sharing, as if not to spoil appetites.

“I used to live with three dogs,” she starts. “One day, I look out my kitchen window to my backyard. I said, ‘Damn, you laid a big poop!’ Then it started moving.”

But tarantulas prefer that desolate prairie, not backyards; they’re looking for mates, not people and dogs, remember. Burrows has gotten used to telling customers where to go, which roads to try. The tarantulas bring business aplenty.

And yet the area’s identity is much more.

As far as the tarantula attention, “heck, I’m all for it if it gets more people out exploring that part of the state,” Cranshaw says. “I mean, everybody goes to the damn mountains!”

All while these curiosities are overlooked.

There is, for example, Bent’s Old Fort National Historic Site, marked by a trading post commemorating shared space by Native tribes, trappers and travelers along the Santa Fe Trail. There is Picket Wire Canyonlands, a rugged domain that surprises below the plain. Tours lead to the largest known dinosaur track site in North America.

On our drive, we were surprised by another rocky cavity splitting the prairie, Vogel Canyon, where tribes left their marks in stone. Nearby were clear ruts said to remain from 1870s stagecoaches.

Driving south on Colorado 109, when we finally trained our gaze up from the road, we noticed the landscape transform. High bluffs rose from previously flat earth. Elsewhere, we came by the ruins of a ranch where Charles Carson lived, son of legendary frontiersman Kit Carson.

I thought about something Keefer said: “You never know what you’re gonna find out here.”

We found tarantulas eventually. They crossed the road one after another. It was right at dusk, their preferred hour.

Satisfied and with daylight to spare, we drove on for whatever else lay ahead.