The mastermind behind the Colorado Rapids’ set-piece brilliance 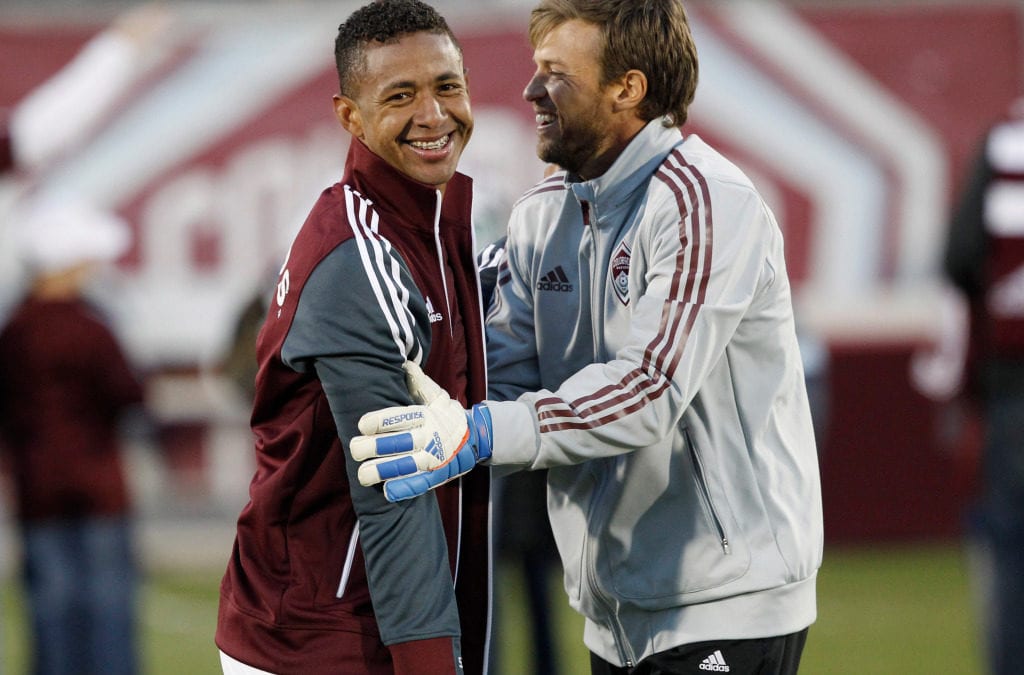 Two years of set-piece dominance has led the Colorado Rapids to their first postseason appearance in four years.

And it all starts with assistant coach and goaltending guru Chris Sharpe — an eight-year member of the Colorado coaching staff who’s always on the lookout for the next great set-piece design.

“I’ve never seen anyone spend that much time or be that meticulous in set-piece preparation and planning,” Rapids coach Robin Fraser said.

Of course, the Rapids’ set-piece success requires more than a DVR and a notebook. Fraser devotes roughly an hour of practice time each week to working on those dead-ball plays — time Sharpe uses to diagram and direct players on how to take advantage of dangerous scoring opportunities.

Ask for specifics, and the native Australian gets tight lipped, but Sharpe isn’t shy about sharing what he thinks are the key ingredients for Colorado.

“Making the right runs, bravery and (midfielder) Jack Price continually putting the balls in areas that we want them to be in,” he said.

Soccer is full of fluidity, but set pieces are those rare moments when a play can be called and executed — be it on a corner kick, cross off a free kick or direct shot off a free kick. The ability to organize can greatly increase a team’s chances of scoring.

The Rapids haven’t necessarily earned more set pieces than other teams in MLS, so this isn’t about volume. Their possession numbers have yo-yoed from near the bottom of the league in 2019 to close to the top in 2020. Colorado also sits near the bottom of the league in fouls drawn the past two seasons. But, nobody in MLS has more goals off restarts than the Rapids, who’ve had 28 set-piece goals the past two seasons.

Sharpe admits it almost always comes down to service. The Rapids have a terrific taker in Captain Jack. He’s notched 16 assists in 39 games over the past two seasons, with most of those coming from his set-piece services.

In their upset of the Seattle Sounders on Nov. 1, the Rapids scored two goals off set plays. Only one was counted as an assist for Price, but each displayed how Colorado has succeeded in scoring off restarts.

The first and eventual game-winner was scored by Keegan Rosenberry off a Price corner kick. Five Rapids were arranged in a straight line toward the goal in the center of the box. As Price swung his leg the group scattered, creating chaos that Cole Bassett nearly took advantage of, but a Sounders defender headed the ball away from goal. The deflection found Rosenberry about 20 yards out. All he had to do was take a step towards the landing spot and hammer it home.

While that goal may have been right place, right time, the next score minutes later was an illustration of artful precision.

Price lined up 28 yards off the goalline and even with the left edge of the box. Five Rapids attackers created a cross shape, three lined up parallel to the edge of the box where the defensive line was while Bassett started offsides ahead of the play. Andre Shinyashiki mirrored Bassett behind the trio.

The play was in motion before Price struck the ball. Diego Rubio’s run attracted the defense, allowing Bassett enough space to find Price’s cross and head it into the far corner of the net.

“I gotta give credit to Chris Sharpe on that one because he yelled to me and said ‘start offsides,’” Bassett explained. “I actually wasn’t supposed to start offsides. My role was supposed to go near post but he said start offsides and drift back post or towards the middle area. It worked out to a tee. They didn’t know how to stay with me once I was offside so I hopped back in the line and Price puts it in a perfect spot.”

In addition to Price’s soft touch, Colorado has also has the players to finish these plays off.

Kei Kamara factored in big until a late-season trade sent him to Minnesota. Kamara, known as the “Headmaster” for his ability to volley in goals, is top five in scores all-time in MLS history. But the Rapids haven’t slowed with him out of the picture. The youngster Bassett has shown a ton of panache, while forwards Rubio and Shinyashiki often flash the bravery that the coaching staff praises.

“We work diligently on this stuff,” Sharpe said. “… There’s no right or wrong way to do it. For us, it’s just looking at little ways we can find gaps and spaces and taking advantage of that.”