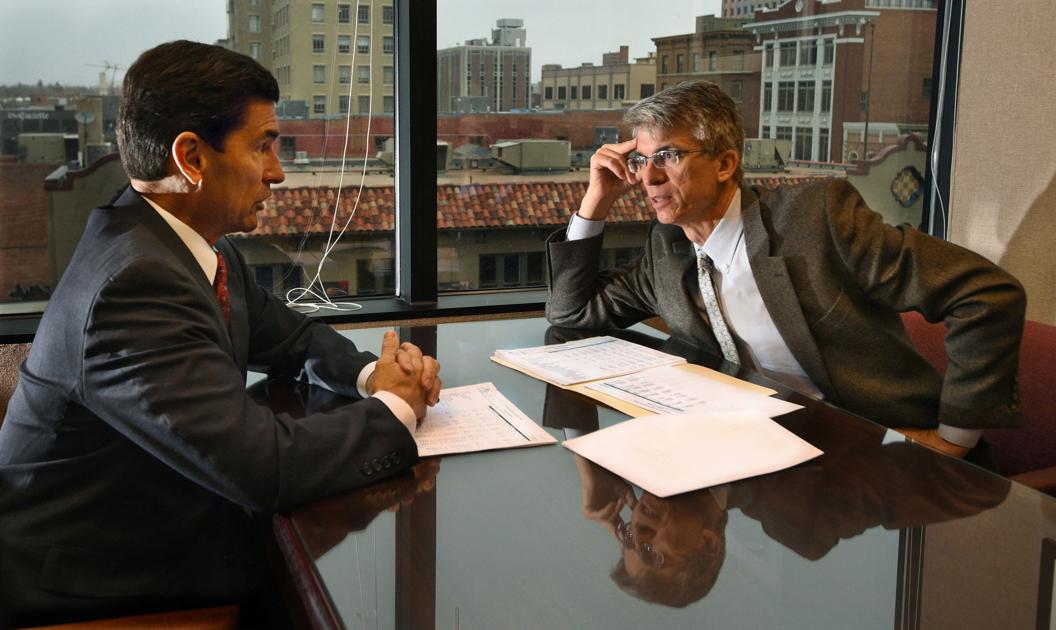 Many of us have forgotten the dark days before Dirk Draper took the helm at the Colorado Springs chamber.

And I mean dark days literally.

Faced with an economic downturn during the Great Recession a decade ago, the city switched off a third of its 24,512 streetlights to save money on electricity. The Springs then made national news by auctioning off its police helicopters, cutting its police force, and stopping the collection of trash in its parks because of budget cuts.

The Springs was a disgruntled, down-on-its luck place back then.

The city just opened a brand new downtown stadium as part of the City of Champions initiative meant to breathe life back into the city. It also recently opened the United States Olympic and Paralympic Museum downtown, the Hybl Sports Medicine Center, and will open a new Colorado College hockey arena this fall and a new Air Force Academy Visitor’s Center next year as part of the same campaign.

The Colorado Springs economy has added thousands of jobs over the last several years and the local housing market was recently rated as one of the tops in the nation. The Springs was recently named by U.S. News & World Report one of the country’s most desirable places to live.

Dozens of new apartment buildings and hotels are being built downtown; online giant Amazon will soon open a nearly 4 million-square-foot distribution center near the airport; and Southwest Airlines resumed service in the Springs in March.

Draper has been Chamber & EDC president and CEO during all of these renaissance years.

Our mayor thinks not.

“Under Dirk’s leadership, the Chamber and EDC has been a catalytic force for the positive economic growth Colorado Springs has enjoyed over the past six years,” said Mayor John Suthers. “It’s through the close working relationship between the City and the EDC that we have created a very healthy job market with excellent career prospects, especially for our young residents. We’ve attracted new businesses and helped existing businesses to grow.”

The Gazette’s publisher, Chris Reen, who is also the president and CEO of Clarity Media Group, seconds that notion.

“It’s not a coincidence that the accelerated growth of our local and regional economies coincides with Dirk Draper’s tenure at the Chamber,” said Reen. “He’s been a tireless supporter of local businesses and our military community — leading the charge to create an appropriate climate with supportive government policies.”

Can one person really make that much of a difference?

The nonprofit Chamber & EDC is arguably Colorado Springs’ leading business voice, according to our longtime business reporter Rich Laden, and Draper is the leading voice of that leading voice.

Draper himself, who announced his retirement last week, says it has been a privilege to be part of the renaissance, but will tell you the revival has been a team effort.

The Chamber team has worked tirelessly under Draper’s tutelage to attract new employers to town such as Amazon, Formstack, In-N-Out Burger, InvestorTools and Trisco Foods, and encourage existing ones to expand, such as Ent Credit Union, Jaxon Engineering and Swire Coca-Cola.

Having worked with Draper on town halls and while covering various city campaigns he has initiated, I think the secret of his success is twofold: relationship-building, and a zealous interest in the Springs itself.

When he took office, Draper put an emphasis on rebuilding relationships between the chamber, the city government, businesses, and even with us at The Gazette. Draper is a strong believer, as was Teddy Roosevelt, that putting faith in specific people is the key to success, rather than putting faith in elaborate structures, plans or even organizations.

Draper is “driven by facts and figures, is very thorough and makes sure everyone has a chance to voice their opinions,” said longtime community activist Dave Munger, who served on a committee with Draper that won the extension of a tax for regional transportation projects in 2012. “It speaks to his leadership style and shows that he wants to make sure the best possible decision is being made.”

Second, Draper always put the emphasis on the “local,” and understood Colorado Springs and what it needed intuitively.

“I have had a local focus during my entire career,” Draper told our reporter Wayne Heilman in 2015. “I prefer to keep my focus local, and this (position) is a chance to refocus on a very local level.”

Draper has been in Colorado Springs for two decades. During his 13 years with engineering firm CH2M Hill, Draper came to know the city’s issues intimately working on Interstate 25 expansion projects, construction of the Austin Bluffs Parkway-Union Boulevard interchange and the Colorado Springs Airport business park.

In other words, he knew Colorado Springs inside and out when he took the job.

Draper’s collaborative spirit helped see Colorado Springs through the pandemic with less economic fallout than almost anywhere else in the state. In the last year, the Chamber & EDC developed the Regional Recovery Council, with the El Paso County Public Health Department, to deal with the business impact of the pandemic, convene community partners and help guide community’s policies in response.

“Our ability to work quickly and nimbly with public health in pulling together the Regional Recovery Council, to respond to that, we were in weekly meetings after the first case was diagnosed in the community,” Draper said. “By early April, we were meeting on a weekly basis.”

Any revival like the one Colorado Springs has enjoyed recently takes a cast of thousands, but it also needs a very good Pied Piper to march us all toward the horizon in lockstep.

So thanks, Dick, for helping turn the lights back on in Colorado Springs. They are glowing brighter than ever right now.