‘The light at the end of the tunnel’: 1st Colorado COVID vaccine given at Fort Collins hospital 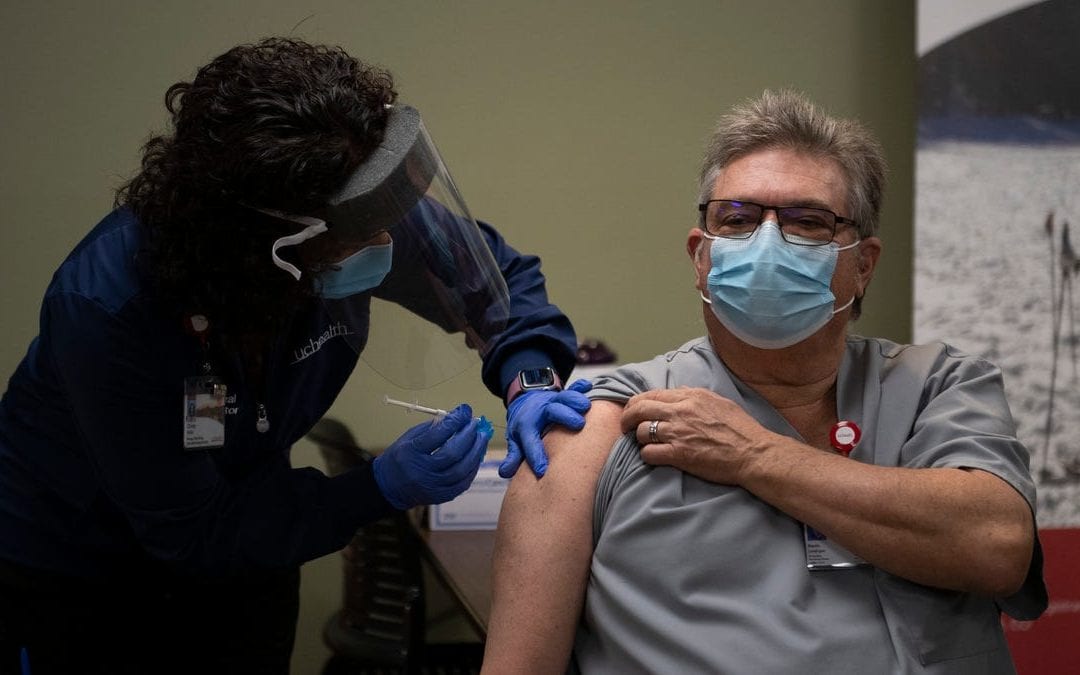 ‘The light at the end of the tunnel’: 1st Colorado COVID vaccine given at Fort Collins hospital

In 2000, Kevin Londrigan walked into UCHealth Poudre Valley Hospital to start his job as a respiratory therapist.

Reporters and hospital staff gathered around Londrigan in the hospital’s basement as the 64-year-old sat down — flanked by his vaccinator Christy Ruffell and Colorado Gov. Jared Polis — to receive the vaccine around 2 p.m. Monday.

Camera shutters clicked as Londrigan pushed up the right sleeve of his scrub top and Ruffell wiped his arm then nimbly stuck him with the syringe in her hand. The crowd whooped and Polis followed, cheering on what could possibly have been one of the most awaited — and star-studded — vaccine distributions in modern Colorado history.

Londrigan was the first of 20 UCHealth employees at Poudre Valley Hospital to be given the vaccine starting Monday afternoon. Another 30 vaccine doses were distributed in tandem at UCHealth Memorial Hospital in Colorado Springs, according to UCHealth spokesperson Kelly Tracer.

“I don’t care whether I was first, second, tenth,” Londrigan added later as he rested in a nearby, cordoned-off area. “It just feels good to (get the vaccine) and help protect my family, my coworkers, the people out in the community.”

As per Pfizer’s requirements for their vaccine, recipients of it, like Londrigan, will get a second dose 21 days later.

The Fort Collins hospital received a shipment of 3,900 doses of the vaccine early Monday morning — just a slice of the 46,800 doses Polis said the state was expecting as part of its first allocation of the vaccine. Another 230 of the state’s initial Pfizer doses were expected to go to McKee Medical Center and 500 were expected to go to UCHealth Medical Center of the Rockies, according to an earlier report in the Coloradoan.

Roughly 6,000 doses of the Moderna vaccine are slated to go to Larimer County health care facilities once it gets FDA approval. Larmier County had 109 COVID-19 patients in its hospitals as of Friday, according to county health department data.

While Londrigan noted that his daily life will stay the same with regular mask wearing, social distancing and hand washing, he called getting his first dose of the vaccine a “light at the end of the tunnel” — one that’s finally come after months as a front-line health care worker during the COVID-19 pandemic.

Since the onset of COVID-19 in Colorado, Londrigan said his work as a respiratory therapist has brought him in contact with COVID-19 patients during roughly 95% of his shifts at UCHealth Medical Center of the Rockies, where he moved to in 2007 after starting with the health care system seven years prior.

It’s not uncommon, Londrigan said, for him to spend ten hours of a 12-hour shift in the hospital rooms of COVID-19 patients.

“We get the worst of worst. We get COVID patients transferred to us from all over the (three-state region),” Londrigan said. “I believe we’re the best of the best, and that’s why they send them to us.”

All of the doses delivered to UCHealth Poudre Valley Hospital on Monday will be given to UCHealth staff, according to Tracer.

COVID-19 in Colorado: COVID-19 vaccine arrives in state, bringing hope for the future

Daphne Dubach, a registered nurse who works on the hospital’s medical surgical unit, was third in line for the vaccine Monday. Then there was Dr. Diana Breyer, the first Colorado physician to receive the vaccine.

One by one, doctors, nurses, and hospital staff lined up to get their dose. As the afternoon wore on, the spurts of applause that greeted the first handful of vaccine recipients slowed.

By the time Dr. Jennifer Markus, an anesthesiologist at UCHealth Poudre Valley Hospital, sat down for her vaccine, the room just had a sprinkling of people.

Decked out in green scrubs, a colorful scrub cap and N95 mask, Markus got the shot and let out a tiny “woo” in celebration. Earlier in the day, Markus said she had to intubate one of the hospital’s COVID-19 patients.

“It’s been tough, it’s been tough for everybody,” Markus said of the pandemic, adding that a lot of days are marked with worry, “for our people, for our patients, for each other.”

But earlier today, before she came down to get her vaccine, Markus said the mood had shifted.

“It’s pretty exciting … even just feeling the energy upstairs when they knew some of us were going to get this today,” she said. “It’s been a nice, bright, shining moment.”

Erin Udell reports on news, culture, history and more for the Coloradoan. Contact her at ErinUdell@coloradoan.com. The only way she can keep doing what she does is with your support. If you subscribe, thank you. If not, sign up for a digital subscription to the Coloradoan today.