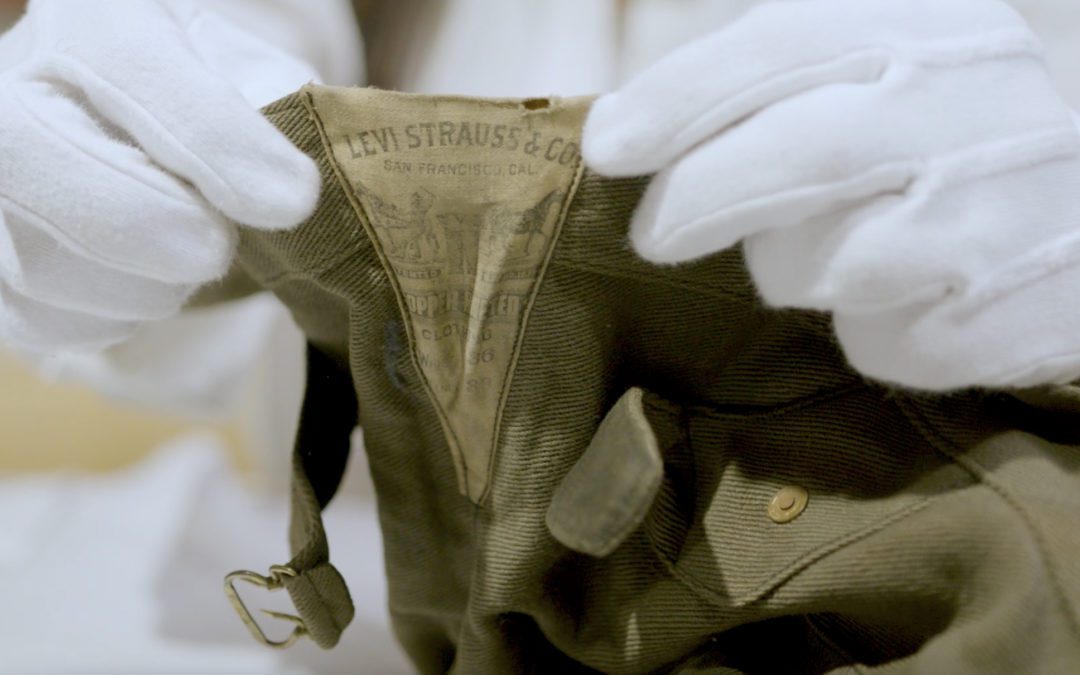 At 10,000 feet above sea level, near the highest summit of the Rocky Mountains, the mining town of Leadville, Colorado, was founded in the late 1870s.

Leadville’s striking scenery and historic mining structures, like a massive wooden headframe that is still standing today, make it the perfect place for a Levi’s® discovery. Here, just a few short blocks from the legendary 1879 saloon where lawman Doc Holliday drank with locals, a homeowner found our latest Archives addition — a pair of 19th century value jeans. Meet the Leadville Levi’s®.

Life in Levi’s® in Leadville

While the town was known back then for its mining, the Leadville Levi’s® were not found in a mine like other similar discoveries from this time period. “They came from an old home in Leadville with a shack in the back,” said the seller. “Someone must have lived there [in the shack] in the 1880s since that was the strike era.” The home and shed where the Levi’s® were discovered is a short walk from Leadville’s famous Tabor Opera House and other 1800s buildings. It is listed on the National Register of Historic Places near the city’s historic Millionaire’s Row.

“They were preserved in fantastic shape,” said the Leadville homeowner who was renovating the home and shed behind the property in 2015. “The buttons were shiny, and I didn’t think they were very old, maybe from the 1970s because of the buttons and the sewing around the hem.”

As the story goes, Samuel G. Haas (no relation to the Haas family affiliated with LS&Co. today), a  Leadvilleite who worked as an electrician for the Leadville Electric Light Company, purchased the Victorian-style home in 1888. Haas later sold it to the Brennan family in the early 1890s.

Lawrence Brennan, the father, was born in 1856 and is listed as a miner on the 1900 census. Yet the description of his tombstone in the Leadville Cemetery, “Here Rests a Woodman of the World,” suggests he may have been a lumberjack for one of the mining companies.

Lawrence and his wife, Mary, had a son named William, who was listed as a plumber on the census and identified as living in a back shelter of the home, probably the shed. Although the family rented rooms to boarders until Lawrence passed away in 1906, the Leadville Levi’s® most likely belonged to their son, William.

The Leadville Levi’s® are a pair of 1890s Spring Bottoms — a riveted denim cousin to the 501® jean. They are named for their “spring” or flare at the bottom of the hem and are considered the first Levi’s® flared jean. Spring Bottoms would have suited a store owner, clerk, office worker or other middle manager who preferred more tailored clothes.

Spring Bottoms were first introduced in 1889 and originally came in two colors, blue or grey denim. The Leadville Levi’s® are an unusual grey denim. With the new addition, the Archives now has examples of both blue and grey pairs.

Like 501® jeans, the Spring Bottoms have riveted pockets, but the pockets are rounded and tailored with unusual stitching detail. Such tailoring, which would have required a skilled sewing machine operator, meant that the jeans took longer to make and were more expensive than traditional 501® waist overalls.

The Leadville Levi’s® are a “No. 2” pair of Spring Bottoms that were cheaper to buy. They were made of more affordable second-tier denim and included a cloth back patch rather than a leather one. Other details include striped lining at the waistband, a back cinch, and brass buttons for suspenders and the fly. The cloth back patch is triangular and was placed on the center back of the waistband. It features our Two Horse Design trademark, a symbol of quality and strength. The bottom of the patch includes the sizing, in this case, 36 X 33.

One of the best details of the Leadville Levi’s® is the printing on the inside pocket bag underneath the front right pocket. The top reads “THE BEST VALUE,” calling out the more affordable “No. 2” value version Spring Bottom pant that was still a durable and high-quality product.

The Leadville Levi’s® now ranks as one of the oldest pairs of value jeans in our Archives, alongside our early 201® value jeans. They are evidence that LS&Co. has been in the value jeans market since its earliest days, more than a century before the DENIZEN® from Levi’s® and brands came to be. That’s quite a Levi’s®—and Leadville—legacy.