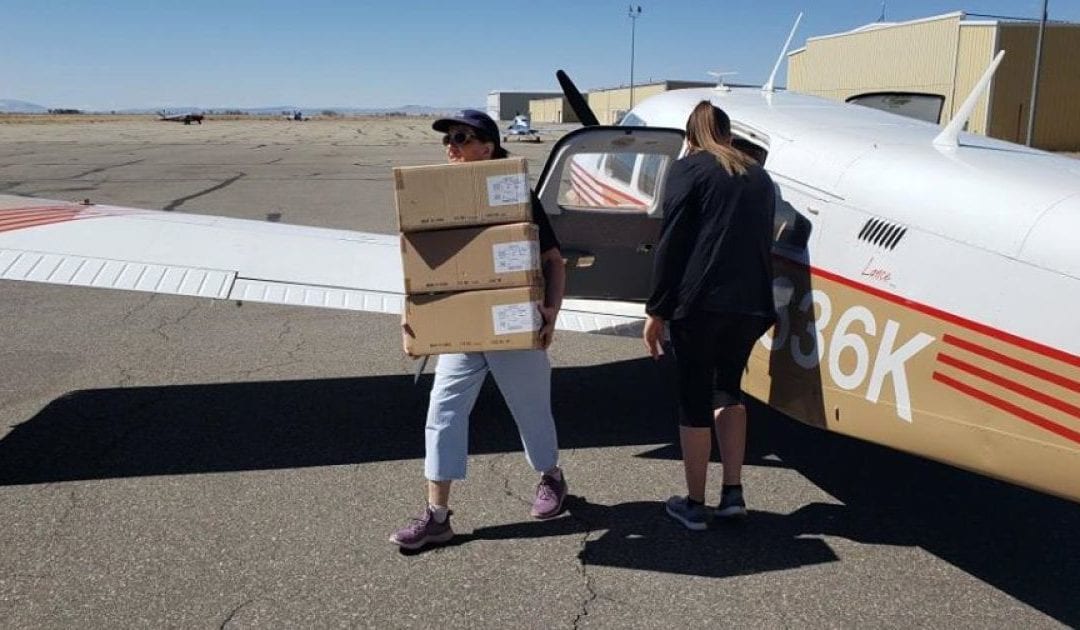 The airplane touched down on the lone runway of the Alamosa airport earlier this month, and its single propeller sputtered to a stop.

The pilot, Stan VanderWerf, donned a face mask and prepared to meet the welcoming party, which rolled toward his plane in a pickup truck.

“We complied with all the social distancing requirements,” VanderWerf said. “They did the unloading, and I stayed away from them.”

There were a few thank-you’s and some waves back and forth, VanderWerf said, “air handshakes and air hugs.”

Then, cargo unloaded, he jumped back in his plane and took off for home — another flight completed in one of the most extraordinary airlifts in recent Colorado history, a massive, volunteer-driven effort to get supplies necessary for fighting the new coronavirus to the rural hospitals that need them badly.

As of last week, there have been at least 26 flights to deliver protective equipment and other supplies to rural hospitals across the state, according to Angel Flight West, the organization whose pilots are conducting the flights. The supplies are all donated. The pilots fly for free.

The effort has distributed more than 17,000 masks — including more than 1,500 precious N95 masks and nearly 4,000 homemade masks. Flights have delivered hundreds of face shields and bags of alcohol swabs. One delivered a ventilator.

“You could tell they were pretty excited they were getting these supplies,” VanderWerf, who is from Colorado Springs and is also an El Paso County commissioner, said of his April 11 flight to Alamosa to deliver supplies to San Luis Valley Health’s hospitals. “My sense of it was the hospital was probably really low on masks, and they were very grateful for them.”

When San Luis Valley Health’s Conejos County Hospital began to see potential coronavirus patients last month, it also started burning through its limited supplies of protective gear like wildfire. In 30 hours of treating patients who possibly had COVID-19, the disease caused by the coronavirus, the hospital could use up as much personal protective equipment as it typically used in an entire year, said Kelly Gallegos, the hospital’s administrator.

At one point, the hospital was down to only a two-day supply, Gallegos said. And then VanderWerf’s plane arrived.

The hospital had planned to send an ambulance to haul the supplies, but it got called out, so the hospital sent the pickup instead. Even with his mask on, Gallegos said, it was clear that VanderWerf was smiling the whole time.

Combined with another delivery, Gallegos said the hospital feels much more secure now in its equipment supply. She said the hospital hopes eventually to be able to do something big to thank the pilots and other volunteers who make the deliveries possible.

“Sometimes I don’t know if words are enough for them to know how much we appreciate them,” she said.

The airlift is being organized by the Colorado Hospital Association, which collected gear donated during several equipment drives and through other efforts. Contributions from the Colorado Health Foundation, the Gates Family Foundation and other donors allowed the association to buy thousands of masks, hospital association spokeswoman Julie Lonborg said. Make4Covid donated face shields and other equipment. Project C.U.R.E. supplied the ventilator.

Angel Flight West pilots normally provide non-emergency flights for patients needing to get to medical appointments at faraway hospitals. VanderWerf has been doing flights for Angel Flight for a decade, and he said delivering supplies is something the organization has rarely, if ever, done before.

But the flights have been in high demand among Angel Flight pilots. VanderWerf said he volunteered for several coronavirus supply flights previously, only to find out they had been snapped up within hours of Angel Flight posting the mission. He got the flight to Alamosa, he said, because he volunteered within a half hour of seeing it available and because his plane, a Piper Lance, was big enough to haul the more than two dozen boxes being delivered.

Rural hospitals are especially vulnerable to equipment shortages because of how small they are and how little they normally use. When supplies are in high demand, distributors limit hospitals to their regularly ordered amounts — which isn’t very much for a rural hospital.

“We recognized fairly quickly that we were not going to be given priority,” Gallegos said.

So Colorado’s rural hospitals had to become especially creative to make sure they have enough equipment to handle any potential surge of coronavirus patients.

Distributions from state and national stockpiles have helped some. In eastern Colorado, the hospitals have teamed up in a consortium to pool supplies and take advantage of economies of scale. Still, Melissa Memorial Hospital in Holyoke has had to be thrifty with its personal protective equipment, looking for ways to save masks and other items here and there, said Elizabeth Hutches, a public relations specialist at the hospital.

“It’s taught us some things about what is essential,” she said.

But that’s also what made the airlift delivery such a welcome sight. Melissa Memorial is in Phillips County, in far northeastern Colorado. The county has seen a handful of confirmed COVID-19 cases, but Hutches said the numbers have leveled off lately. Now, the hospital is hoping it can soon get back to performing elective surgeries, which are vital for its finances — but it needs protective equipment to do those, too.

The hospital received boxes of masks and face shields in flights earlier this month. Staff members were so excited to receive the items, they made an “unboxing” video of them opening the packages. The face shields, Hutches said, are already being put to use.

“They put a lot of thought and effort and time into it,” she said of the volunteers who made the airlift happen.

“It was very nice,” she added, “just to get some of that stress taken off of us.”