The first two efforts to defund police in Colorado quickly failed. Will a push at CU be the first to succeed? 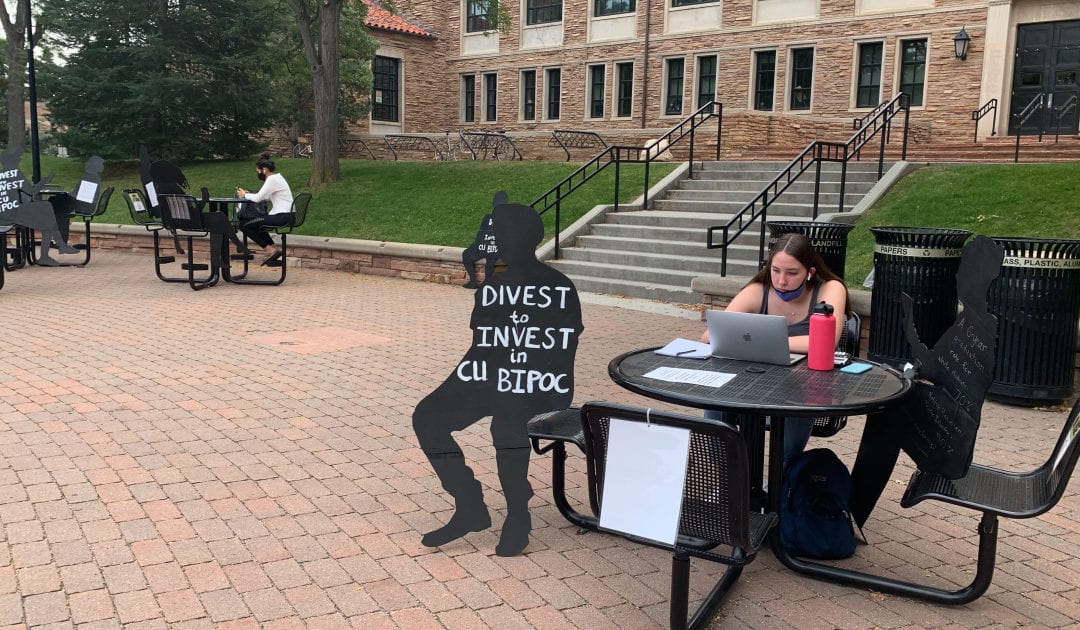 Massive protests in the wake of George Floyd’s death led to legislation to curb police brutality in Colorado. But two high-profile efforts to “defund” or reshape police departments and security forces have failed.

The Denver City Council and the board overseeing the Regional Transportation District this month rejected reappropriating law enforcement dollars to mental health and other social safety nets.

That hasn’t deterred a University of Colorado student organization from giving it a try. The CU group has picked up the mantle, hoping to set the path for statewide divestment, beginning on the more than 30,000-student Boulder campus, the largest in Colorado.

DiversifyCUnow, the group of BIPOC students, staff, faculty and alumni, now has ties with all four of the CU campuses in the state. On Aug. 18, the team of students, faculty and staff met with state Rep. Leslie Herod, a Denver Democrat who spearheaded the passage of Colorado’s police accountability bill in June, to discuss how defunding a police department might look different on a college campus, than in the city of Denver.

“Divesting from police is divesting from white supremacy,” CU student Gwendalynn Roebke said. “They’d rather speak over us, for us, instead of listening to us.”

The group hopes to reallocate some of CUPD’s $7.5 million budget towards mental health training for BIPOC students, by BIPOC students, specific scholarships and housing for students who are Black, Indigenous or people of color, and mandatory and annual 16-week diversity training for all faculty, staff and students.

CU is a predominantly white university. It is the least diverse in the Pac-12 athletic conference and the fourth lowest in the state. About 1% of the student population identifies as African American, and the majority of those students are athletes on the football or men’s basketball team, the group said.

The CU effort can learn from the Denver and RTD attempts to defund law enforcement.

The two efforts this summer, led by a Denver councilwoman and an RTD board member, proved that having conversations with as many stakeholders as possible will give their movement a better chance at success. By including many perspectives, they think more people will be open to the idea of reshaping police departments.

RTD on Aug. 11 voted down a proposal that would have ended the multi-county transit agency’s relationship with private security forces. Six days later, the Denver City Council voted 11-1 against a plan to replace the capital city’s police department with a peacekeeping force.

Councilwoman Candi CdeBaca proposed the bill that would have allowed Denver voters to decide in November whether to dismantle the police department and allocate 46% of its budget to a new department.

CdeBaca was the sole vote in favor of the bill. Councilman Chris Hinds, whose district includes the state capitol and city hall — where protests happened earlier this summer — was aggravated by the lack of transparency and timeliness of the issues presented in the bill.

“It’s one thing to participate in protests or to see the graffiti on walls around our district, and it’s another thing to consider how the specific legal language of a bill will change how our city interacts with its people,” Hinds said.

Denver Mayor Michael Hancock wasn’t happy with the way the bill was introduced either, calling it reckless and hypocritical.

Shontel Lewis, a member of RTD’s board of directors, earlier this summer introduced a resolution to end the agency’s ties with police officers and security personnel.

The board voted 14-1 against the measure, with Lewis casting the sole yes vote. Many members thought there were good ideas presented, but said the plan needed clarity about what the reallocation of funds means, before cutting the entire security budget.

“I think the community is still engaged in the topic of discussion and is really seeing the need for the reimagining of what safety and security could look like,” Lewis said. “I feel hopeful that we will work collaboratively to come back with a proposal that directors can align with.”

Lewis is interested to see what the group at CU will do next. She is focused on looking at safety and security in a new context by moving forward with the RTD proposal later this year.

“The police have operated in the same context for many many decades, so it’s hard for people to sometimes imagine the police, safety and security looking any differently,” Lewis said.

Members of the group at CU say their demands for the Boulder campus, which they say is functionally a city unto itself, are different than those of the surrounding cities.

CU chancellor Phil DiStefano on Aug. 18 announced the first community Safety Task Force for the campus. Representatives from CU’s student government and other student organizations will work with faculty and staff in shared governance to promote transparency and engagement between the school’s police department and its students.

“The new task force will evaluate community policing policies, practices and training and commend steps to ensure that public safety works for the entire campus community,” DiStefano wrote in a statement emailed to the CU community.

Many of the faculty members involved in DiversifyCUnow are residents of Denver. They see and experience racist policing in two large cities, Cheryl Higashida, associate professor of English, said.

Working with Herod, a CU graduate, has strengthened the group’s resolve. In the statehouse, Herod was central to the passage of the sweeping police accountability bill which passed as Denver was roiled by protests related to the death of Floyd at the hands of Minneapolis police, and is known for her legislation around criminal justice reform. She also serves on the board of the Caring for Denver Foundation, which has funded expansion of Denver’s Support Team Assisted Response program that pairs behavioral health experts with police officers responding to 911 calls that don’t require law-enforcement intervention.

“As the first LGBTQ Black legislator to be elected to the Colorado General Assembly, she gets why we need to reimagine public health and safety at CU,” Higashida said.

With a new social justice movement, primarily started and fueled by the younger generation, Herod thinks student voices must be heard.

“I think that the proposal by the students is a great starting place for CUPD to work with them,” Herod said. “We need more mental health professionals and just because we’re in a pandemic does not mean that (we) shouldn’t fund it anymore or fund it even better.”