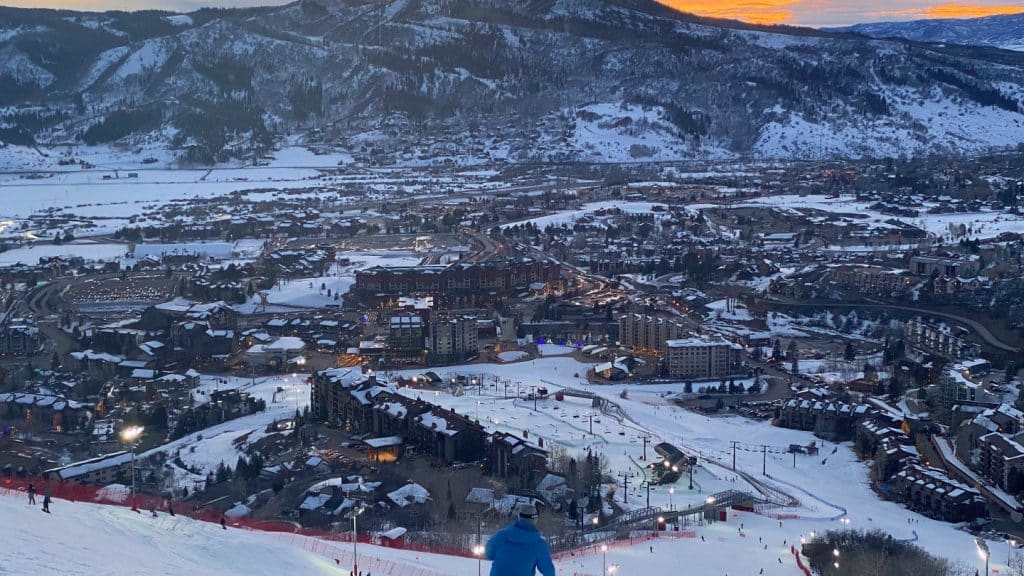 On the morning of March 14, Gov. Jared Polis studied data on coronavirus infection rates in Colorado’s ski towns, which were 20 to 30 times higher than the rates on the Front Range.

It was Saturday and the busiest day of the season for ski areas — the day when Colorado’s $5 billion resort industry welcomed the largest wave of big-spending, spring-breaking vacationers, pouring in largely from New York, Florida and Texas.

He wanted to shut down the ski areas. Immediately.

“There were many, many mountain communities that said, ‘This is our livelihood. This is our business. We need the tourists.’ But I’m making the decisions based on the science and the data. Eagle County has one of the highest infection rates in the country,” he said in a recent interview. “If we had not acted early … not only would those numbers in those mountain communities be higher, but more people would have brought the virus back to the Denver metro area.”

Melanie Mills spent that Saturday on the phone. The longtime head of the influential Colorado Ski Country trade group spoke with the governor several times as he leaned toward an unprecedented executive order requiring all resorts to close immediately. She was collecting thoughts from her 24 member ski areas and urging Polis to give them a day to close.

“We pushed hard for a more orderly closure than 8 p.m. on the busiest arrival day of the year,” she said. “It was a pretty intense time.”

Mills said she was not privy to health statistics Polis was seeing, but the industry remains confident the governor acted in good faith, making his decision based on public safety.

“It was a traumatic decision for the ski industry and it was one that was made for us and not on our timetable,” Mills said. “That was tough on operators, our communities where we operate and on our guests.”

In Telluride, resort captain Bill Jensen woke up Saturday to brilliant blue skies. His ski hill was about to wrap its best season ever.

“Everything was going great and then poof,” he said.

He had pulled some tables from mountain restaurants to keep people apart. Lift attendants were preventing bunching in lines. Skiers seemed to be following social distancing rules. The lifts were starting to close around 3:30 p.m. when he got a voicemail from Mills. She said she had a call with the governor coming up and wanted to touch base.

“I got a premonition,” Jensen said. So he texted Rob Katz, the head of Vail Resorts, asking what was up. They hadn’t connected in months. Katz called him immediately and told him he was shutting down his company’s resorts for eight days.

“All the Colorado resorts?” Jensen asked. “He told me, ‘No. All of North America.’”

Minutes later, at 4:09 p.m., Vail Resorts, the largest resort operator in the continent, began the chain reaction that would see all of Colorado’s ski areas closed by nightfall and resorts across the world closed within days. Katz suspended operations at 34 resorts in 15 states and Canada.

Then Jensen called Mills, who told him the governor wanted ski areas to shut down for at least eight days. An executive order was coming, she said.

There were just three weeks left in Telluride’s season, so Jensen preempted Polis and announced the southern Colorado resort was ending early, the first to say it was closed for the season. It would be a few more days before other resorts recognized the futility of pretending the coronavirus pandemic would be over in a week.

Jensen weathered blistering attacks from his loyal skiers for two hours before the governor’s order was announced at 8 p.m.

“People were calling me, saying, ‘What are you doing? Why are you doing this?’ And then the order came down,” said Jensen, who is co-owner, president and spokesman for the Telluride ski area. “We did it our way, and it was the right decision.”

Polis said he’s heard from resort operators and community leaders who now recognize the need for the swift closure.

“It’s human nature. Probably some of the folks who were saying, ‘Don’t shut down our community’ and ‘Keep the tourists coming’ are the same people now saying ‘Why didn’t he shut us down earlier?’” Polis said. “When you’re in elected office, you’re accustomed to that on a variety of issues. There’s heated emotion. That’s totally natural. Yes, some people were very upset at the time. Now, with what we are seeing in our mountain communities there’s a greater understanding why it needed to occur.”

Rusty Gregory, the head of Alterra Mountain Co., was more than a week into social distancing by the time March 14 rolled around. He had closed the base lodge at his company’s Crystal Mountain resort near Seattle on March 7 as the contagion swept through Washington.

His team watched the spread of COVID-19 in California and Colorado as they geared up for a busy weekend to cap the week of March 9. Closing the base-area lodge at Crystal had worked to keep skiers apart, but could that be done at Alterra’s much larger resorts in the two busiest ski states in the country?

A big storm was bearing down on California, with the promise of the first fresh snow in more than two months. Winter Park and Steamboat ski areas were ready for their regular surge of weekend visitors. State health officials in both states were imposing distancing requirements. Gregory said, as he worked through the week and watched the spread, he and his resort captains knew they had to close all their ski areas.

At first, they pursued a plan “to close slowly and in an organized fashion,” Gregory said.

“But it became clear to me that once you come to the conclusion that it’s not good to bring people together, it became imperative for us to close down immediately,” he said. “I went to bed that night convinced I had been too reactionary and it was the wrong thing for our guests and for our employees. By the middle of the next day, it was clear we had done the right thing.”

It’s been a month since Gregory pulled the plug on 15 ski areas in a matter of hours.

“This has been the antithesis of every experience I’ve had in my 40-plus years in this business,” Gregory said, noting that his decade at southern California’s Mammoth ski area revolved around opening up early and staying open “as absolutely late as possible.”

“So this was a very foreign frame of mind to be in,” he said. “It was the right decision but it was very much an unnatural act.”

Mike Kaplan, the head of Aspen Skiing Co., had just hiked to the top of Aspen Highlands Bowl when he got a call from Pitkin County officials that the governor wanted ski resorts to do more than limit access to facilities and chairlifts.

He had 3,000 workers on the schedule for the next day. His team had a list of even tighter restrictions — like closing all facilities and shutting down gondolas — ready to go. He skied down the bowl and spent the next several hours preparing for additional measures. At 5 p.m. he saw the news that Vail Resorts and Alterra Mountain Co. were closing their ski areas, including Vail, Beaver Creek, Keystone, Breckenridge, Winter Park and Steamboat.

“I said that’s the indicator that it might be time,” Kaplan said. “Just talking about it now reminds me of the song ‘American Pie.’ You know, ‘The day the music died.’”

He got on the phone with local health officials and started making plans to shut down his four Roaring Fork Valley ski areas by the end of the day Sunday.

But then his team heard the governor wanted more immediate action. Polis wanted resorts to close right then.

“There was a little back and forth about whether that was mandatory or optional and by Saturday evening it was mandatory,” Kaplan said. “It was a crazy several hours. But when the governor said shutting down would save hundreds of lives, we said ‘OK, we are done.’ And really, him saying that made the decision easier for us.”

Polis said several resort operators who were asking for an additional day or two have come around.

“I think they understand now that it would have been a longer and worse disruption to their business and of course ultimately cost many lives had we not acted,” Polis said.

Kaplan and his team in early March had scripted a five-stage response to the pandemic. They didn’t get to finish it.

“We went from Stage 3 to Stage 5 in a matter of hours,” he said, noting that the crew is writing a Stage 6 right now that details recovering from the closure. “We fully support the governor and what he is doing, and we appreciate the state’s efforts to keep us safe and hopefully get us restarted.”

The Colorado Sun is a reader-supported news organization dedicated to covering the people, places and policies that matter in Colorado. Read more, sign up for free newsletters and subscribe at .