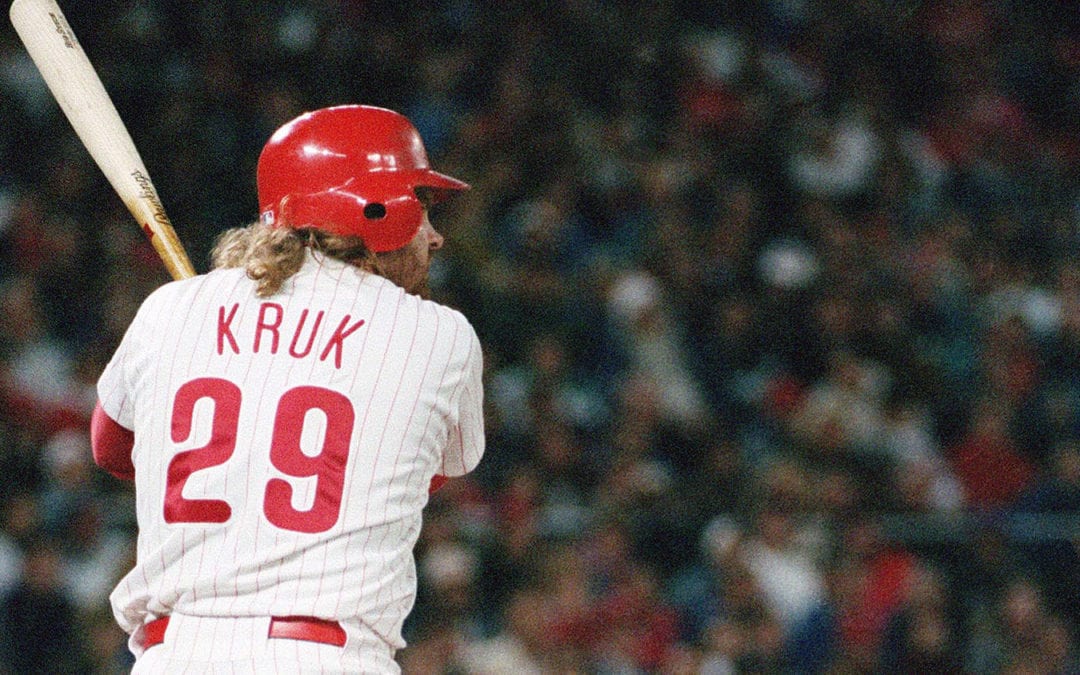 All these years later, the hair on the back of my neck still stands up when I think about it.

Phillies home opener at Veterans Stadium. The Colorado Rockies were in town.

And John Kruk was back in the lineup.

The Phillies should be playing their home opener today. They should be coming back home after seven games on the road. Dan Baker should be calling new skipper Joe Girardi’s name for the first time. Jake Arrieta should be toeing the slab. The ‘Everybody Hits’ guy should be doing his thing. Bryce Harper’s long mane should be flopping in the wind as his helmet flies off and he dives into second base with a hustle double.

Of course, there is none of this today. Ballparks and arenas all across the land are closed as the sporting world, the entire world, deals with this beast called coronavirus.

There’s an old saying in baseball that no one is bigger than the game. Coronavirus has proven to be the exception.

But while baseball has paused, our baseball memories, thankfully, have not. And that’s why today I’m reliving my favorite Phillies home opener, the day cancer-stricken John Kruk, just a few days after his 33rd birthday, literally rolled out of a radiation treatment and smashed an RBI double in his first at-bat of the season as 58,627 of his best friends looked on in amazement and showered him with loud adulation from the seats.

“It was the loudest I’d ever heard Veterans Stadium — and we had just clinched a pennant and played in a World Series there six months earlier,” Frank Coppenbarger said.

Coppenbarger, the Phillies’ equipment and clubhouse man in those days, was on the first base line as the team received their 1993 National League championship rings during introductions.

Kruk was the last player to be introduced and the crowd erupted as Baker, still the Phillies’ PA man, announced his name.

“The introduction was plenty loud,” Coppenbarger recalled. “But when he hit that double, I thought the place might crack and fall apart. It was a deafening roar like I’d never heard in any ballpark.

“You couldn’t help but have a lump in your throat.”

We checked in with Ed Wade, then the Phillies’ assistant GM, Larry Bowa, then the third base coach, Dave Hollins, then the starting third baseman, Larry Andersen, then a teammate, Baker, and Mike DiMuzio, who still oversees stadium ops for the Phils.

They all mentioned the ovation, the roar that rose from the crowd, as Kruk’s bat met Colorado pitcher Mike Harkey’s 3-1 fastball in the bottom of the first inning.

“It was unbelievable,” DiMuzio said. “Right up there with 1980 when Tug (McGraw) struck out Willie Wilson (to clinch the World Series title).

“But for an individual player, it was the loudest ovation I ever heard at the Vet.”

The Rockies’ catcher that day was none other than Joe Girardi.

He did not recall the moment, but at least he had an excuse.

“Too many foul tips,” he said.

The thunderous ovation that Kruk received that day was rooted in the 1993 season. Phillies fans loved that team for its character and its characters and Kruk was one of the most popular, and productive, characters. But the ovation, and what made the moment so memorable, was intensified by the public battle that Kruk had gone through in the previous weeks.

Kruk had been diagnosed with testicular cancer during spring training. While the team trained in Clearwater and went to Denver and Cincinnati for the first six games of the season, Kruk was in Philadelphia undergoing treatment at Jefferson Hospital. When he felt good enough, he’d head down to Veterans Stadium and take some swings against Dickie Noles. Sometimes there was ice on the field.

At home in Florida, 26 years later, Kruk picked up the phone the other day and recalled his ordeal. Bill Giles had arranged for him to stay in a hotel a few blocks away from the hospital as he went through his treatment. After every treatment, Kruk would walk back to the hotel and throw up. When he felt better, he’d eat the soft pretzel that a nice vendor would give him every day as he walked back to the hotel.

“I think I had a soft pretzel 25 straight days,” he said. “I offered to pay the guy and he said, ‘No. Just get better.’ I would love to find out who that guy was.”

Throughout his treatment, Kruk had eyed the home opener for his return. As the club headed to Cincinnati for a weekend series with the Reds, he headed to Reading for three rehab games. He received a radiation treatment before Friday’s game. He did not have treatment on the weekend and felt good during the Saturday and Sunday games.

The home opener was on a Monday afternoon. Kruk had a radiation treatment that morning then reported to Veterans Stadium, where he was reunited with his teammates. Regardless of whether he’d be activated from the disabled list or not, he was going to take the field for introductions and the ring ceremony.

But Kruk wanted to play. His cancer doctor had cleared him — as long as he had the energy to do it after the radiation treatment. After arriving at the park, Kruk lobbied the Phillies medical team and general manager Lee Thomas and manager Jim Fregosi to put him on the active roster. An hour before game time, outfielder Tom Marsh was sent to Triple A and Kruk was activated.

Before the game, club officials gave the players instructions regarding introductions and the ring ceremony. Kruk would be introduced last. Orders from above.

“I didn’t like that,” Kruk said. “We were celebrating the National League championship that day. I didn’t want it to be about me. I get it, I had cancer. But it was supposed to be about the team goal we accomplished, not me.”

He was introduced last.

And as he made his way down the row of teammates and coaches stretched along the first-base line, with a chorus of cheers behind him, he began to realize the magnitude of the moment.

“Vuke was in tears,” Kruk said of the John Vukovich, the late, great Phillies coach. “Bowa had tears in his eyes. These are tough men and to see that — that’s when it hit me. I thought to myself, ‘Don’t screw this up.’ “

The moving moment became even more emotional just a few moments into the game when Kruk, batting third in Fregosi’s lineup, came to the plate in the first inning. There was one out and Mariano Duncan was on first base. Kruk worked the count to 3-1 and guessed fastball. He got one up in the zone, where he liked it.

“I knew my timing wasn’t good, so I knew I had to start my swing early,” Kruk said. “I knew Harkey liked to challenge guys with his fastball and I was just hoping I’d get one because I don’t think I would have hit anything else. Luckily, I got one.”

The ball rocketed off Kruk’s bat into the gap in right-center. The crowd erupted. Duncan scored from first. And as Kruk gathered himself at second base, the roar of the crowd continued to swell.

On the outside, Kruk played it off and turned his attention to being a base runner.

On the inside, he was overwhelmed.

“I was like, ‘Holy crap, what just happened here?’ ” he said. “That hit was a big weight off my shoulders. I mean, six weeks earlier, I didn’t know if I’d ever play again.

“I remember how loud the crowd was. Walt Weiss (Colorado’s shortstop) walked past me and said, ‘Hey, dummy, tip your cap.’ I’m still not sure if I did. I didn’t know what to do so I just went back to playing.”

Kruk quickly found himself rounding third when his buddy, Hollins, drove a double down the right-field line. As Kruk crossed home plate, he shook hands with Darren Daulton, another close buddy, and continued on to the dugout, where he was greeted by teammates who couldn’t believe what they just saw.

“Some guys were jokingly pissed off,” Kruk said with a laugh. “They went through an entire spring training and I had a handful of at-bats against Dickie Noles on the ice at the Vet. Guys were like, ‘It shouldn’t be that easy.’ It’s not. I got lucky.”

The first-inning double was one of three hits Kruk had on the day. That ain’t luck. The Phillies lost the game, 8-7, and Kruk recalled, “by the time I had my last at-bat, I was worn out. From the emotion of it all, the radiation in the morning, begging them to play, finally playing, I was whipped.”

Through the magic of the internet, you can watch the Phillies’ 1994 home opener on your computer screen.

You can watch it.

I can watch it.

“I remember a lot about that day,” he added. “It was really special. As players, we had the feeling of being embraced because of what we did the year before, and for me …

“I’ll always be a guy from West Virginia. But I felt like a Philadelphian that day. That ovation. My God. It left me thinking, ‘I love this place.’ “