The coronavirus campaign shows partisan split in Colorado, as top candidates mostly keep out of view 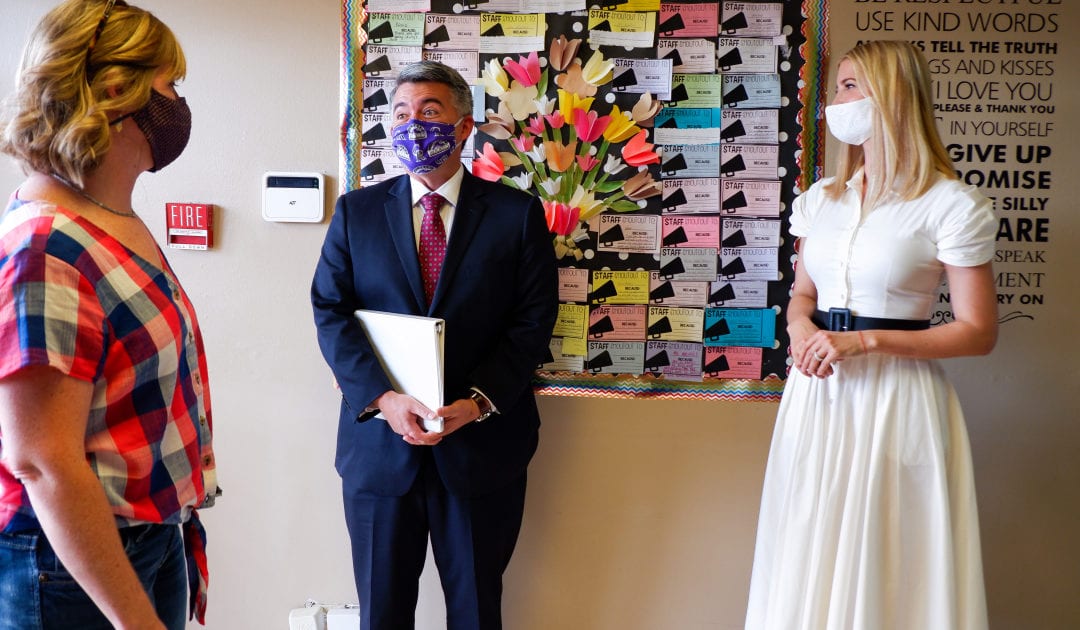 In a typical election year, the political campaign is a process — by definition, a series of activities that candidates undertake to win elected office.

This year, amid the pandemic, the act of campaigning is a political statement.

For candidates, the choice to hold events or wear a mask serves as shorthand to voters about how they view the coronavirus and where they stand on public health mandates.

“The fact that the coronavirus is political. … I think both candidates and campaigns are weighing that in their strategy,” said JoyAnn Ruscha, a former Democratic strategist. “It shouldn’t be this way, but this conversation has turned political and voters have pretty strong opinions on these public health measures.”

Like other political issues, the decision about whether to campaign is exposing a partisan divide in Colorado. And the elevated stakes — as much as the fear of coronavirus exposure — are leading top-tier candidates to play it safe and campaign in a bubble.

The campaign trail essentially shut down back in April amid the statewide lockdown order. The candidates moved their events online to virtual forums or telephone town halls. The events often drew large crowds, in part because people didn’t have to travel to participate. But the novelty is fading and campaigns are being forced to try other ways to engage voters.

“People are tired of doing everything through their computer and Zoom,” Ruscha said. “In the beginning it may have been OK,” she continued, but now candidates “are finding this is really difficult.”

Republican state Sen. Kevin Priola is taking a dual approach. The Henderson lawmaker, who is campaigning in a key swing district, prefers virtual Zoom meetings and phone calls to events. But he is still spending plenty of time knocking on doors talking to voters.

Priola keeps a minimum 10-foot distance but finds it easier to talk to voters without wearing a mask. He said some voters are nervous to talk at the door, but then others will approach him without fear.

“There are people who think it’s a big hoax and not real, but I just tell them I’m trying to stay 10 feet from them,” he said. “They respect that I’m trying not to be the (infection) vector for the precinct  — because that’s a pretty good way to lose an election.”

The different approaches to campaigning amid the coronavirus are evident at the top of the ticket in Colorado.

The Republican Party is projecting the image that the nation is on the path toward recovery from the public health and economic crisis. And Democrats are taking a more cautious approach. The divergent sentiments are reflected in national polls that show a partisan split in how voters view the pandemic.

When the Republican Party resumed in-person campaign activities in mid-June, officials issued guidelines to candidates that emphasize the need to adhere to local and state public health orders. The recommendations include wearing a face covering, stepping back 6 feet from a voter’s door and asking before leaving campaign materials.

Jefferson Thomas, the Trump campaign’s Colorado director, said the pandemic isn’t thwarting plans to build an unmatched political organizing operation. One of the lessons learned from Trump’s loss in Colorado in 2016, he said,  is the need to create “meaningful relationships with volunteers and build an operation that can be effective in targeting communities.”

This election cycle, he said Republicans “have had a field program and presence here for more than a year — and Democrats don’t.”

Ernie Apreza, the Biden campaign’s state director, said Democrats are relying instead on virtual events and digital outreach to keep people safe. “I think for us our decisions are out of an abundance of caution for our staff and our volunteers and the voters we are trying to engage,” he said.

The situation could change in the future, he said. “Our ultimate goal of engaging voters where they are at is the same,” he added, “but we are just having to be innovative in how we do it.”

The state party is moving ahead with a new online platform called Voterfied that launched at the start of the month. Colorado Democrats are the first state party to join the platform, which allows verified registered voters to vote and comment on top issues. It is billed by its creators as a “political Nextdoor” that allows voter engagement without the noise and vitriol of social media.

Still, Democratic strategists and the Biden campaign acknowledge the absence of in-person canvassing is a significant setback. In prior elections, the strategy helped lift them over Republican candidates up and down the ballot.

“We always had a really strong ground game through canvassing and talking to voters, but that’s completely changed this year,” said Brittany Pettersen, a Democratic state senator and political strategist.

This year, she said, “a lot of Democratic candidates aren’t doing that because they don’t want to endanger their volunteers or their constituents.”

The pandemic is leading candidates to campaign in bubble

The polarization surrounding the coronavirus response — not to mention the election — is leading candidates in the state’s premier U.S. Senate and congressional races to take a guarded approach to the campaign trail.

So far, the campaign is one of the most cloistered in recent memory and allows candidates in both parties to escape scrutiny from voters and the media about where they stand on major issues.

U.S. Sen. Cory Gardner, the Republican incumbent, is holding most campaign events and fundraisers out of public view, part of a prolonged pattern that allowed him to avoid potential critics who wanted to confront him with questions. His campaign held four events this week, but spokeswoman Meghan Graf would not share details or allow reporters to attend. She did not return a call about other questions.

Other official events coordinated by his Senate office are occasionally made public — such as a ground breaking Wednesday at the National Renewable Energy Laboratory in Golden — but Gardner doesn’t provide widespread advanced notice about most of them.

He is currently on a statewide “Tailgate Tour” that hopes to visit all 65 state House districts, according to the Pueblo Chieftain, but his campaign does not widely publicize the events until after the fact.

Melissa Miller, a campaign spokeswoman, said the events are invite-only to keep them at 10 people or less, per public health guidelines. She declined to answer other questions. But she said in a statement: “We have followed all guidelines and will continue to do so.”