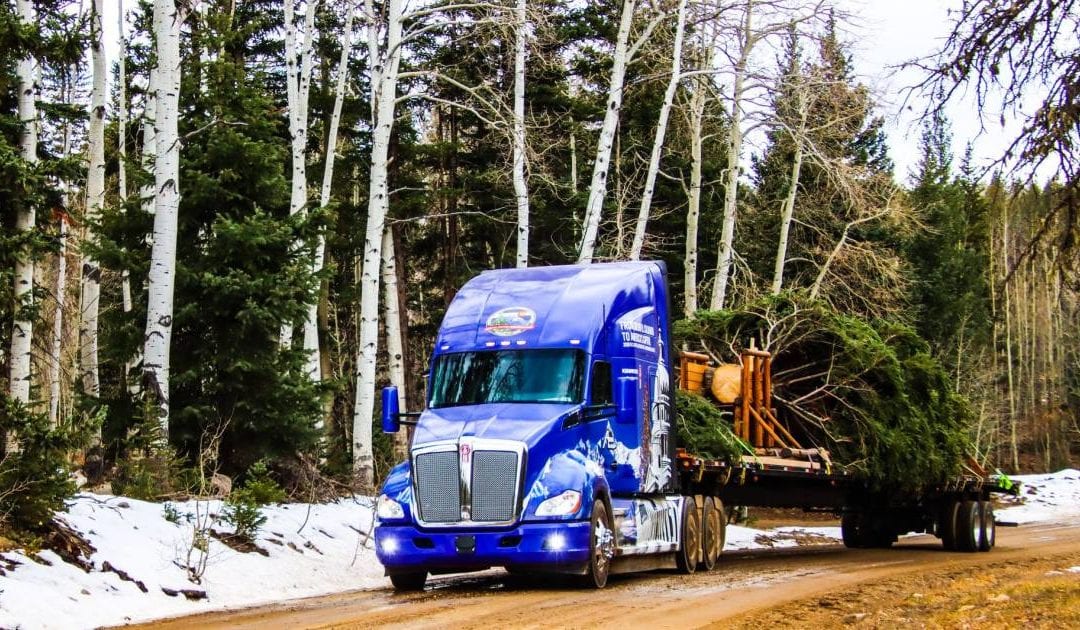 OURAY — When it began to grow, the world was in turmoil.

President Franklin D. Roosevelt had started his second term. Eight million people were out of work, some were starving. Roosevelt inherited a country mired in the worst economic crisis in U.S. history — The Great Depression.

The seedling grew, its branches reaching toward the sun, and bit by bit, grew taller than its neighbors. It survived droughts, pests and wildfires.
The little spruce continued to thrive in the forest, under the Colorado blue sky, unaware of other generation-defining events. Wars, protests, recessions, 9-11. More wars. And now, a virus.

As a crowd gathered at the tree slated for the nation’s Capitol on Nov. 5, people said they hoped it would serve as a source of inspiration to unite a divided country, just as they imagined the first Christmas tree purchased for the Capitol did in 1919. That was also a tumultuous year for the country, just after the Spanish flu epidemic as World War I ended. Women gained the right to vote, the first Red Scare happened, Prohibition began, strikes and race riots spread across the nation.

The symbolism of the Capitol Christmas tree tradition beginning then and continuing during difficult times, even in a pandemic, wasn’t lost on some who witnessed the tree cutting, including state Rep. Matt Soper, a Delta Republican.

“It gives us light in times of darkness,” Soper said in his speech to the crowd.

On this day, with the rev of a chainsaw and a crane ready to lift it onto an 80-foot trailer, the tree would complete its destiny. It would begin its journey to the lawn of the U.S. Capitol building and represent the holiday for all Americans this Christmas.

Even getting this far in the process of selecting and cutting a Capitol Christmas tree in such a bizarre, uncertain year was no small feat.
When the forest was selected to provide the tree a year ago, everyone assumed the process would work just as it had the previous year, when the tree was harvested in New Mexico.

“About a year ago, things were very different,” said Chad Stewart, the forest supervisor for the Grand Mesa, Gunnison and Uncompahgre national forests. “As you and I both know, the atmosphere we’re in has changed immensely.”

But despite all the challenges, Stewart, Ouray District Ranger Dana Gardunio and others were determined to continue the tradition. No one wanted to cancel Christmas. People needed it now more than ever.

This year, the architect of the capitol chose the tree virtually, with U.S. Forest Service staff submitting dimensions, photos and videos of the candidates to him in Washington, D.C. It’s customary for the architect to visit the tree candidates in person, but the virus nixed those plans.

They began with 16 trees, whittled the list to six, and finally, there were three finalist trees – with all their locations kept secret until the last minute, for fear something would happen to them. The architect selected the 55-foot-tall Engelmann spruce from all the trees in the 2.9 million-acre forest.

Up until a week before the tree cutting ceremony, Forest Service employees kept mum on the tree location. It had to be a tree roughly the same dimensions of others selected before it, one that was symmetrical and esthetically pleasing. It also needed to grow where a semi-truck could access it.

The tree received some extra patrols from forest rangers, quietly checking up on it. After all, it grew on the edge of a popular dispersed camping area where a campfire or other threats could interfere.

About a week before the ceremony, staff parked a camper under the tree, just off Divide Road, to inconspicuously claim the space. No one bothered it and the tree stood ready for the cutting ceremony.

After a crane hoisted the tree into the air and guided it to rest in secure, wooden cradles, driver Butch Hanna took his precious cargo and began the tree’s journey, a whistle-stop tour of several Colorado locations before heading cross-country.

Hanna, who has worked for Apex Transportation in Denver for 18 years and has driven for 41 years, is well aware of the significance of this cargo and considers it a big responsibility. He and fellow driver Theron Schmalzried will transport the tree, tied tightly in the trailer and kept hydrated with a bladder filled with water on its journey so it arrives fresh and still full of needles.

“’Boy,’ I thought, ‘what a way to end your career,’” Hanna said during a stop on Wednesday in Ouray.

His favorite part so far was surprising a group of Olathe school children, doing a drive-by of their school and having them wave and cheer.

For someone used to transporting heavy freight like a train caboose, iron beams or bridge girders, hauling a Christmas tree makes him feel a little bit more appreciated.

“Usually you’re getting the one finger, not the whole wave,” he said. “For the first time in 41 years, I’m kinda liked.”

He hopes the tree brings others joy, just as it has brought him joy to shepherd it across Colorado. Others agree.

“This symbol I offer you is of unity and hope,” Stewart told the crowd on Thursday during the ceremony. “After this election I think we could all use a little more unity and hope.”

He said it’s humbling to think something that grew in western Colorado could have such a ripple effect – maybe the tree will be an antidote to division, in a country divided by a pandemic, by a contentious election and the uncertainty that lies ahead.

Montrose County Commissioner Keith Caddy said he hopes this gift from western Colorado will help folks in the nation’s capitol find common ground. Perhaps this evergreen tree, a gift from the outdoors which so many have flocked to during the virus, will serve to unite.

As they loaded the tree onto the semi-trailer, a few pine cones rained down into the ground where the tree once stood. Snow would soon blanket them, beginning the process again.