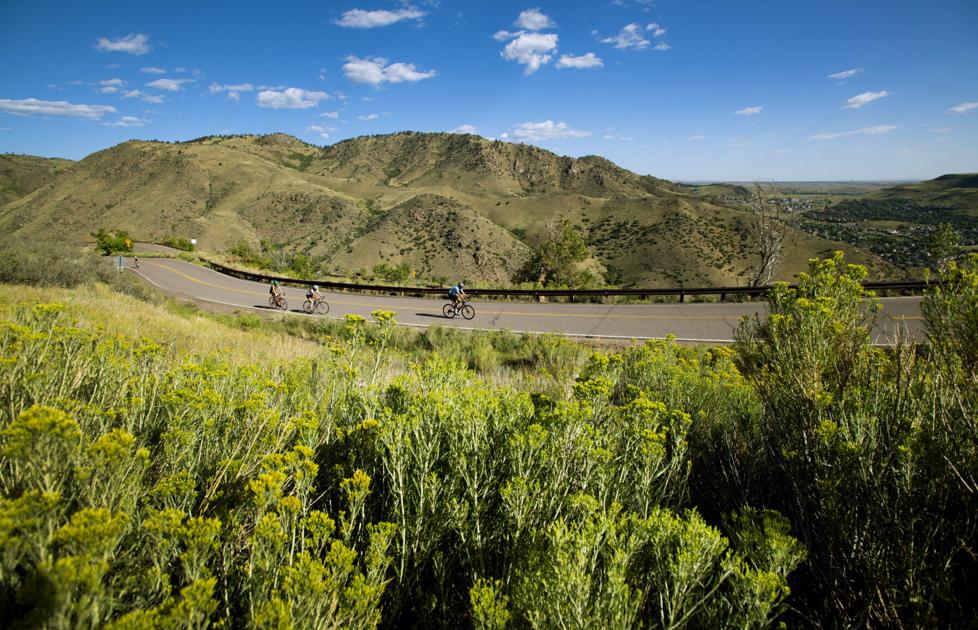 “This is the guy the website is dedicated to,” Haraway, 73, says here at the base of his favorite place, Lookout Mountain.

The guy is Ray Bolton, whose two wheels are legend on the mountain. The website is CyclingLookoutMountain.com, a first-year resource for one of the Front Range’s most popular and respected uphill contests. “A rite of passage,” the site calls it.

The high, rolling backdrop of this Denver suburb is proving ground for outside challengers and casual, committed locals alike, a test of mettle on lung-busting, leg-burning pavement ascending nearly 1,300 feet over 4 1/2 miles.

Thousands of cyclists every year churn their way up the 7,377-foot mountain. “Pillar to post” is the motto, a reference to the top post pointing to the Buffalo Bill Museum and the historic, brick pillars below — like a gateway to heaven, or to hell, depending on who you ask.

As Molly McNamara put it in a blurb for CyclingLookoutMountain.com, recalling what her fellow Colorado racers say: “It never gets easier.”

The rewards are the views of the city, its tabletop summits and the distant Continental Divide, along with coffee at the shop by Buffalo Bill’s grave — a proper recharge for the fast, thrilling descent.

The grade is neither gentle nor extreme, the length neither short nor long, contributing to it as “the perfect training ride,” says Bill Plock. He grew up in Golden and owns and operates 303cycling.com, the hub for the sporting scene around Denver.

Lookout Mountain “is the standard,” Plock says. “It’s the barometer for sure.”

He was known as the sheriff of the mountain, the tough codger calling out drivers and fellow cyclists for breaking rules of the road. He was “three-a-day Ray,” one lap on the morning never enough, rain, snow or shine. He was leader of Team OCB, a small group of 70-somethings including Haraway — “obsessive compulsive behavior,” they call it, easily confused for “obsessive cycling behavior.”

In spring of last year on Lookout, Bolton was building on the 7,915 rides he had logged in 32 years. A mysterious illness overcame him.

Haraway took him to the hospital. Bolton remained there for six weeks, until May 11.

His memory lives on at CyclingLookoutMountain.com. Haraway’s creation is meant to celebrate the ride that fueled his friend — and to spread the sheriff’s message on safety.

“Ray’s Rules” are listed, best practices to avoid the worst on the busy, tight road.

Assume cars have the right-of-way, Bolton advised. Do not cross the yellow line. Call “on your left” when passing another cyclist. Never pass in between others. And never underestimate blind curves, especially on the descent.

The ride down can be hair-raising for the uninitiated. For the familiar, the mountain feels safe.

“I’d rather ride here than pretty much anywhere else,” Plock says.

That’s due to the 20 mph speed limit and the sheer number of cyclists keeping drivers alert. (In one 12-minute interval, Haraway says he counted 176 bikes to 20 cars).

“In theory, the cars overtaking you are going much slower than any other road in town,” says Megan Hottman, a local racer and Lookout regular since 2006.

Jefferson County is currently in the middle of a comprehensive analysis of roadway crashes. The last such analysis found two cyclist-involved crashes on the mountain in 2015.

That is believed to be the last year a rider died here. An impaired driver collided head-on with a young father.

The tragedy went on to show the camaraderie inspired by the mountain. To raise funds for the man’s family, riders hosted a 24-hour fest. One logged a record 22 laps, a prime showcase of another Lookout Mountain hallmark: persistence.

The social and physical promises of the road have kept Charlie Myers coming back. Upon starting on the mountain 20 years ago, he found mental benefits, too. “I found myself transported,” he recalls. “I just found it so uplifting.”

Nowadays with ever-rising traffic on the road, Myers also finds it concerning. He’s an advocate with Bike Jeffco, the nonprofit focused on keeping people on bikes safe. Hottman has a similar mission; she’s an attorney exclusively working for injured cyclists.

“We need motorists to see us as fellow humans, period,” she says. “Our lives on two wheels matter just as much as they do on four wheels.”

“I think it’s gotten better this last year,” he says. “People are starting to acknowledge each other, people are waving and saying hello. I really like seeing that.”

The sheriff of the mountain would really like seeing that.