The $300 “Lost Wages” bonus begins, Amazon is hiring like crazy and answers from Colorado’s labor department 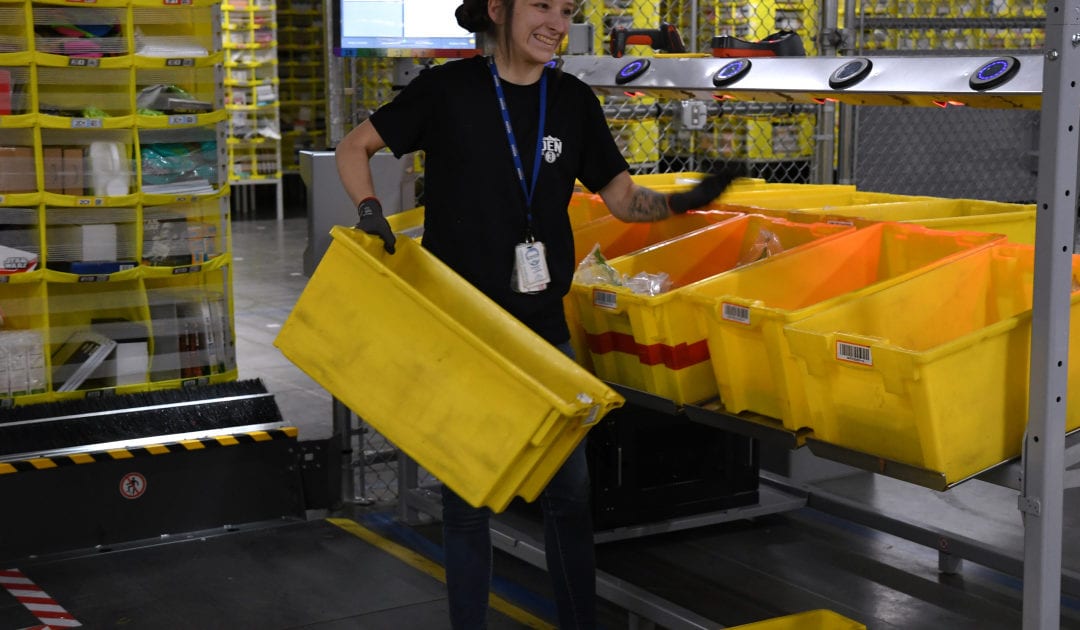 Lost Wages Assistance payments have begun in Colorado but not without many technical difficulties. I’ve been tracking it all week so skip down below to see the latest updates.

In other employment news, Amazon said this week that it’s adding another 1,900 jobs in Colorado to join its existing 10,500 workers in the state.

Most of the new jobs are in existing warehouse and distribution centers in Aurora and Thornton and pay a minimum of $15 an hour. But the company has similar-paying jobs available in Colorado Springs, Fort Collins and Loveland. They’re also not just packing and shipping jobs. There are openings for managers, human resource assistants and data center technicians.

And one thing Amazon spokesman Av Zammit wants to be clear about: “These are not seasonal jobs,” Zammit said in an interview this week. “These are permanent full- and part-time jobs.”

They’re also “across the state,” he added, though he declined to say whether that means Amazon is expanding to the Western Slope or south of Colorado Springs.

Amazon has become one of the state’s top employers, for better or for worse. With the number of people out of work due to the coronavirus slowdowns and safety measures keeping the hospitality and tourism industry from fully rebounding, these jobs could offer some folks an opportunity to get back to work.

Zammit said that benefits start on the first day and include health coverage and a 401(k) retirement match. Once hired, a worker can join its Career Choice program, through which Amazon pays for 95% of the tuition for training in high-demand fields. Some jobs also include a sign-on bonus.

The company also needs more corporate and technology workers “with a starting salary of $150,000,” he said. Last month, Amazon said it had 230 tech jobs open in the Denver area, which includes its new 20,000-square-foot tech hub near Larimer Square. Teams at its Denver hub are working on Amazon devices like Echo and Fire TV, plus developing software for AWS health care customers.

When the labor department beckons, the unemployed pay attention.

A message sent Monday to 220,000 eligible folks on regular unemployment asking them to certify for the Lost Wages Assistance (LWA) program overwhelmed the system. About 30,000 ultimately got through by Thursday evening, but that was after days of intermittent outages, a reboot and the virtual assistant tool being disabled. It’s working now.

Certification is your word that your unemployment is due to COVID-19. Only people on regular unemployment need to certify. Gig workers and self-employed folks on Pandemic Unemployment Assistance don’t need to do this because that’s the whole point of PUA — your employment was disrupted by COVID.

Those eligible for the $300-per-week program must have already received unemployment benefits between July 26 to Sept. 5 (a full six weeks!) of at least $100 a week. (And if you need to correct past wages, there are instructions on the state’s Lost Wages site on how to do that.)

The first payment request covering 28,000 users was submitted Thursday night to the bank that the labor department uses. The next one, to cover 94,000 users, was expected to be submitted Friday.

How payments will work:

The labor department hasn’t set a deadline but, “if claimants are timely in their certification, then our goal is to see that both installments and the payments are made in advance” of Sept. 30, said Jeff Fitzgerald, director of the state’s unemployment insurance division.

Dividing payments into two installments is meant to make the process as equitable as possible, so folks who are late to certifying will still get at least three weeks of bonus benefits. But it’s still first come, first served and the $553 million from the federal government is expected to run out. Those who are denied benefits or are too late will be notified.

To certify, go to and type “lost wages” in the chat box. The process should begin automatically. If it sputters, the system is probably overtaxed again and the labor department will post an alert on its site.

TIP: When certifying, use the same zip code that you used to register for unemployment benefits.

The Q&A: Answers from the Labor Dept.

Thanks to everyone who has written in with their jobs story or questions. It helps inform my reporting. In return, here are answers from the Department of Labor. Thanks to deputy director Cher Haavind and her team for responding. If you have a question, ask me at tamara@coloradosun.com. These are edited for clarity:

Q: I am helping a friend trying to get a mistake on his unemployment fixed. He called at the end of August and explained the situation and was told they could not give him a phone appointment until Sept. 25. The weeks after the mistake would keep him from getting his benefits. My wife has to log into her account with an incorrect birth date that has not been fixed since April. — Green Guards

A: If the customer needs to update their address, email or telephone, the virtual assistant directs the customer to login to MyUIClaimant or their Pandemic Unemployment Account to do so. The virtual agent also responds to 70 frequently asked questions, including:

Q: For the $300 LWA benefit, they want you to certify that unemployment “is due to the disruptions caused by the COVID-19 pandemic.” None of us were initially unemployed due to COVID. However, we have not been able to find jobs because of the pandemic. We don’t want to answer this question wrong and potentially commit fraud. But we also don’t want to answer it wrong and miss out on benefits that we desperately need. –Jenny

A: You can certify. The nature of the certification question is to attest that the pandemic is the reason that they are not re-employed at this point.

Q: I have Stage 3 cancer. I’m off work at my doctor’s orders. My benefits have been stopped and I have been told to look for work. Any ideas as to what I can do to get my benefits restored? ~ Jeff

A: We would suggest that they focus on skill development, networking and other allowable work search activities at this time, so that when they are in a position to look for a job they are a more competitive candidate.

Q:  If a claim is deemed fraudulent, will there be a change of status like “Denied” or something else? — Multiple readers

A: It will say “Program Integrity Issue.” But if your claim is legitimate, don’t give up. This reason also means more investigation is needed by the department. If the person calls the PUA hotline, the customer service agent will flag the claim and move it to another queue for investigators if it’s not already there. Many of the claims still on hold lack proper identification. But if you have a legitimate claim that is denied even for fraud, you can appeal.

NOTE: I’ll be delving more into holds in a story next week. If your account is on hold with issues you don’t understand, email me with the wording of those issues to help me report on this.

8.7 million: Queries since July to the state’s virtual agents (at or phone), that’s up 100% from last week.

46,000: Callbacks made to folks scheduling an appointment through the virtual agent.

30%: Number of scheduled callbacks with “no shows.”

470: Number of people at the back of the callback wait list who were contacted this week and rescheduled to an earlier slot.

Every year, the Secretary of State’s office hosts the Go Code Colorado technology competition to encourage residents to use data and technology to solve a problem. Last year, four teams won a total of $60,000, including the idea for an app called Position My Kitchen to help food truck vendors find the optimum spot to set up. A new challenge this year is to develop a tool or service to help business decision makers in Colorado. Every winning submission will get $1,000. >>

That’s it for What’s Working this week. Send me your job and unemployment stories, tips and comments to tamara@coloradosun.com.