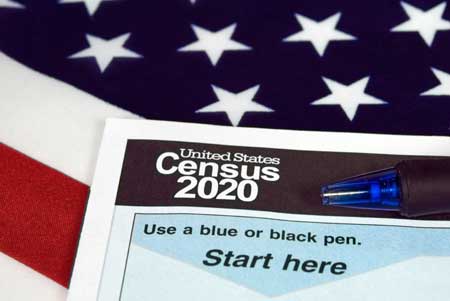 WASHINGTON — After months of delays, the U.S. Census Bureau on Monday started to distribute data that will be needed to redraw their U.S. House boundaries: an updated tally of how many people live within their borders, and the number of House districts that each state will have for the next decade.

The Census Bureau released the apportionment data, which captured the counts of state-level populations used to make sure that the number of House seats is proportional to each state’s population. Population growth in North Carolina gives the state a 14th House seat and another electoral vote for the 2024 and 2028 general elections, the census count shows.

The official count of 10,439,388 North Carolina residents and an additional 14,560 living overseas brought the state’s apportionment population to 10,453,948 in 2020. Only military and diplomatic personnel and their families were counted overseas. That means, each of the 14 House members representing North Carolina would represent 746,711 North Carolinians both in-state and overseas, on average.

After assigning every state one seat, the Census bureau used an “equal proportions” method to calculate each state’s priority values for the 51st to the 435th seat.

Because the House must remain at 435 lawmakers, seven states will have fewer representatives, after either losing population over the last 10 years or not growing as quickly as other states. New York, California, Illinois, Michigan, Ohio, Pennsylvania, and West Virginia all will see their federal delegations shrink by one legislator starting in 2023.

Minnesota will not gain or lose any House districts despite some projections that it could lose a seat.

Population growth in North Carolina has slowed compared to a decade ago when the growth rate was 18.5%, almost double the rate recorded by the 2020 census. This decline is in line with the national trend, but still slightly higher than the national average.

The state gained one seat after the 1990 census and another in 2000. North Carolina has experienced steady population growth in the past few decades; the last time it lost a seat was in 1960.

“Today’s announcement that North Carolina will gain an additional congressional seat points to our state’s continued growth,” Executive Director of Common Cause NC Bob Philips said in a statement. “It also highlights the critical need to ensure that no community is left behind or marginalized by this year’s pivotal redistricting process.”

For state officials in charge of redrawing district boundaries every 10 years, Monday’s data release offers certainty on only the beginning of what they need to complete the once-a-decade redistricting process for both Congress and their state districts.

States also need block-by-block population data in order to draw districts of equal population. That data will be released to states in a less user-friendly format on Aug. 16, with the fuller version to be sent by Sept. 30, according to the Census Bureau.

The data delay has upended state redistricting timelines, particularly for those with constitutionally set deadlines for when officials must approve new district maps.

It also has wreaked havoc on the 2022 elections, with prospective candidates uncertain whether they’ll still be living within a district’s boundaries.

Typically, the state-level population data released Monday would have been provided by the end of December of the census year, but that process was delayed due to the COVID-19 pandemic.

The census tallies how many people are living in the U.S. on April 1, and last year, that date fell shortly after states had issued lockdown orders aimed at curbing spread of the coronavirus. That scrambled plans for following up door-to-door with those who did not fill out the form.

“We advertised on pizza boxes, instead of during basketball games,” said Ron Jarmin, acting director of the Census Bureau. “Our partners joined us in reaching people at food banks and in school cafeterias, instead of promoting the census at county fairs.”

Other Americans became harder to reach due to wildfires and hurricanes. The Trump administration also interfered in the counting process, pursuing policies that some feared would make immigrants less likely to respond and cutting the operation short.

As they announced the new population figures, Census officials defended the accuracy of the counting process, saying the delayed door-to-door follow-ups allowed for more complete responses.

While the final numbers show a slower growth rate than what had been projected, affecting the final allocation of legislative seats, the population numbers for most states were still within 1% of the bureau’s estimates.

Under the new congressional districts, which will go into effect for the 2022 elections, each member of the House will represent an average of 761,000 residents.

The biggest population gains regionally were in the South and the West, with Southern states growing by 10.2% and Western states by 9.2%. The Northeast grew by 4.1%, and Midwestern states showed a 3.1% rise in population.That followed trends underway since the 1940s, with 84 House seats shifting South and West during that time frame, Census officials said Monday.

Nevada, for example, was among the top five fastest-growing states, with its population of 3.1 million people reflecting a 15% increase compared to 2010.

Six states will have only one legislator in the House. Montana is no longer among that group, with the 94,810 residents it gained proving enough for it to nab the second-to-last seat.

Yanqi Xu contributed to this report.