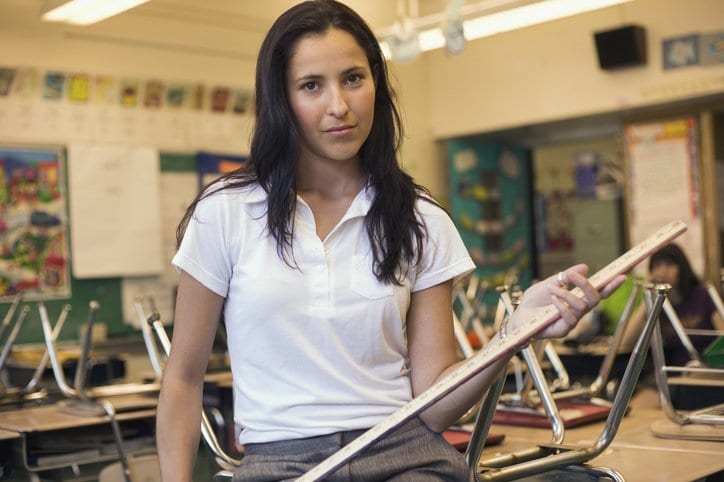 Misbehaving “Lone Star State” whippersnappers best watch their booties, because according to reports, at least one school district in Texas is bringing back old-fashioned corporal punishment like spanking come next August.

Late last month, the Pampa Independent School District board of trustees voted 4-3 to reinstate a deprecated student discipline policy from the 90s that had allowed teachers to handle misbehaving students with some old-fashioned corporal punishment.

“It was a hard decision, we deliberated for about six months,” board president Richard Qualls told local station WOAI.

“The corporal punishment is a controversial topic because some people are for it, some are against it,” district superintendent Tanya Larkin added.

“They’ve been talking about the policy since August and we have done surveys, focus groups, research, testimonies, etc.,” she continued in an interview with The Pampa News.

“The Board has taken an exhaustive look at whether or not to reinstate the corporal punishment policy the district once held. It’s been a very difficult decision for the board because they see both perspectives.”

A page on the district’s website shows that it launched a corporal punishment survey for parents as early as last October.

“The Board of Trustees of the Pampa ISD have requested that administration conduct a study into the perceptions and processes involved in utilizing corporal punishment as part of the student discipline plan at all Pampa ISD campuses. We are seeking your thoughts on this matter,” the page reads.

“Corporal punishment is defined as ‘spanking, hitting, whooping,’ and is the use of physical force with the intention of causing a child to experience pain, but not injury, for the purpose of correcting or controlling the child’s behavior.”

“I’m really proud of our District’s approach to having the conversation and investigating everything,” Larkin added. “No matter where you land [it’s important for you to] respect the process, and I think we did a really good job of making sure all voices were heard.”

It’s unclear exactly why the district began pursuing this policy change in the first place and exactly how much corporal punishment will be allowed.

“It’s not against state law or federal law to administer corporal punishment. There are policies that you have to follow and as long as we have them in place and follow them, it should not be an issue,” Qualls pointed out to WOAI regarding his own state.

What’s also known is that student behavior in some districts has grown so bad — in part because of lax school discipline rules instituted by former Barack Hussein Obama’s administration — that it’s been driving away quality teachers.

“According to a study released last year by the Economic Policy Institute nearly 14% of America’s teachers are either leaving their school or leaving teaching altogether, and school systems are having a hard time replacing them,” St. Louis station KDNL reported last month.

One Alabama teacher whom the station spoke to said he left his job as a public school teacher after only two months because of bad student behavior.

“After four years of college and thousands in student loans, this former middle school science teacher called it quits,” the station noted. “He began having his doubts, he said, from the very first day.”

“He was told he’d teach about 24 students per class. The reality was between 32 and 36. And some of those students made it impossible for him to teach and for others to learn.”

“Having students playing video games on their phone, just getting up, walking around, yelling at each other as if they were just hanging out at the house instead of at a school where they were there to learn,” he said.

And his only option was to simply “write ’em up.”

“Write ’em up. Write ’em up was just kind of the thing. Write them up, and if they get so many write-ups, then we’ll deal with it then,” he explained.

In some districts across the country, however, write-ups are completely useless because they never lead to any actual discipline. Thanks to a law signed by California Gov. Gavin Newsom last September, for example, as of July teachers in California will no longer be allowed to suspend elementary and middle school students over misbehavior.

The law was pushed by identity politics-obsessed politicians who falsely believe racial disparities in school discipline are attributable to racism.

We must eliminate willful defiance suspensions throughout the state if California is serious about addressing racial disparities in our school discipline system — and if we are committed to reducing the number of Black and Brown people we put behind bars.https://t.co/jwmoKOyCgY

Now, of the states where corporal punishment still remains legal, only a select few actually apply it, including Kentucky.

“In 19 Kentucky school districts, when a student misbehaves, teachers or principals can still use a paddle to spank students on the behind. Last year, educators used paddling to discipline students at least 284 times — mostly in Eastern and South-Central Kentucky. The state keeps track of how often schools use it, and on who,” station WKMS reported last month.

Part of the reason corporal punishment remains an option for discipline in Kentucky is because of “pressure” from parents, according to Kentucky Youth Advocates executive director Terry Brooks.

“We’ve heard more than once that the superintendent and/or the school board would like to ban it, but they face community pressure not to,” he explained.

“For a lot of folks, that paddle represents orderly and safe environments. You know it’s like ‘we want you to be tough on kids, you got to take a strong stand.’“