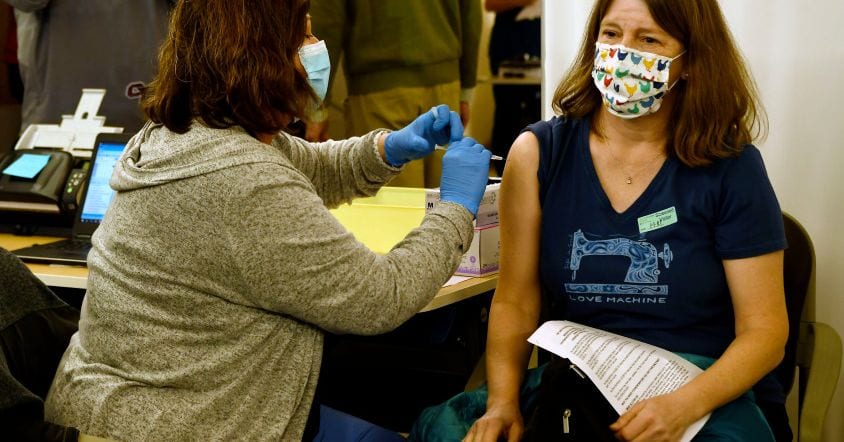 Teachers and other school staff must wait for COVID vaccinations until after first responders and people 70 and older are vaccinated, state officials told local public health agencies Tuesday.

The updated direction will halt vaccination of school staff and other essential workers in Colorado after this week, said Karen Miller, the nurse vaccine manager for the TriCounty Health Department, which serves Adams, Arapahoe, and Douglas counties.

Educators cheered the news last week that Gov. Jared Polis had moved them up in the state’s vaccine priority list, as most districts planned to bring students back to the classrooms this month.

But without a clear state plan, different districts have taken different paths — with some staff getting their first shots this week and others unlikely to have a chance until March. That disparity has generated confusion and frustration and raised concerns about how fairly the state and the chosen providers are distributing the vaccine.

The suburban Cherry Creek School District started vaccinating school nurses and health staff on New Year’s Day and laid out a plan to have all 9,000 staff members vaccinated by early February. On social media, teachers in other districts said they had made appointments with private pharmacies using their district ID badges as proof of eligibility.

“Last week this updated guidance definitely came as a surprise. Everyone is eager to get vaccine in arms, so we are aware that some school personnel have been vaccinated, but it will stop after this week,” Miller said. “They’ve received further direction that the priority is the 70 and older population.”

By Tuesday afternoon, the Colorado Department of Public Health and Environment confirmed it had sent a letter to vaccine providers clarifying that they should prioritize first responders and older Coloradans before vaccinating school staff. The letter directs local public health agencies to plan to administer vaccines to teachers and other front-line workers after Feb. 28.

“It’s not anybody’s fault that this happened,” Miller said. “There wasn’t clear guidance. There was some confusion.”

A Cherry Creek spokesperson said the district is following the state’s vaccine priority plan as released last week and will continue as scheduled.

“This week, we are working on vaccinating school psychologists, social workers, and special education paras and will be moving on to educators next,” spokesperson Abbe Phillips wrote in an email.

But Centura Health, which partnered with Cherry Creek and other school districts, must follow the state’s new guidance.

Dr. Shauna Gulley, Centura Health senior vice president and chief clinical officer, said that as guidance has “evolved,” Centura will follow it and vaccinate only groups that the state identifies.

Some school staff will still qualify. In school districts, for now the priority may be health care workers, physical therapists, and COVID screeners, Gulley said.

Colorado has created three priority levels for administering vaccines, with two groups, 1A and 1B, within the first. Phase 1B, which includes teachers, also includes health care workers who don’t work directly with COVID patients, first responders, people 70 and older, and some essential workers. State officials estimate that more than 1 million people fall into this category.

The state further split the categories in Phase 1B by a dotted line, rather than by creating another group. Colorado is asking providers to vaccinate those groups listed above the dotted line first. School staff and other essential workers fall below the dotted line.

Asked about a timeline for educators, the governor’s office last week said teachers could expect to be vaccinated in February or March. Tuesday’s updated guidance reiterates that providers should plan to give teachers their first shots at the end of February, depending on the supply of vaccine from the federal government.

“Our top priorities are saving the most lives and ending the crisis brought on by the pandemic as soon as possible,” Conor Cahill, a spokesman for Polis, wrote in an email. “Right now Colorado is laser-focused on completing phase 1A and moving quickly on to vaccinate Coloradans who are over 70, which make up 78% of the deaths in the state, and expects to move to educators and other frontline essential workers in March.”

The announcement that Cherry Creek already was vaccinating school staff led some parents and teachers to ask why Denver Public Schools wasn’t doing the same. Tay Anderson, who serves on the Denver school board, said it’s upsetting that staff in a wealthier, smaller school district were being vaccinated before teachers in Denver. Nearly a third of Cherry Creek’s 54,000 students qualify for subsidized school meals, an indicator of family income, compared with nearly two-thirds of Denver Public Schools’ 92,000 students.

“DPS is not trying to have people risk their lives or feel like they’re unsafe to come to work,” he said. “We’re trying our hardest to get folks vaccinated.”

He said districts shouldn’t have to compete for access to the vaccine.

On social media, teachers from across the state reported scheduling appointments to get the vaccine at private pharmacies using their district ID badges. But corporate spokespeople for several pharmacies in Colorado, including Safeway, CVS, and Walgreens, said they are focused on vaccinating people who have higher priority on the state’s new list.

“We look forward to eventually moving into other phases with the state as more populations become eligible for vaccination,” CVS spokesperson Monica Prinzing said.

A Cherry Creek spokesperson said some suburban districts had joined in a partnership with Centura to more quickly vaccinate school staff. A spokesman for the Sheridan district confirmed that as part of that partnership letters had gone out from Centura inviting school nurses and other staff to make vaccine appointments, with workers who could be classified as first responders ahead of classroom teachers.

Amie Baca-Oehlert, president of the Colorado Education Association, the union that represents many teachers, bus drivers, cafeteria workers, and other school staff, said the lack of a clear plan has caused confusion.

“When educators found out, they welcomed that news, and they started calling their districts, their health care providers, and even us, saying, “When can we come in and get the shot?’” she said. “It’s become clear that this is going to be district by district, working with local public health, and it does look like it is going to be late February or early March before most educators get the first shot.

Many district leaders hope the vaccination of teachers and other school staff will provide peace of mind to people working in classrooms and will reduce the disruptions caused by frequent quarantines.

However, Polis has said repeatedly that the reopening of school buildings should not depend on teachers being vaccinated. District plans mostly call for a phased return to the classroom this month, while widespread vaccination of school staff would take much longer than that.

For now, state officials control the distribution of vaccines, Miller said. Local public health authorities helped to identify which providers such as hospitals and pharmacies could administer shots to large numbers of people, but state officials are the ones who decide how much goes to each site.