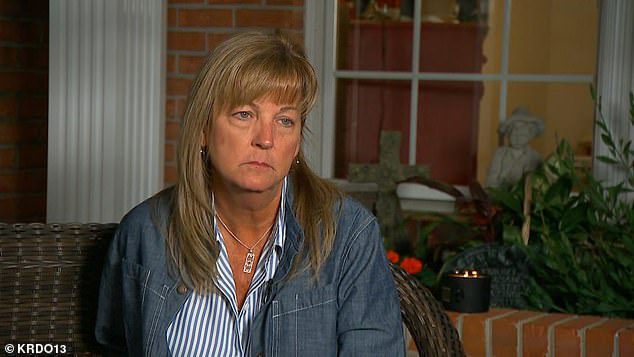 Suzanne Morphew’s sister revealed that the missing mother of two shared fears for her safety shortly before she was reportedly murdered by her husband Barry.

Melinda Moorman called the local Colorado station Heart of the Rockies Radio on Saturday and recalled how her missing sibling had sent a series of ‘telling’ text messages shortly before her disappearance in May 2020.

“She certainly had the impression that she was concerned about her safety and that the state of their relationship, I think, had deteriorated quite a bit in recent years.” she said in reference to Suzanne’s relationship with her husband Barry.

Suzanne Morphew’s sister Melinda Moorman (pictured) recalled how her missing sibling had sent a series of ‘telling’ text messages shortly before her disappearance in May 2020.

Colorado mother of two, Suzanne Morphew (pictured), went missing on May 10, 2020 and has not been seen since

Moorman lives in Sevierville, Tennessee, while Suzanne’s home was in Salida, Colorado.

Moorman explained that while she and Suzanne were not the kind of sisters who spoke daily or even weekly, the siblings “had a very intuitive and very close relationship and we were very connected.”

She added, “And when we spoke, it was much unspoken, but we shared a lot of similarities on our own travels personally, warlike, and she trusted my advice.”

Moorman said her sister sent her a ‘very deep’ text message just before her disappearance on May 10, 2020, although she does not elaborate on what was said.

“She was transparent with me, especially the Friday before she went missing, she revealed to me a very telling text that was very profound, very transparent and it showed the state of mind that Friday she disappeared.” she said to the radio host.

Earlier this month, Moorman claimed that before Suzanne’s disappearance, the Morphews had had money problems and “lived beyond their means.”

They lived in a large $ 1.6 million house in Salida, which was sold a few months after Suzanne disappeared. Barry had moved to a smaller apartment nearby before his arrest.

Although Suzanne’s body has not been found, the police have charged her husband Barry Morphew 52, with first-degree murder on May 5 this year.

That charge came nearly a year after the The 49-year-old mother of two has disappeared without a trace after allegedly moving out on Mother’s Day from the home she shared with Barry near Salida, Chaffee County.

Morphew sent her last texts to Moorman on the last day she was seen alive, May 8, 2020.

She was reported missing by her two daughters when they came home from a camping trip two days later on Mother’s Day, and they couldn’t find their mother.

Police still have not found Morphew’s body and Moorman shared her pain for not having a body to bury as the hunt for Suzanne’s remains continues.

It still weighs heavily, it is a very difficult complex grief that we endure and without her remains it is a devastating, heartbreaking place to live.

And we hope and pray that our remains will be found and that the person in charge will come clean and reveal the truth about where she is so that we can give her a proper burial and love her as she needed to be loved turn into . ‘ she said.

Moorman also insisted that she has ‘no joy’ in the arrest of her brother-in-law.

As a family of Suzanne, we are not happy about what happened to Suzanne or Barry or our beautiful nieces, or Barry’s family. We are heartbroken on every level and we are not satisfied with even his arrest, ”she said. It is a tragedy for all of us. the ripple effect is profound, our lives will never be the same again. ‘

Moorman added that “ it’s just beyond me ” when asked about allegations that Barry Morphew, her sister’s alleged murderer, used her sister’s ID to fraudulently vote for Donald Trump in the November 2020 presidential election.

When questioned by an FBI agent during the vote in April, Morphew said he submitted it because he “ wanted Trump to win. ”

“I know she (Suzanne) would vote for Trump anyway,” he reportedly told the agent.

Barry Morphew 52, ​​(pictured) was charged with first-degree murder in connection with the disappearance of his wife Suzanne in May 2020

Barry and Suzanne Morphew (pictured together) in happier times. Barry was charged with first-degree murder in Suzanne’s disappearance in May 2020

Police searched the Colorado home (pictured) of missing mother Suzanne Morphew, 49, as they investigated her disappearance

Suzanne was reportedly last seen by Barry on Mother’s Day morning, May 10.

Barry claimed he left their home early and traveled to Denver for a job as a landscape architect.

Officials were told that Suzanne went cycling some time after his departure, but no eyewitnesses saw her, and police have never been able to confirm whether or not she took a bike ride that day.

Suzanne was reported missing by a neighbor after her daughters Mallory and Macy were unable to contact her by phone when they returned from an out-of-state camping trip.

Her bicycle was found later that day on a rural road, a short distance from her home.

Barry said he had driven back to their house later that day before work started when he learned that his wife was missing.

The mother of two – who previously worked as a high school teacher in Indiana – was last active on social media the day before her disappearance when she posted a photo to Facebook with her two daughters.

A massive search was launched to find Suzanne, with more than 100 law enforcement officers, multiple sniffer dogs and dive teams combing the land and waters near the Morphews’ home.

But the hunt yielded no clues as to Suzanne’s whereabouts.

Barry promised a reward of $ 100,000 for all information leading to her safe return, matched by a family friend, bringing the total of the reward to $ 200,000.

Colorado police then revealed that they had found a “personal item”, believed to be a bicycle helmet, belonging to the missing mother about 500 yards from her home.

Later that same month, investigators conducted their first search of the home she shared with Barry. They were seen carrying evidence bags and equipment from the property.

A three-day search was also conducted on a residential building site in Salida, about 12 miles from the couple’s home, where Barry had been paid to build garbage.

In July, investigators conducted a second search of the $ 1.5 million Morphew home. The couple is said to have had money concerns, with Barry Morphew selling the luxury home shortly afterwards.

DailyMail.com then exclusively revealed in September that Barry had spent the night before Suzanne was reported missing at a Holiday Inn hotel in Denver for a job as a landscape architect – and left the room stinking of chlorine.

Barry’s colleague Jeff Puckett told DailyMail.com that he took over the hotel room on May 10 and found it strewn with wet towels and reeked of chlorine.

Puckett said he was sent by Barry to Denver that morning but did not see him because he had already left “because of a family emergency.”

“I got there on Sunday night and the room really smelled like chlorine,” he said.

“It was his room, and he’d taken a shower — his towels were all over the floor.”

The hotel confirmed to DailyMail.com that they do not use chlorine to clean rooms and had handed over security footage from the weekend of May 9 to police.

An unnamed friend of the 53-year-old told The Sun Monday that Morphew “knows the forests and Colorado better than anyone else” and “there’s no way in the world” that police would find his wife, Suzanne’s body. .

“If he’s guilty, I doubt anyone will ever find the body,” said the friend, who didn’t mention The Sun. “He knows those forests and Colorado better than anyone else – he hunted and fished every day of his life.”

He added that the police would not be able to “ cover that much ground, ” saying he would be shocked if the police found Suzanne Morphew’s body without anyone coming up and saying, ‘Hey , this is where it is. ‘