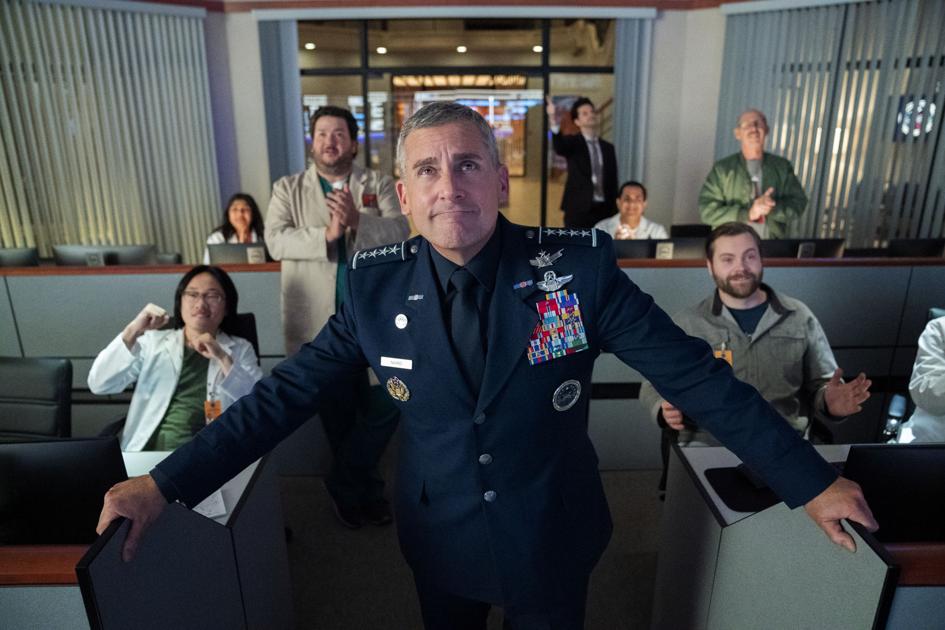 The premise: Mark Naird (Steve Carell) is a decorated pilot who has just risen to the rank of four-star general in the Air Force. But after his promotion, Naird’s career plans are derailed when he finds himself called upon to lead the newly formed sixth branch of the U.S. military — Space Force. He uproots his family and moves to a remote base in Colorado outside of Wild Horse, where Naird and a colorful team of scientists are tasked by the White House to achieve total space dominance.

The Netflix workplace comedy was created by Carell and the man behind the U.S version of “The Office,” Greg Daniels.

Highs: When a series is touted as coming from the star of “The Office” and the showrunner of the American iteration of the popular series, there’s bound to be thoughts that “Space Force” is “The Office: Space Edition.”

There are several parallels between this series set in the town of Wild Horse, which in reality is a small unincorporated village on the eastern plains of Colorado, and the one set in the sixth-largest city in Pennsylvania. The most notable similarity comes from a familiar source, a character played by Steve Carell.

Gen. Naird and Michael Scott are both extroverts who are impetuous, know-it-alls who often lack tact. For example, when Naird runs into a problem early in the season, his first impulse is to use a bomb, although a delicate touch is required. After being talked out of the idea, he decides a trained chimpanzee is the answer, which he calls a chimpstranuat, but this only makes the situation worse.

Naturally, Naird is viewed by most of his staff as unqualified for his job. However, like Michael Scott, Naird is also a surprisingly good leader who often manages to say and do exactly the right thing at precisely the right moment. This makes him likable despite his many flaws.

The yin to Naird’s yang is Dr. Adrian Mallory (John Malkovich), a top scientist and Naird’s civilian adviser. Mallory is the straight man to Naird’s humorous blowhard. The pair have a love/hate relationship, with each believing they’re always right. As the season goes along, Naird and Mallory develop into a solid, albeit diametrically opposed, team that’s fun to watch.

“Space Force” has several other notable characters. Lisa Kudrow as Naird’s wife and Fred Willard as Naird’s father shine when onscreen. The meetings of the Joint Chiefs, played by Jane Lynch, Diedrich Bader, Patrick Warburton and Noah Emmerich, are always hilarious. These moments, although brief, are one of the show’s highlights.

A dash of military humor, often at the expense of the either the Coast Guard or the Space Force itself, as well as a nod to the U.S. Air Force Academy, make this a series veterans will likely be attracted to.

Lows: When not the focal point of a series, a lead character’s children are either a crippling distraction (Dana Brody from “Homeland”) or eventually fade into obscurity (Connor Donovan from “Ray Donovan”) so the relationship dynamic rarely pays off. It’s unclear which path Gen. Naird’s daughter Erin (Diana Silvers) will eventually fall into, but she takes away precious camera time from more interesting characters.

The biggest issue with “Space Force,” however, is its lack of consistency. Several secondary characters with a lot to offer are only seen sporadically. Political liaison and obvious Russian spy Yuri (Alex Sparrow) and annoying media consultant Tony (Ben Schwartz) are severely underutilized, leaving the comedic burden mostly on Carell. The humor can also be erratic. Some jokes are laugh out loud funny, but others are complete misses. Even Carell’s voice lacks consistency. Sometimes he speaks in a regular tone, but other times he’s channeling his inner Clint Eastwood.

Grade: (B-): Most people don’t remember this now, but after it’s brief six-episode first season, the outlook for “The Office” seemed grim. Poor ratings and an unlikeable lead made it a show destined for cancellation. A change in NBC management led to the series surprisingly being renewed for a second season. The show found its voice and the rest is history.

Despite a rough start, “Space Force’s” impressive pedigree hints at its considerable potential and, after six episodes, provided plenty of clues that it will gradually find its way. An excellent cast and moments of sincere hilarity make this a comedy worth taking a chance on.

Gazette TV critic Terry Terrones is a member of the Television Critics Association and the Broadcast Television Journalists Association. You can follow him on Twitter at @terryterrones.