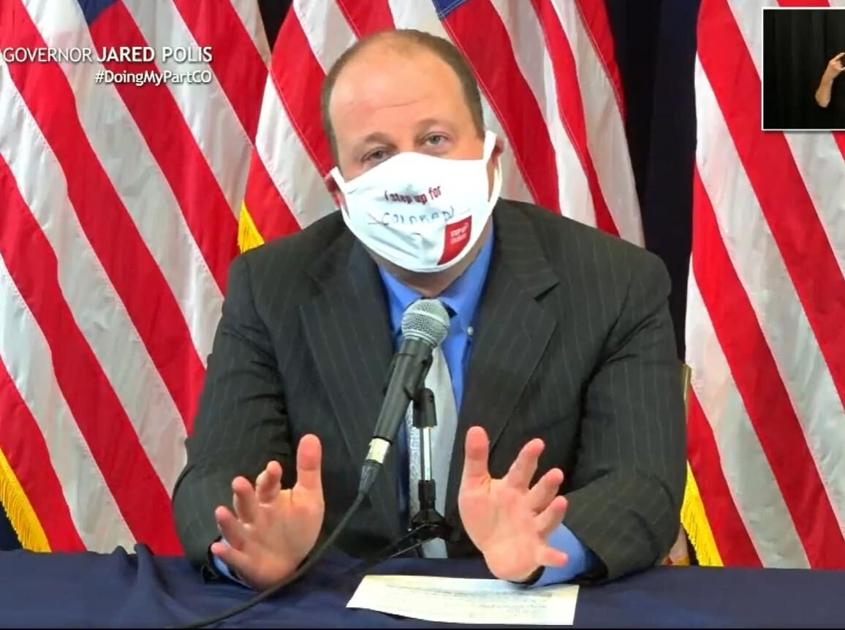 With cases of COVID-19 surging in nearly half the state, Gov. Jared Polis on Tuesday announced a media campaign pleading with Coloradans to take seriously the precautions needed to prevent more cases of the coronavirus.

The campaign, called Step Up Colorado, launches on social and digital media, and on TV and radio in the coming weeks. The campaign, which is being paid for with federal CARES Act funds, will run through the end of the year, Polis said. It will emphasize the importance of wearing masks and maintaining social distancing of at least 6 feet.

“I know we’re all tired of this,” Polis said of the precautions and restrictions. “We have a short window of time to get this back under control before the holiday season.”

Colorado reported 1,208 new cases of the virus Tuesday, and a positivity rate — the percentage of tests that come back positive — of 6.24%. The World Health Organization recommends a positivity rate of less than 5%.

Polis attributed the growing outbreak to small gatherings and encouraged people to congregate with no more than one other household.

Hospitalizations also are on the rise, Polis said, with 417 Coloradans now hospitalized because of COVID-19, the disease caused by the coronavirus. That’s about one out of every four beds, the governor said, but that does not mean the state has 1,800 beds just for COVID-19 patients. Those beds are also needed for people with other medical issues, such as heart attacks or injuries.

The governor noted his reluctance to impose a statewide mask mandate, which he did July 17 and which has been extended several times. It requires people to wear face coverings in public placers indoors.

“It was tough for me to do a statewide mask order, but what convinced me to do it” was that Coloradans were not wearing masks but would do so if the governor said so, and “they wanted me to formally say so.” The order led to a 20% increase in mask-wearing, Polis said during a news conference.

The one piece of good news: Boulder County, which was a coronavirus hotspot just three weeks ago, has reduced its daily COVID-19 count from 150 cases per day to about 25 or 30. That drop is due to strong measures implemented by the Boulder County Public Health Department, Polis said.

But state epidemiologist Dr. Rachel Herlihy had a sobering update on the trajectory of the virus. According to the Colorado Department of Public Health and Environment’s data, four counties have reached the worst rate of infection, the “Stay at Home” level, although requiring those counties to take that step is not yet being considered. The counties are Adams, and on the northeastern plains, Logan, Sedgwick and Yuma.

Jill Hunsaker Ryan, the agency’s executive director, said officials have asked counties with surging case counts to develop mitigation plans, and most have done that. The department will check in again in about 10 days, she said, and will decide then whether to move to more stringent measures or, if they’re able to decrease their case counts, relax restrictions.

Modeling that shows ICU bed capacity could be overwhelmed in the coming months. The transmission numbers at right show that Colorado is social-distancing at 66%, meaning people have reduced their social interactions by 66%. However, the state goal is 75%. Courtesy CDPHE.

• Polis announced a $1 million grant program, also funded with CARES Act dollars, to help Colorado farmers and ranchers, especially if federal aid has been insufficient to help them deal with the effects of the pandemic.

The program is the Colorado Farm & Food Systems Respond & Rebuild Fund, and applications will be accepted through Nov. 9. Grants will be distributed by the independent Colorado Farm & Food Systems Response Team, “a group of 14 food-systems organizations that has already allocated more than $370,000 in donor funds to producers and intermediaries in 2020,” according to the program’s website.

Those eligible for grants include small and mid-size producers with annual gross revenues of between $1,000 and $1 million from sales to farmers markets, restaurants, consumers, schools, stores and other purchases. Those who sell within local and regional Colorado markets are also eligible, as are food processors.