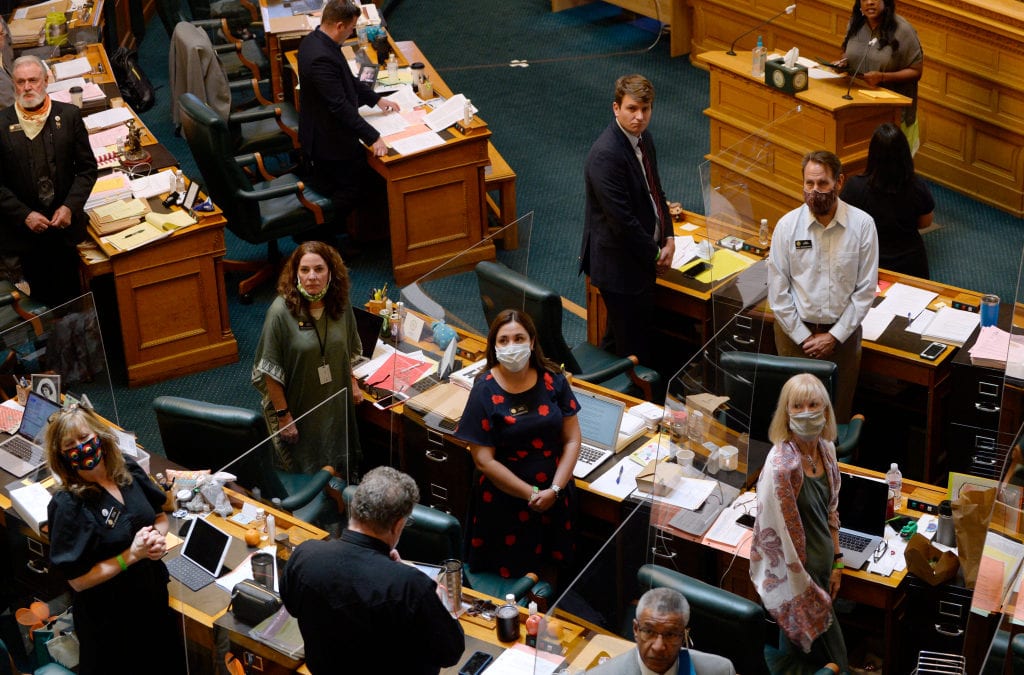 Colorado’s new police reform law was heralded as one of the most comprehensive police reform packages in the country, but it contains one key loophole, excluding hundreds of state-employed officers from facing personal liability for their actions because the potential hit to the state budget would have been too great.

The end result is a law that, according to local law enforcement officials, will be unevenly applied in order to protect the state from costs from the anticipated increased litigation the law will spur.

“We’re very supportive of accountability and transparency, and think when the Legislature considers the costs for any bill to the state, they also need to pay attention to that same cost to the local governments,” said Boulder County Sheriff Joe Pelle, who testified about Senate Bill 217 for the County Sheriffs of Colorado. “What’s important is that as we consider additional measures, they are considered equally and it’s applied across the board.”

At issue is a provision within S.B. 217 that opens officers personally to civil litigation and leaves them vulnerable for up to $25,000 of any judgment against them. Previously officers acting under government authority were largely immune to lawsuit awards, which taxpayers ultimately paid.

Other provisions of the law, including banning the use of chokeholds and carotid control holds, limiting when police are allowed to shoot at a fleeing person, and requiring body cameras do apply to state employees.

The difficulty wasn’t the premise behind the bill, Soper said, but rather the financial hit the state would take. The final tab was about $2 million in the first year and $3.2 million in the second, according to a state fiscal note prepared for legislators. Risk management, an additional 40 claims a year for state lawyers, the costs to defend them, prisoner claims to exceed another 120 lawsuits, and the extra work on the state’s court system all figured into the tally.

“Using the data from my bill, they knew from the get-go that any fiscal hit would doom their chances,” he said.

Herod said state officers were left out of the personal liability portion of the bill because it lacked support in Soper’s bill.

“That portion was simply not supported,” Herod said. “Many other things were not in the bill because the support wasn’t necessarily there. We said all along it wasn’t the end-all, but it’s a great place to start.”

Sen. Robert Gardner, R-Colorado Springs, was among a group of legislators who worked to amend the bill in the Democrat-controlled legislature and was angry to see that the “skin-in-the-game” provision wasn’t applied equally.

“It’s wrong of us as a legislature to tell municipalities and counties that they are subjected to a kind of liability, of financial risk, and the state’s not willing to incur that same risk or follow that same standard,” said Gardner, who voted for the bill. “It’s wrong.”

Denise Maes, the public policy director for the ACLU of Colorado and a chief crafter of S.B. 217, said proponents of the bill were trying to find a balance that set the right level of liability for officers and would help make victims whole. The goal was “to promote good policy.”

Omitting state-employed officers – a list that also includes campus police, wildlife officers, revenue agents, and attorney general investigators – was an effort to “not do too much,” Maes said.

“There was to be a fiscal note associated with the state patrol and state officers with an amount that was a bit more than the sponsors could swallow,” Maes said. “We were OK with letting it go (keeping state officers out of the personal liability portion of S.B. 217) because the movement was calling for the most interaction between the community and law enforcement, and that clearly is the sheriff and the local police officer.”

Several members of the law enforcement community are steamed that money was behind it all.

“It was going to cost the state too much money, the liability was too much and it would have sabotaged the bill to keep it in. Nothing costing the state money was going to pass,” said Tom Raynes, executive director of the Colorado District Attorneys’ Council. “They all have the same job, the same ethical code, the same professional code, but they’re being treated differently; you can’t include one and not the other.”

A spokesman for the Colorado State Patrol said the agency had no comment on the bill, its provisions or its impact.

The costs to municipalities to comply with S.B. 217 would be large no matter whether state-employed officers were included. Body cameras will need to be worn by all officers – the state agencies included – within two years and provisions to store all of that videotape must be made by then as well.

“When legislation is shot out of a canon like this, it takes some time to iron out and see what it means going forward,” said Kevin Bommer, the executive director of the Colorado Municipal League. “How is a deputy’s job substantially different than a corrections officer at the state level? It makes no sense to me. Our focus isn’t to say it’s not fair. We’re working to understand how to implement the law and make future overtures … for discussions of clean-up and reform.”