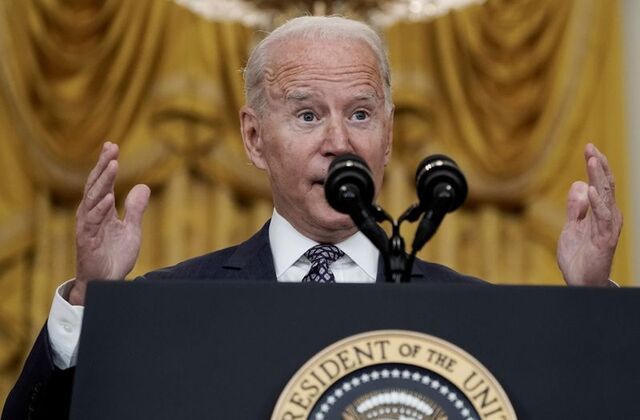 President Biden issued a legally dubious mandate that 100 million Americans get the COVID jab as a desperate attempt to change the subject from his disastrous Afghanistan strategy that has Taliban terrorists back in control on the 20th anniversary of 9/11.

Fox 31 news reports 800,000 Coloradans fall under the category created by Biden that requires employers to force their workers to either get vaccinated, or tested weekly in order to keep their jobs.

For Democrats, Biden’s actions have the added political advantage of stirring up a hornets nest of controversy around the already contentious vaccines.

Republicans will rightfully challenge the president’s mandate as unconstitutional, unAmerican, and downright tyrannical.

Then, Democrats will eventually label them as anti-vaxxers for opposing forced medical treatment as Americans head to the ballot box in November for gubernatorial and municipal elections in numerous states.

But for now, Dems are keeping their powder dry, waiting to see if Biden’s gambit pays off.

We are the party that defends your rights. #copolitics @GOP https://t.co/9Jl4OThIVV

Politicians should not have the right to order Americans undergo medical treatment no matter the public health crisis.

The vaccine has saved lives, and I am grateful for that. We should trust the American people to make healthcare decisions and consult with their doctor.

Mandates do not work, and I oppose them. pic.twitter.com/SxYlrWDlUO

What next? Forced sterilization or abortions to control overpopulation and tackle climate change?

He’s forcing businesses barely getting by to fire workers who don’t comply with testing or forced vaccinations.

Of course that’s an outlandish idea, but so is Biden’s vaccine mandate.

Colorado Democrats have been distancing themselves from Biden since the Afghanistan withdrawal. With the exception of U.S. Rep. Diana DeGette, the entire Democrat delegation is mum on the mandate.

We are never going to end this pandemic if we don’t get more of the country vaccinated.

The president’s plan to increase vaccinations, provide boosters and require masks is a tremendous step in the right direction.
#GetVaccinated

If Americans are dragging their feet on getting the shot because they don’t trust what the government and media are telling them, then Biden’s order will have the opposite effect on the number of vaccinations.

And Democrats will use that resistance to their political advantage. Mark our words.

This isn’t about science, this is about politics.

“This is not about freedom or personal choice.” – Joe Biden

This entire country is about freedom and personal choice.

If you don’t believe in that, you should leave.