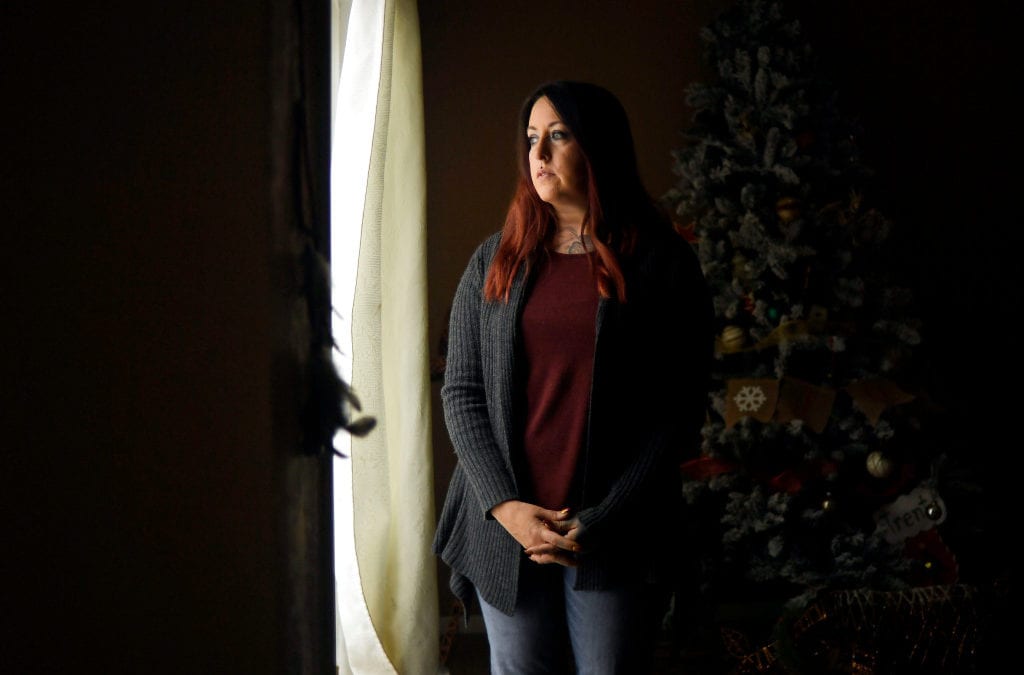 A combination of extended lockdowns, short staffing and rising anxiety about COVID-19 has created a situation in Colorado’s prisons that the director of the state’s prisons called “tenuous” and that has outraged inmates’ families.

Prisoners are fed substandard meals — sometimes as little as two slices of bread, a piece of bologna, and an apple — and sometimes are not able to access showers for days at a time, eight families and a former guard said. Staffing is stretched thin as guards fall ill and hundreds are placed on leave on a given day. Some inmates go weeks without stepping outside.

“He just feels so less than human,” said Krystal Griffiths, whose fiancé is incarcerated at the Buena Vista prison.

And a change to the state’s vaccination priorities means conditions might not change for months.

While a draft plan placed inmates in the second phase of vaccinations, Colorado leaders later eliminated incarcerated people from any priority groups. Instead, they will be vaccinated in the same order as the general population, depending on their age and medical history, a decision that contradicts the recommendation of the American Medical Association and the National Commission on COVID-19 and Criminal Justice, a national group led by former U.S. attorneys general.

“They don’t have to be No. 1,” said Dr. Charles Lee, president-elect of the American College of Correctional Physicians. “But don’t make them number 10. Their punishment for whatever they did is loss of freedom, not absence of care.”

The state’s decision comes as the number of outbreaks in Colorado’s prisons continues to climb. More than 6,200 prisoners in Colorado have tested positive for COVID-19 since March. Jails and prisons make up eight of the state’s 10 largest active outbreaks. Seventeen men in the care of the prison system have died of COVID-19.

The rate of infection has led the Department of Corrections to scramble to fill positions when hundreds of staff are on leave at a time due to COVID-19. The department has asked retired corrections officers to fill in. Tensions have been high among staff and inmates, who fear catching the virus from each other, said Jamie Amaral, a former corrections officer at the Sterling prison who quit in September.

“The division that we had been trying so hard to break down between inmates and staff just grew,” she said. “Staff became angry at the inmates and inmates were irritated with staff because they couldn’t get answers. That was really tragic to see, to see that break down.”

Boxes of COVID-19 vaccine are kept in the freezer set under -30°C at UCHealth University of Colorado Hospital in Aurora on Thursday, Dec. 17, 2020. Colorado expects to spend the winter on Phase 1 of the state’s vaccine distribution plan, which includes inoculating frontline health care workers who are in contact with COVID-19 patients.

Prisoners are at a higher risk of catching COVID-19 and dying or suffering serious symptoms for several reasons, Lee said. They cannot socially distance themselves inside a prison and share bathrooms and sleeping spaces. They are often low-income people who have had poor, or nonexistent, health care their entire lives and several underlying conditions.

Colorado’s current plan is similar to those of 10 other states — Alaska, Arkansas, Florida, Kansas, Michigan, Oregon, South Carolina, South Dakota, Texas and Wisconsin — that do not specifically mention incarcerated people, an analysis by the Prison Policy Initiative found. At least 26 other states specifically planned to give inmates vaccines in either the first or second phase of supplies. As of Dec. 8, Colorado had the ninth-highest rate of COVID-19 infection of the state and federal prison systems, according to news outlet The Marshall Project.

Inmates’ families who spoke to The Denver Post had a wide variety of opinions on when their loved ones should be vaccinated. Some feared the vaccination would be forced on their loved ones. Others argued prisoners should be prioritized because they cannot practice social distancing. Several said their loved one already had the virus so the vaccine seemed less pressing than other concerns, like making sure inmates were getting enough food.

Jamie Amaral poses for a portrait in her home in Aurora on Friday, Dec. 11, 2020. Amaral is a former correctional officer at the Sterling prison who quit in September.

When inmates went on lockdown in Sterling in the spring, guards took over the kitchen duties usually performed by prisoners. That’s when the food became wretched, Amaral said.

“They were literally getting a slice of cheese, a slice of bologna, soggy pieces of bread, a juice packet, just things like that,” Amaral said. “The food was not enough to feed a 12-year-old. I would not eat it myself.”

Families of several inmates described similar meals, like a dinner of one tortilla, bell pepper pieces, an orange and a boiled egg.

“These are grown men, they’re getting like kindergarten meals,” said Felicia Alvarez, whose 29-year-old son is incarcerated at Sterling.

Skinner, the corrections spokeswoman, acknowledged that prison staff runs the kitchens when inmate workers cannot but said meals “are meeting the nutritional requirements and are served at proper temperatures in accordance with food safety guidelines.”

Williams said during a hearing Tuesday in front of the state legislature’s Joint Budget Committee that the extended periods of confinement have taken a toll on inmates. He commended staff for working during a dangerous pandemic and said there has not yet been any dramatic change in inmate behavior due to the changes. He said the prisons were safe, though situations remain “tenuous.”

“This is the opposite of everything we have committed ourselves to as a department in terms of advancing humanity and normalizing prisons for better results,” Williams said during the hearing. “That’s been a difficult part of this.”

Families of incarcerated men reported their loved ones sometimes did not get to shower for up to three days at a time. Others have not been outdoors for weeks or months. Griffiths said her fiancé had not been outside since August.

The mental health toll of the lack of food, connection and sunlight along with constantly living in fear of the virus is going to take a serious, long-term toll on inmates’ mental health, families said.

“They’re messing with the mental well being of our loved ones,” said Raeleen Woodbury, whose son is incarcerated at the Sterling prison. “You cannot take a human being, not give them proper food, not give them outside time, not give them visits, and expect them to be healthy rational people.”

The main entrance to the Buena Vista Correctional Complex is pictured on Feb. 12, 2020.

In the first half of December, between 381 and 531 Department of Corrections staff members were on leave each day due to COVID-19 diagnoses or a need to quarantine. That, coupled with about 107 unfilled frontline positions, meant that the prisons were strapped for crucial staffing, according to documents submitted by the Department of Corrections to the legislature’s Joint Budgetary Committee.

Prisons have subsequently been at “minimum staffing levels” and employees are working extended hours, according to the documents. To compensate, the department approached retired correctional officers to come back to work part-time, hiring expensive contract medical workers and temporarily assigning parole officers to work in the prisons.

The department declined two requests from The Denver Post to interview Williams.

Department officials pointed to their extensive testing — more than 116,000 tests had been administered to inmates as of Thursday — as an important accomplishment during the hearing. Workers in the prison receive rapid tests daily, Skinner said, along with weekly non-rapid testing. The department also hired an epidemiologist and a COVID-19 response manager on a temporary basis to coordinate testing, cohorting and treatment.

“The pandemic has really challenged this department on every front,” Williams said during the hearing. “There’s no overstating that, that’s just the facts.”